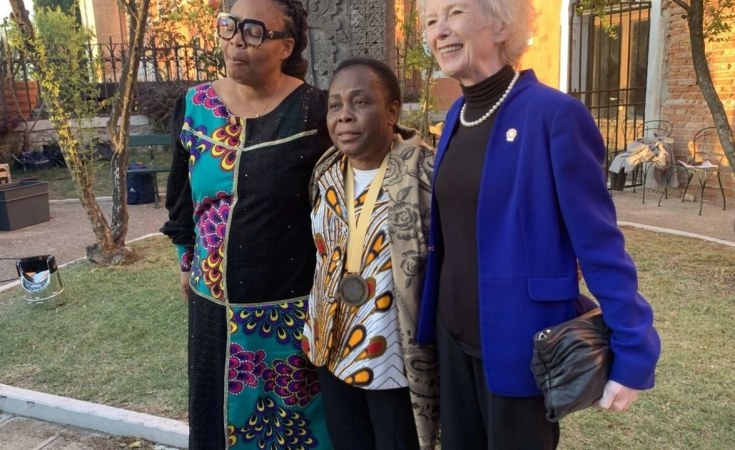 For more than 40 years Julienne Lusenge has been working tirelessly to help victims of wartime sexual violence in the Democratic Republic of Congo. Her courage and efforts to expose perpetrators and bring them to justice were finally rewarded at a special ceremony on the small island of San Lazzaro of the Armenians in the Venice lagoon on Saturday evening when she was declared the winner of the one million dollars Aurora Prize.

She broke down in tears but said she was so very happy and could not believe she would finally be able to do so much more for the many Congolese women who have been subjected to horrific abuse.

"This prize is very important for all Congolese people, Congolese women and Congolese girls because now we will have enough money to support them," Lusenge said after being honored with the award.

The Aurora prize for Awakening Humanity every year recognizes the extraordinary humanitarian work of individuals at a global level and the impact of their actions. Noubar Afeyam, one of the three co-founders of the Aurora Prize, described it as "a gift from the Armenian community to the world".

With Vartan Gregorian and Ruben Vardanyan, he instituted the award in 2015 on the centennial of the Armenian genocide to honor the memory of the victims, for 8 years, the number of years in which one and a half a million Armenians were systematically killed on the orders of the Ottoman Turkish government.

Their idea was to recognize unsung modern-day heroes, just like those who helped save Armenians that survived. "We are trying to find people today that are saving the lives of others, just like people saved the lives of our ancestors," Noubar said.

Four other Aurora humanitarians had been selected as finalists: Grégoire Ahongbonon, who helps people in West Africa with mental illness, Ruby Alba Castaño, a Colombian activist who protects the rights of peasants, Ashwaq Moharram, a Yemeni physician who provides life-saving support to starving people and Paul Farmer, an American medical anthropologist and physician.

Every year to honor these outstanding individuals, their names are inscribed in the Chronicles of Aurora, a manuscript created using ancient Armenian techniques, which was brought to the Venetian island and exhibited for the ceremony guests.

The award was named in memory of Aurora Mardiganian, who was forced to witness the atrocities of the Armenian genocide. It was the first time the Aurora prize ceremony was held in Europe. A special prayer for solidarity by the Armenian monks kicked off the events at the monastery in San Lazzaro island. Italy's world renowned tenor Andrea Bocelli provided an unforgettable performance for all those who attended, which includes two Nobel peace laureates, Iran's Shirin Ebadi and Liberia's Leyman Gbowee, as well as the former Irish President, Mary Robinson.

'This Prize is Very Important for All Congolese People'