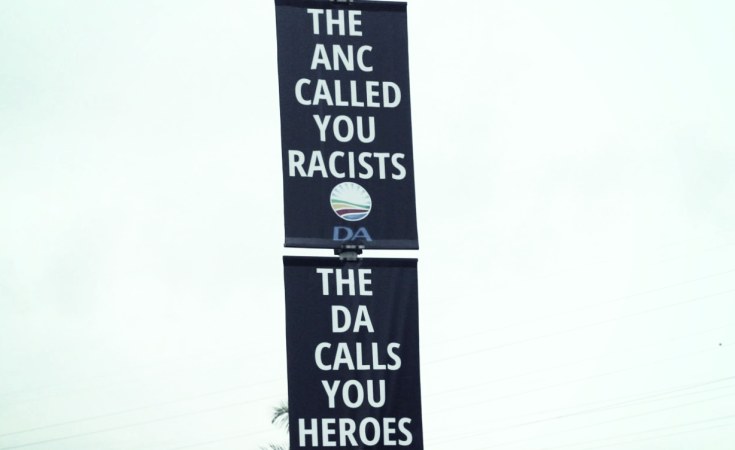 Supplied
The official opposition party in South Africa, the Democratic Alliance (DA) is being accused of using racial divisions in the KwaZulu-Natal town where deadly unrest took place in July 2021. The outcry about the posters led to the party removing them.
The Conversation Africa (Johannesburg)
analysis By Steven Friedman

Is "liberal" in South Africa another way of saying "right-wing"?

Liberalism's apparent representative in the country's party politics is the official opposition, the Democratic Alliance (DA). Its current leadership does not flaunt its liberalism, and most of its voters are not liberals. But it is affiliated to the Liberal International and the Africa Liberal Network, alliances of liberal parties. So, it identifies itself as liberal and liberal politicians around the world agree.

Other liberal parties may be less eager to identify with the DA after it distributed posters in eThekwini (Durban), KwaZulu-Natal, which were seen by just about everyone outside the party - and some within it - as at best racially insensitive, at worst bigoted and divisive.

They were erected in Phoenix, an area which houses mainly people of Indian descent, and was hit by violent clashes between Indian and black people in July. Phoenix residents who are blamed for the violence say they were protecting themselves from violent attack. Many black people insist they were racial vigilantes. The DA's response was to erect two posters. One read:

The ANC called you racists.

The DA calls you heroes.

Even at face value, the posters were inflammatory and insensitive. In an area crying out for a calming of racial tensions, they chose sides and inflamed them.

They become worse if we recognise that, in a racially divided society, what people read is filtered through stereotypes which are rarely expressed but are deeply felt. The posters reflected a (false) view common among racial minorities - that black people (the majority) are always responsible for violence; minorities are always defending themselves against them.

The DA's leader in KwaZulu-Natal, the province in which Phoenix is situated, has apologised for the posters, for which he was reportedly responsible, and said they would be removed. But he did this only after its Johannesburg mayoral candidate, Mpho Phalatse, urged that they be taken down and DA politicians in KwaZulu-Natal said he had not consulted them.

The DA's leader, John Steenhuisen, said he would not apologise for the posters; he endorsed their content while claiming, implausibly, that they were not racially biased.

While several DA politicians, and media commentators sympathetic to it, rejected the posters, its leader finds nothing wrong with them and it seems likely that his view is shared by others in the DA leadership.

The posters were not a bolt from the blue. They were consistent with messages the DA's current leadership has been sending out for some time.

Its federal chair and former leader, Helen Zille, has become notorious for Twitter outbursts which sound like those of Donald Trump. She has complained that colonialism's benefits are unappreciated and that there were fewer racial laws under apartheid than now. A DA MP claimed black members of parliament enjoyed singing because they were no good at thinking.

Nor is the DA the only supposedly liberal vehicle which echoes the global right-wing: the South African Institute of Race Relations, which recently filed court papers supporting the DA's position in a dispute with the electoral commission, has moved from a pillar of the liberal establishment to a loud vehicle for hard right positions, so much so that 80 people, including some former employees and members, signed an open letter protesting at its right-wing stances.

To many of liberalism's critics in South Africa, the fact that two of its core vehicles seem closer to the global right than the Liberal International is no surprise. Liberalism, they insist, may talk of freedom for all, but is another form of white supremacy. Reality is more complicated.

The Canadian political philosopher CB Macpherson argued that there were two liberalisms. The first he called "possessive individualism". It was an ideology of the property owner who believed that they enjoyed wealth and power not because they were privileged but because they were better than others. Liberals of this type were horrified at the thought that all adults should be allowed to vote because that would, they feared, give power to the ignorant poor.

The second he labelled "developmental liberalism" - it favoured votes and rights for all.

Both liberalisms have played a role in South Africa's history, although the divide between them has a racial flavour. The "possessive individualists" believe in white supremacy but think that "educated" black people - those who see the world as they do - could also be admitted to the circle of the privileged. Developmental liberals campaigned for votes for all and engaged in civil disobedience and, in some cases, armed resistance to minority rule.

The Liberal Party, which was active in the 1960s, housed both types. When it disbanded in the late 1960s to avoid implementing a new law which banned non-racial parties, its possessive individualists joined the Progressive Party, one of the DA's ancestors, which advocated votes only for black people who owned property and had formal qualifications.

So, the DA is a product of the liberalism that believes only some black people are equal to whites. So is the South African Institute of Race Relations, which was known during apartheid for high quality research but also for limiting its opposition to apartheid to convening discussions between whites and some black professionals.

The DA's rightward lurch is not its first - in 1999, the party fought an election using the slogan Fight Back. While it claimed it was rallying voters to oppose the governing African National Congress, it sounded very much like it was urging racial minorities to fight majority rule.

Later the DA tried, when Zille was leader, to shed its white, suburban baggage. But its white leadership found a liberalism that might allow for independent black leadership not to its taste. It has moved ever rightward since, despite the fact that this is likely to exclude it from government in most of the country forever: its current leaders clearly believe that their idea of whiteness is more important not only than liberalism but also than winning support.

But that does not mean the posters indict South African liberalism. Reactions to them suggest that the DA has become too right-wing even for many "possessive individual" liberals. It has arguably not been a liberal party for a while: even those who embrace the narrower form of liberalism may have begun to notice this. And, even in its liberal phase, it represented only one liberal strand - the other continues to influence South Africans, including many who are not liberals. It lacks a political vehicle but is found in the constitution and public debate.

So, the posters tell us much about the biases of the DA's current leadership. They say far less about liberalism and its future in South Africa.