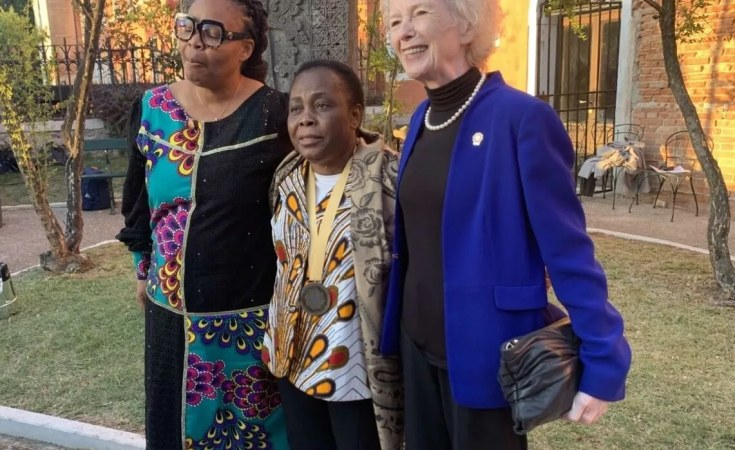 Human rights activist Julienne Lusenge of the Democratic Republic of Congo was recently proclaimed the winner of the 2021 Aurora Humanitarian Prize for her work with wartime victims of sexual violence. She was one of five humanitarian finalists who were up for the award, often referred to as the Nobel prize for humanitarian work.

The sixth Aurora Prize for Awakening Humanity was announced Saturday (October 9) in Italy at a ceremony on the Venetian island of San Lazzaro degli Armeni.

Lusenge was awarded the one-million-dollar prize for her tireless work with women and girls abused during wartime and for her efforts in helping bring the perpetrators of rape and sexual violence to justice.

She's the co-founder and director of the Congolese Women's Fund.

The other nominees included Gregoire Ahongbonon, who helps people in West Africa with mental illness, Ruby Alba Castano, a Colombian activist who protects the rights of peasants, Ashwaq Moharram, a Yemeni physician who provides life-saving support to victims of starvation and Paul Farmer, an American medical anthropologist and physician.

The ceremony began with music and a special prayer in the monastery of the island of San Lazarus by a sect of Armenian monks who have lived on the island since the early 18th century.

After speeches and a performance by Italian tenor Andrea Bocelli, the finalists were called on an outdoor stage with a view of the Venetian lagoon.

The name of the winner was announced in what turned out to be a very emotional moment, not only for Lusenge, but for many of those in attendance, which included two women winners of the Nobel peace prize: Iran's Shirin Ebadi and Liberia's Leyman Gbowee.

Lusenge was in disbelief and in tears when she heard she had been chosen.

"This prize is very important for all Congolese people, Congolese women and Congolese girls because now we will have enough money to support them," she expressed.

For many years, Lusenge said, she struggled to find funds to help these women. This prize will contribute a great deal in that regard, she said.

The Aurora prize for Awakening Humanity was established by three philanthropists of Armenian origin: Vartan Gregorian, Noubar Afeyan and Ruben Vardanyan in 2015 on the centennial of that country's genocide. They decided that for eight years -- the length of time the atrocities lasted in which one and a half million Armenians perished -- the prize would be awarded to extraordinary humanitarians for their work and impact.

Afeyan described it as "a gift from the Armenian community to the world." Their aim, he added, is to help people who are making a difference in the world in the same way as those who helped Armenians survive.

In addition to creating the annual award for those who have faced personal risk to enable others to survive, Afeyan is also the founder and CEO of Flagship Pioneering, a venture capital company focused on biotechnology. The company has "fostered the development of more than 100 scientific ventures" including Moderna, on which he serves as chairman. Afeyan last year was recognized as one of four U.S. immigrants leading the efforts to find a vaccine for COVID-19.