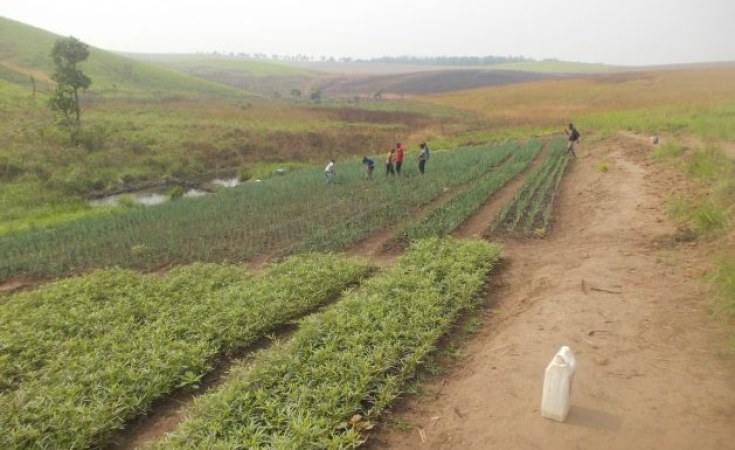 Monrovia — Weatta Gbelly has seen hardship in her 35 years but nothing prepared her for the Covid-19 pandemic. Ms. Gbelly has never had the virus, neither does she know anyone who has, but she has suffered just the same.

Ms. Gbelly is a mother of six. She and her husband used to farm to support themselves and the family. But her husband abandoned them last year. Lockdowns, restrictions on movement, and the economic calamity that has come with the global pandemic, has left her and the kids stranded.

"My husband left during the coronavirus and said he was going to hustle but since then, I cannot even hear from him much more to talk about him supporting his six children," says Ms. Gbelly using the term by which Liberians have come to know the virus. "The Corona brought my hands down and I cannot do anything for my children. At least before the virus, I was making cassava farm and I used to sell one bag for L$ 10,000, (equivalent to US$50) and from that money, I used to pay my children's school fees and feed us, but now, they are not in school."

Covid-19 restrictions have left rural women farmers across Liberia struggling. Many of these women's living conditions have changed from being producers to beggars. Others have taken odd jobs, like washing clothes for pay or clearing other people's yards. Many, like Ms. Gbelly, have been forced to take their children from school to support the family.

"My 20-year-old son, who stopped school in the 11th grade, is riding motor bike for someone to support us, and it is through that money, we can buy food to eat," says Ms. Gbelly.

More than 75% of farmers' production was affected during the pandemic according to Julius M. Bass, National Coordinator of the Farmers Union Network of Liberia. Women have borne the brunt of it, making up 62% of those whose production has suffered, while men made up 38%.

"During the first wave of the COVID 19 pandemic in Liberia, farmers were affected in their farming activities throughout the 15 counties of Liberia," said Mr. Bass. "They could not fully practice their normal group farming activities, neither did they have access to clean seeds and other farming inputs to grow food. Farmers coming from the counties with food to the central market in Monrovia were unduly delayed at check points erected by state security. Often the delays meant food was damaged and could not reach the market. Farmers in the production of vegetables, which is easily perishable, were more affected."

Ms. Gbelly uses her cutlass to clear the narrow pathway overtaken by bush while taking reporters to see her farm. Sharp thorns stick to the legs. When we reach the farm thick grass and other plants have grown so high they have covered the entire cassava farm. It is so overgrown one cannot easily recognize the cassava plants or know if there was ever a farm there.

Women farmers often worked in groups to allow them to work faster and clear bigger portions. They work on one woman's farm before moving to the next. Because Covid restrictions prohibited close contact, they have been unable to do that.

"Women farmers are supposed to depend on their farming for their livelihoods but COVID 19 has forced these women to stay at home and take care of their children," says Radiatu H. S. Camplaye of the National Women Resource Platform. "Birds would eat all the rice from their farms, or those who have cassava and eddoes farms, would be overtaken by grass."

Ms. Camplaye says very few women have escaped the pain of the pandemic. "I would say 95 percent of women, including farmers, have been affected negatively by the COVID 19 pandemic."

The Platform works with international donors to help many rural women with seeds to grow more food and microcredit loans to do business, but Ms. Camplaye says her organization has not yet received any extra support from donors or government to cope with Covid.

Dabbah Jackson, 44, is also a single mother of six. She made cassava and rice farms, but could not harvest them. The rice was eaten by groundhogs. She normally does farming along with her friends.

"Life isn't fine. Don't see me looking like this. I am struggling with my children," says Ms. Jackson. Like Ms. Gbelly, the father of Jacksons' children also abandoned his family. "My children are out of school because I don't have the means to send them to school. My friend loaned me some money to do the farms, but all of that went in vain because the farms was not growing before the pandemic struck."

Ms. Camplaye says pandemic lockdowns have put great strain on relationships, especially where men had been maintaining more than one relationship.

"The reason why these men are leaving their homes is because many of the men who are usually at work or out, had to stay home during the COVID 19, when everybody stayed home and this brought so much tension between husbands and wives," Ms. Camplaye says. "Some of the men who are engaged in extramarital affairs were being monitored by their wives. They got fed up with wives asking questions about their whereabouts and decided to abandon their families."

Husbands abandoning wives is an age-old problem in Liberia, according to Mr. Bass but the pandemic has exacerbated it.

"Many of the men would leave their women and go far away to work in mining claims around the country, and once these men see greener pastures, they usually find other women and forget about their wives and children. And during the pandemic, it became worse," says Mr. Bass.

As Ms. Gbelly pours rain water from a tub into a jerry can to prepare the small food the family has to eat, she says she sometimes goes into the bush to get cassava leaves to sell in order to help her son. But she pleads for assistance and expects government to deliver it.

"It is not easy to live without a husband," says Ms. Gbelly. "I am only depending on my big son to live. So I want the government to help me do business to send my children to school."

This story is a collaboration with New Narratives as part of its Land Rights and Climate Change Reporting Project. Funding was provided by the American Jewish World Service. The funder has no say in the story's content.