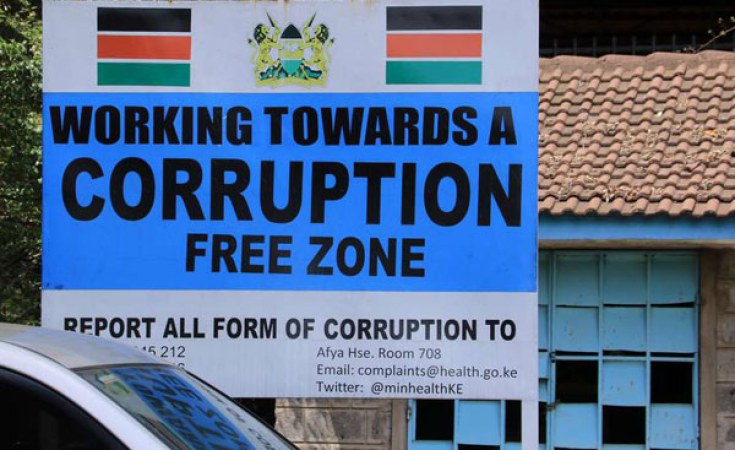 Jeff Angote/Daily Nation
A banner outside the Ministry of Health warning against corruption (file photo).
The Nation (Nairobi)
By Joseph Wangui

The State appears to be making progress in the fight against corruption and economic crimes such as abuse of public office, theft and mismanagement of public funds.

Prosecutors have recently secured convictions of high-profile former and current government officials, as well as business people and professionals involved in facilitating corruption.

Among the top government officials convicted are former Sports Cabinet Secretary Hassan Wario, Stephen Arap Soi, a retired police boss who was an official in the same ministry, and Sirisia MP John Waluke.

The Director of Public Prosecutions also secured a victory after the High Court made a precedent-setting ruling that barred public officials charged with graft from accessing their offices pending their trial.

The ruling has applied against governors and Cabinet secretaries facing corruption cases.

The latest to be sent to jail is Mr Ngamau, who was a fortnight ago fined Sh900 million for stealing money from the Youth Enterprise Development Fund.

The retired police boss was found guilty of six counts - three on abuse of office and three on wilful failure to comply with rules on the management of public funds.

Chief Magistrate Elizabeth Juma noted that taxpayers lost money as result of the acts of omission or commission by both Soi and Wario.

Wario was fined Sh3.6 million for three offences related to abuse of office - allowing three Ministry of Sports officials to travel to Rio de Janeiro, Brazil, in July 2016 for the Olympic games.

The court said their travel was improper as Wario had tinkered with the list of the Kenyan delegation so as to include them, leading to a loss of public funds.

Koech faced three counts of illegally acquiring public property. He was charged that on August 17, 2006 in Nairobi he fraudulently acquired Sh800,000 belonging to Kemri.

The alternative counts were that he used his office to corruptly acquire money held in the bank account of Vector Biological and Control Research.

In June last year, Waluke, the Sirisia MP, and Wakhungu, his business associate, were sentenced to 67 and 69 years, respectively.

Waluke was also given the option of paying a fine of Sh727 million and Wakhungu Sh707 million.

They were found guilty of fraud involving Sh297 million in shady maize dealings with the National Cereals and Produce Board.

In February this year, Mberia, the Karen MCA, was sentenced to three years in prison or pay a fine of Sh700,000 for soliciting and receiving a bribe of Sh1.7 million from a private school.

The Anti-Corruption Court also barred him from holding public office for failing the integrity test as a result of the graft conviction.

But his co-accused, MCAs Jared Okode (Mathare) and Abraham Mwangi (Woodley/Kenyatta), were acquitted because prosecutors failed to provide adequate evidence.

In March this year, Aoko Ondiek, the widow of former Ugenya MP Archbishop Steven Ondiek, was convicted and sentenced to two and a half years in prison without the option of a fine for stealing Sh1.5 million from taxpayers.

Aoko Ondiek, who was acting director of secondary and tertiary education, was jailed after the Anti-Corruption Court found that she pocketed Sh1.5 million that was meant for a needs assessment workshop for school principals in Mombasa. The workshop was held at Coast Girls High School between June 13 and 29, 2009.

The court found her guilty of false accounting and said she tried to pass the blame to her junior and co-accused Christine Wegesa Chacha, but her attempts flopped because the signatures on the documents did not match.

Wegesa Chacha was ordered to pay a fine of Sh1 million or serve one year in jail. The court also found that Aoko Ondiek was a repeat graft offender.

It was the second time Aoko Ondiek was convicted and sentenced for stealing public funds, forgery and false accounting.

The first conviction was in 2011, when she was sentenced to six years in jail after being found guilty of three charges involving false accounting. She filed false receipts at Jogoo House in Nairobi in order to steal a total of Sh1.2 million in different amounts.

After she appealed, the sentence was reduced to two and half years by the High Court in March 2017 with the option of paying a Sh600,000 fine.

Last year in May, former Kasarani MP John Chege was convicted and sentenced to one year in jail or pay a fine of Sh1.3 million after being found guilty of receiving a Sh100,000 bribe from a contractor.

The bribe was given by Abdirahman Mohamed Abdullahi as an inducement to facilitate the payment of Sh3.3 million for a completed tuition block at Baba Dogo Secondary School.

Kinyua, the former Kenya Re finance director, was also sentenced to one year in prison for fraud related to abuse of office and the sale of the corporation's property.

He was convicted of fraud after tricking taxpayers into buying a house in Embakasi's Villa Franca Estate.