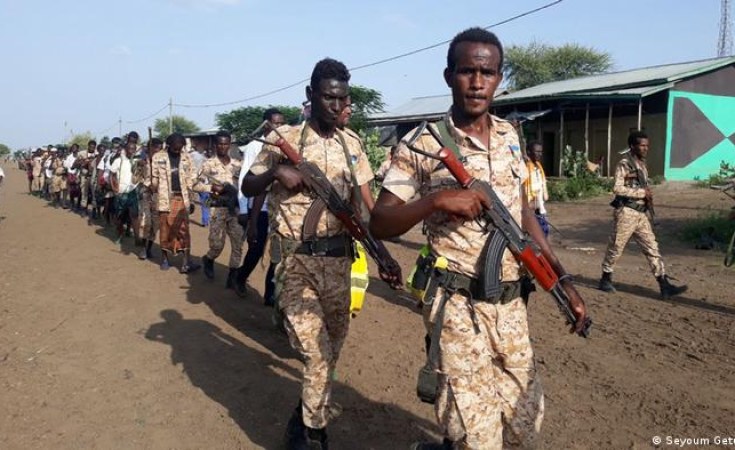 Military attacks are once again punctuating the ongoing crisis in Ethiopia. But government officials have not acknowledged a fresh offensive, which Tigray forces say began last week.

An air-and-ground offensive in Ethiopia's northern Tigray region is intensifying, according to Tigrayan forces, with the Ethiopian government pressing a fresh attack .

The Tigray People's Liberation Front (TPLF) says the fighting began with airstrikes launched by the federal government last week. However, the office of Prime Minister Abiy Ahmed has not acknowledged the offensive. The office released a statement stating that the government had "a responsibility to protect its citizens in all parts of the country from any acts of terrorism."

Government officials have not responded to DW's requests for further comment.

The offensive reportedly began just days after Abiy was sworn in for a new five-year term. He is facing growing pressure from the international community to swiftly resolve the Tigray crisis, with the fighting raising fears that the conflict could further destabilize the Horn of Africa nation and plunge the region deeper into famine.

Fighting on all fronts

With the region closed to journalists and most phone connections down, attempts to independently verify the situation and confirm casualty numbers have proved difficult.

"The government forces continue their assault to retake the occupied territories," he told DW. "It has brought a lot of force to the fight. ... At the moment, the offense has started on all fronts, and we will give more details soon."

According to Reuters, TPLF spokesperson Getachew Reda denied claims that the rebels had used heavy weapons against civilians but did confirm fresh hostilities in the Afar region.

"Enemy forces are crumbling and in disarray in parts of Afar," he said.

Seyoum Getu / Deutsche Welle
Dozen of armed people on a tank in an unidentified area of Ethiopia.

The TPLF pushed into the neighboring Afar and Amhara regions in July, which it said was intended to stop government forces from regrouping and break what it calls a humanitarian siege of Tigray.

Last month, the government said it had "suffered great losses" and was "routed" from Afar, while the TPLF said it had withdrawn troops from the area.

Afar currently hosts the only land route through which humanitarian aid can enter Tigray.

"We do not target civilians, and the alleged artillery attack is yet another [fictitious] accusation to tarnish our forces' reputation," Reda said. He added that the TPLF's current military objective is to "push back the offensive and go as far as it takes to break the siege on the people of Tigray."

He said the number of casualties was "staggering."

Humanitarian sources have also reported signs of a government offensive that could potentially mark a new phase of the almost-yearlong Tigray War.

Gahas Mohammed, the chairperson of the Afar Human Rights Organization, told DW how one of the latest attacks unfolded.

"[It] happened on two villages," Mohammed said. "The first was on Lewa, the district is located at the border area between Woldeya in the Amhara region and Harra in Afar. In the last two days six people were killed and more than 20 injured."

"We have said that the war is going on in the Afar region," Mohammed said. "As per their own ratified constitution, crossing a regional border means violating the constitution. But they are committing the offense. They do not care about civilians."

Observers are closely watching Abiy's new Cabinet for signs of a different approach to the conflict, as the government faces growing international condemnation for its handling of the war and the recent expulsion of seven senior UN officials.

The prime minister's office, which blames theTPLF for starting the war, has said certain conciliatory measures, such as declassifying the TPLF as a terrorist group, can only happen after the new government has formed.

Fighting broke out in November 2020 in the Tigray region after Abiy sent troops to topple the TPLF, which dominated national politics before he took office in 2018.

Government forces swiftly drove the TPLF from Tigray's cities and towns, but the rebels retook most of the region, including its capital, Mekele, by late June.

The war has soured relations between Ethiopia and Western powers, including the United States, long a critical ally.

A US State Department spokesperson told AFP this week that Washington was "considering the full range of tools at our disposal to address the worsening crisis in northern Ethiopia."

These measures include: "Targeted economic sanctions to hold accountable those responsible for, or complicit in, prolonging the conflict, obstructing humanitarian access or preventing a ceasefire, while mitigating unintended effects on the people of Ethiopia and the wider region."

US global trade representative Katherine Tai on Thursday said Washington would "soon" make a decision on Ethiopia's status under the African Growth and Opportunty Act (AGOA) which currently gives it duty-free access to the US.

"Reports coming back to us through official channels and civil society are not encouraging," she said. "What is happening in Ethiopia is a humanitarian crisis."

On Tuesday the US, the EU, France, Germany and the UK called on all parties "to immediately end abuses and enter into negotiations toward a ceasefire."

Alemnew Mekonnen and Mantegaftot Sileshi contributed to this report.