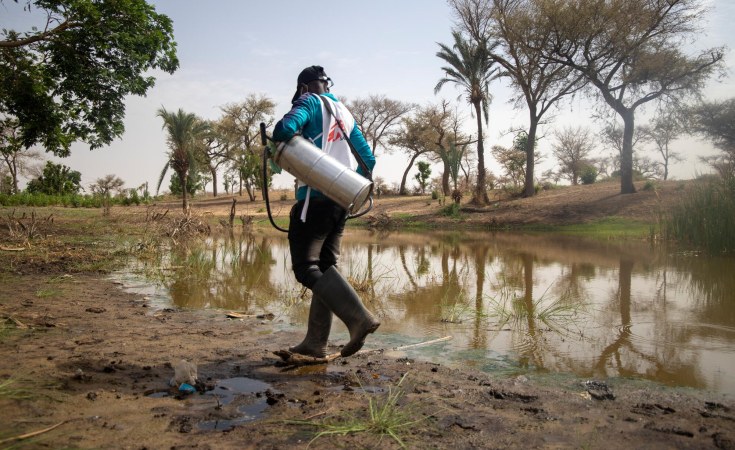 MARIO FAWAZ/MSF
MSF teams treating the different water points in the village of Ara in the commune of Bandé in the department of Magaria in south of Niger (file photo).
Voice of America (Washington, DC)
By Timothy Obiezu

Abuja — The World Health Organization's endorsement of the world's first malaria vaccine marks a major advance against the mosquito-borne illness, which kills some 265,000 children in Africa annually.

Bitrus Yusuf pours syrup into a measuring cup to give to his three-year-old daughter and grandson who are sick with malaria.

He said the mosquito-borne parasite that causes the illness is all too common at this Abuja camp for internally displaced people where they live.

"We went to bed, all was well, everybody was well," Yusuf said. "But toward midnight I heard him shivering. As I touched his body (it was) very hot, so I woke him up."

The World Health Organization said some 94% of malaria cases and deaths worldwide occur in Africa, and that Nigeria accounts for a quarter of the fatalities. The U.N. agency said children under the age of five and pregnant women are the most affected.

Last week, the global health body announced its approval for the rollout of the world's first malaria vaccine, Mosquirix. The vaccine, made by the pharmaceutical company GlaxoSmithKline, has been in development for more than three decades.

The WHO said Mosquirix could potentially change the course of public health history.

Walter Kazadi Mulombo is the WHO representative in Nigeria.

"You know before the vaccine could be introduced in the country, it has to be cleared by NAFDAC for the case of Nigeria and there are steps to be taken for the country to approve the vaccine so that introduction can start," Mulombo said.

NAFDAC refers to the National Agency for Food and Drug Administration and Control in Nigeria.

During a large-scale pilot program that began in 2019, some 2.3 million doses of the vaccine were administered to children in Malawi, Kenya and Ghana.

The WHO said when rolled out, the vaccine could help prevent up to four in 10 cases of malaria.

But Mulombo warns there could be supply problems at first.

"There may be some supply issues so it may not be in the quantity we require to reach all those that we need to reach," Mulombo said. "But we understand that GSK, the manufacturer, is working already with some African countries to decentralize production."

Abuja Primary Health Board official, Ndaeyo Iwot, said the new vaccine does not eliminate the need for taking other malaria preventive measures.

"If you don't combine it with sleeping under insecticide treated nets and also taking care of your environment, where the vectors can breed, then you're more likely to continue to have the scourge of malaria in this country," Iwot said.

GlaxoSmithKline said it will manufacture about 15 million doses of the vaccine yearly, but experts say at least 50 to 100 million doses are needed every year in areas with moderate to high transmission.

In the meantime, Nigerian parents like Yusuf said they are hoping to get their children vaccinated as soon as possible.