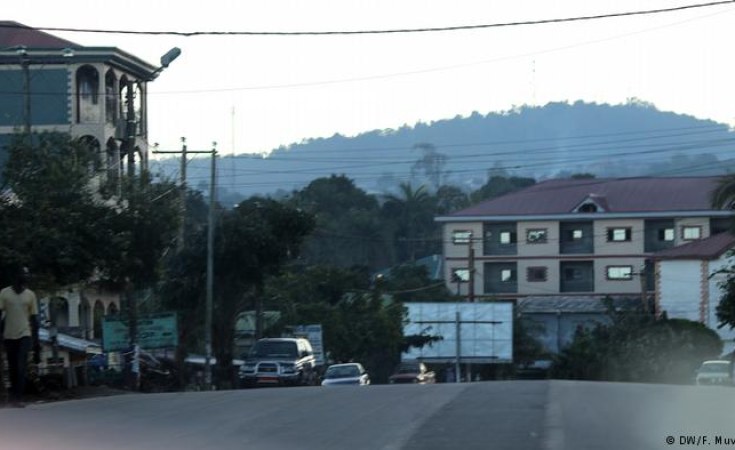 Authorities in English-speaking western Cameroon have appealed for calm after a policeman who killed a four-year-old schoolgirl was lynched by an angry mob. This comes just weeks after the new school year began in the troubled region, with students returning in large numbers for the first time in four years.

The incident took place on Thursday in Buea, in a region where anglophone separatists and government forces in the French-majority nation have been locked in a bitter conflict.

Blaise Chamango, head of a local campaign group called Human Is Right, said a woman driving children to school was ordered by police to stop at a checkpoint.

"The driver didn't obey. A gendarme opened fire and a schoolgirl was fatally wounded," she said.

People responded by lynching the gendarme. Then around 500 people came out and marched with the body of the girl to the governor's office.

The governor of south-west region, Bernard Okalia Bilai, tried to calm people down by promising to punish those responsible, Chamango said.

The gendarmes are usually French speaking and sent from the capital, Yaounde. Their presence in the south-west region has generated widespread distrust.

Over the past four years, separatists had been urging students to stay home to defy the central francophone government.

However, a massive campaign this autumn to get children back behind desks was going smoothly until this incident.

Overall, in Cameroon's crisis-hit south-west, figures compiled by the Ministry for Education show that 85,800 students enrolled in school this year, an increase of nearly 15,000 from the previous year.

Although the crisis continues, some parents have started sending their children back to school.

To keep schools up and running, Hanna Entonde Mbua, regional delegate of secondary education for the south-west region, says education officials have put a number of measures in place to ensure the security of students she told Africa Calling podcast's Batata Boris Karloff.

But there have been problems, including an incident nearly a year ago when attackers with police uniforms stormed a school in Kumba, killing seven children with machetes and guns, and injuring another 14. No one has taken responsibility for the killing.

The government responded with force.

Threats have also been made against teachers as well as students. The school boycott, like the crisis itself, was supposed to be a brief protest, according to Tilarius Atiah, a political analyst at the University of Buea.

"The anglophone crisis that was supposed to be short-term became long term. Children were left out of school, they were kidnapped, maimed teachers were killed," says Atiah.

"Even now, teachers are not safe because there are mixed signals from separatists some of whom who say schools should resume, while at the the same time some of these separatists are occupying schools. It's a confusing war."

Although many students are going back to school, some teachers are reluctant to do the same. They feel they are a target, forcing some to abandon their duties. In Muyuka, one of the towns hardest hit by the conflict, one teacher decided to quit.

"We were waiting to see if things would improve, but it's just been the same, and we are just sitting at home doing nothing because we fear for our lives," she says.

Those who have returned have mobilised local security as a way of coping.

"It has not been easy due to the political situation...but we brave the odds. There are days you have to camouflage and wear something so that nobody can recognize you...at the end you are proud of what you do," she says.

She tells Africa Calling that what motivates her to work and teach students is that she knows life is hard without an education.

"I am a mother of four, and I have taken care of kids who are not my own, including orphans. It is not easy to see them stay back (at school). If you're not educated you'll have many challenges ahead of you," she adds.

He added that some towns in the anglophone region, such as Nkambe, Limbe, Buea and Mamfe have been able to protect the children to permit them to return to their studies, and in some cases, the government has provided security.

Other government initiatives include renovating some schools that became separatist camps, or were destroyed.

Ultimately, the separatists are seeing that children need to go to school, which is a big difference from 2017.

"Some of the separatists are also also talking about the need to go back to school, like Erick Tataw, one of the leaders who had previously urged the maiming of school children.

He says now that there is a need for them to change strategy and allow children to go back to school.