Nigeria: Unease As Nigeria Marks One Year After #EndSARS Protests 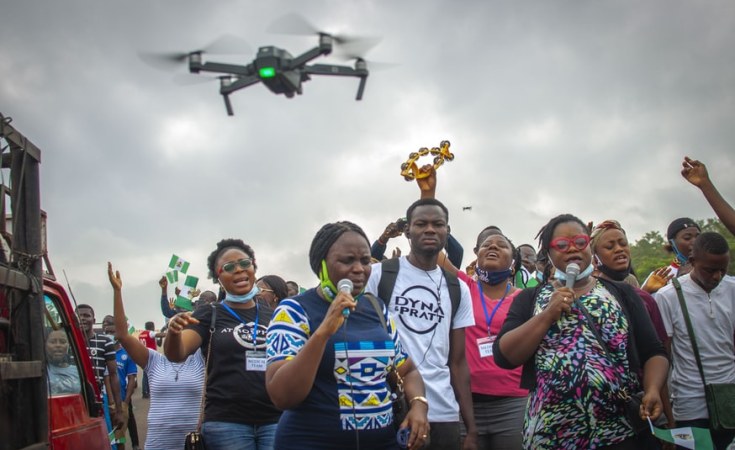 One year after #EndSARS protests rocked Nigeria, police have warned against a repeat to mark the anniversary. The largest protest in Nigeria's history ended after the army reportedly killed at least 12 demonstrators.

Empty burnt-down buildings in Nigeria's commercial capital Lagos are all that remains of the #EndSARS movement -- a largely youth-driven protest movement -- that shook Nigeria's ruling class to its core in October 2020. As a precaution to avoid a repeat, Nigerian police issued a warning to thwart any potential fresh protests.

Tens of thousands of people took to the streets demanding that President Muhammadu Buhari carry out police reforms.

"I think, in terms of stopping police brutality, that one was settled because it is not like before," Victor Joseph, a former secondary student in Lagos, told DW. "What is left for the government is creating job opportunities for the youth." He said the government should prioritize people who have just finished their studies.

"It was expected that the #EndSARS protests would propel the government to see the need to urgently initiate a comprehensive police reform program," Okechukwu Nwanguma, the executive director of the Rule of Law and Accountability Advocacy Centre (RULAAC), told DW. "The reforms were meant to address the challenges and gaps that allowed the egregious misconducts that triggered the #EndSARS protests."

The quest for police reforms

Barely one month before the protests started, Buhari had signed into law the Police Act 2020, which provides a framework to kick-start genuine and far-reaching police reforms.

According to Okechukwu, those changes addressed issues such as the compromised police recruitment process and poor training, including dilapidated training institutions. Nigeria's police also face inadequate funding and poor welfare conditions, making the police workforce prone to corruption and violence.

"The new Nigeria Police Act has elaborate provisions for due process safeguards and how police officers should exercise their powers," Okechukwu sai.

However, despite the new law, the federal government resorted to suppressing peaceful protests before deploying the army. On the night of October 20, 2020, soldiers opened fire on the assembly of unarmed protesters, killing at least a dozen people, Amnesty International reported.

Okechukwu said not much had changed over the past year. "Police abuses remain widespread, with officers engaging in the same patterns of abuse that sparked #EndSARS," he says.

For nearly two weeks leading up to October 20, #EndSARS demonstrators had pitched camp at the Lekki toll gate. The protesters prevented traffic from accessing the route. Authorities accused some "criminals" of taking advantage of the peaceful demonstrations.

A curfew was also put in place ahead of the October 20 protests. At the time, Lagos State Governor Babajide Sanwo-Olu issued a statement urging "peaceful protesters and residents" to obey the curfew and stay home.

Later that day, security forces opened fire on the thousands of peaceful protesters at the toll gate without warning. Governor Sanwo-Olu said the forces were beyond his control, pointing out that it was Buhari who deployed the military.

He said the government had moved from denials to partial admission alongside attempts to cover up the truth regarding what happened at the Lekki toll gate. One year after the massacre, the toll plaza is yet to resume operations fully.

"There is no accountability yet for the perpetrators of police abuse," he said. "Impunity is still rife, and the rule of law is in retreat."

There has been controversy over the actual number of persons killed by the military at the Lekki toll gate. This has played out over the past year at the Lagos State Judicial Panel of Inquiry, where the army, police, Lagos State government representatives, members of the #EndSARS movement, and the chief pathologist at the Lagos State University Teaching Hospital (LUTH) all gave testimonies and evidence.

For young people such as Idowu Babajide -- one of the leaders of last year's #EndSARS protests -- uncertainty about the future is something that hasn't changed in the wake of the demonstrations.

"The problem of the youth in Nigeria is mostly unemployment," he said. "They don't have jobs. So, when the youth don't have work, you don't expect them to be law-abiding."

Babajide said the government urgently needed to put job creation and education at the top of the agenda "because. when the youths are educated, they will be informed. They will know the right thing to do."

According to data from the National Bureau of Statistics, in 2020 nearly 14 million Nigerian young people were jobless.

SARS impunity still in the spotlight

In 2010, an editorial by Sahara Reporters exposed how, in just 18 months, SARS and other police units had raked in 9.35 billion naira (€51 million/$60 million) from mounting roadblocks and extorting residents.

On October 4, 2020, a video showing SARS officers dragging two men from a hotel and shooting one of them went viral. Ultimately, it was this clip which triggered the eruption of #EndSARS protests on social media and on the streets, calling for the disbandment of the unit.

Okechukwu said Nigerians were now waiting for the government to implement the recommendations of the various state judicial panels of inquiry so that the perpetrators can finally be held to account.

"That's one way the state will send a clear message that it will not condone human rights violations," Okechukwu said. "It is one way to stamp out impunity for police abuses."