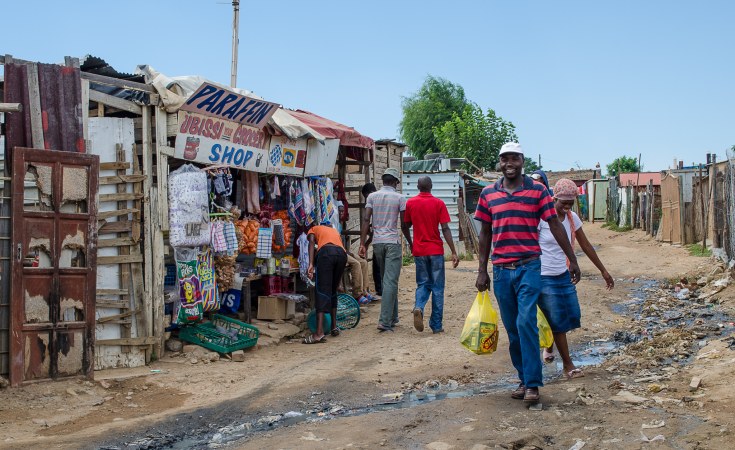 Days before his death in July, the African National Congress (ANC) mayor of Johannesburg, Geoff Makhubo, wrote an article responding to critics of the city's managers. The critics say Johannesburg is in decline and falling apart. He emphasised the legacies of apartheid in the continuing inequality in South Africa's "city of gold".

His short essay envisioned a future Johannesburg as

a site where one tax base for one city will be used to ensure that people ... know they have as good a chance of success regardless of whether they are from Diepsloot or nearby Fourways.

It would be absurd to argue against the view that apartheid bequeathed South Africa a highly unequal society. But to identify the historical roots of injustice is quite different to identifying how it is reproduced or reduced.

Makhubo's reference to Diepsloot and Fourways, respectively among the poorest and richest areas in Johannesburg's north, was curious. These neighbourhoods have grown primarily in the post-apartheid era.

What Makhubo did not mention is that the aspiration for "one tax base for one city" is long-standing. It's been held by successive ANC governments - and social movements - in the city since the early 1990s, as talks to end apartheid got off the ground.

Weapons of the strong

In the early 1990s, South Africa was considered ripe for transformative change. This meant undoing the racialised structure of wealth and the highly divided geography that rationed access to the benefits of city life.

The ANC government entered power at all levels with extremely high degrees of political legitimacy. It was verboten to attack the basic tenets of social transformation it placed on the political agenda.

At the national level, there were critical successes in building the kinds of state capacity normally seen as fundamental to reducing inequality.

Tax collection has largely tracked or even beaten averages of countries in the Organisation for Economic Cooperation and Development. A third of South Africans receive one of three major social grants.

But the structure of apartheid-era cities has largely been reproduced. It is this structure that, in many ways, was the raison d'être of the apartheid state -- to serve the white urban minority.

In my newly-published research conducted between 2015 and 2018, I examined why Johannesburg, South Africa's largest and richest city, has reproduced spatial inequalities since 1994. In particular the distribution of housing, sanitation and transport remains unequal.

I tried to answer this question through 115 semi-structured interviews with local politicians, bureaucrats, activists and private developers in the city.

I augmented the data with hundreds of documents collected through archival research in government and NGO publications, the South African History Archive and newspaper articles.

Strikingly, these hidden strategies top the political agenda ahead of the November municipal elections. They speak precisely to the unfinished work of realising "one city with one tax base".

Mpho Phalatse, the Johannesburg mayoral candidate of the official opposition, the Democratic Alliance (DA), has emphasised her desire to expand City Improvement Districts. Through these, individual neighbourhoods contribute to funding urban management services that are only for their specific areas.

This echoes the first of the strategies that undermined municipal state capacity. I categorise this strategy as "ring-fencing" - area-based hoarding of taxes for local infrastructure improvement.

By "ring-fencing", wealthy neighbourhood associations undercut attempts at municipal unification. Revenues are taken out of a general municipal funding stream, and put towards investments that reproduce disparities in the provision of public goods.

The founder of one of the first City Improvement Districts in the suburb of Illovo in the mid-1990s described the motivation for establishing them:

We definitely weren't going to give our contributions to the city, because there would be no guarantee that it would be spent in the area (p. 200).

This strategy became a key means by which wealthier suburbs could ensure a much higher standard of urban management than that in poorer areas. The tax payments were held by the interim municipal "sub-structures" in the first years after apartheid.

Another key strategy I identified was "venue-shopping". This is a process by which property developers sought construction approvals from the Gauteng provincial government - under which Johannesburg falls - to undercut the "urban development boundary" that the City of Johannesburg was attempting to enforce.

The relatively austere capital expenditures of the city throughout the 2000s, and the lack of institutional capacity to enforce both land use regulations and inter-agency coordination, meant that private developers were still able to shape the spatial trajectory of the city.

The terms of this year's mayoral debate in Johannesburg therefore expose battles that were once subterranean.

The ANC imagines that a redistributive agenda for the city can be built on references to the apartheid past, and top-down delivery through the state. The DA de-emphasises redistribution altogether, adopting strategies for fragmenting urban management. This will only benefit the largely white wealthy homeowners and property developers.

What is missing is a role for housing movements to challenge the growing power of developers and wealthy property owners. These were once so militant they helped bring down apartheid.

These movements have been demobilised and cast aside under the ANC. Government is supposed to deliver, and to do so alone. But, without a social movement base, municipal government has struggled to mobilise the bureaucratic power necessary to deliver housing, sanitation, and spatial transformation.

This is because city authorities don't have political allies who can counter the often hidden power of homeowners and property developers. As a result, this group's "weapons of the strong" undercut local government authority.

As I found in my research, housing movements are extremely fragmented and localised. To move beyond the highly unequal urban stalemate will require a long-term political project to reconnect movements to the local state in a way that has not happened since the dawn of democracy in 1994.