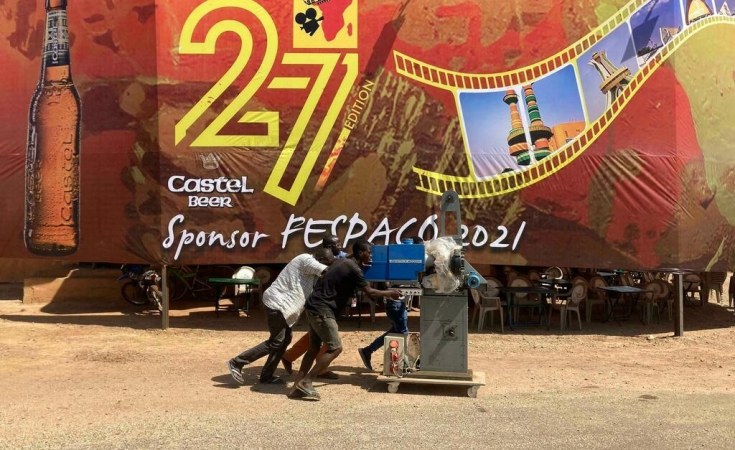 Africa's premier film festival, FESPACO, opened in the capital Ouagadougou on Saturday with a colourful high-energy ceremony and a message: Burkina Faso is back!

The biannual cinema event, postponed for eight months due to Covid-19, returned in style for its 27th edition, with an all-singing, all-dancing, star-studded opening ceremony.

Recording artist Amzy struck the opening note with "Bienvenue à Ouaga" (Welcome to Ouaga). People bicycled behind him, recreating life in the Burkinabé capital in miniature.

A modern dance troupe showcased the best of Burkinabé choreography while West African singers sung or spoke, paying tribute to revolutionary leader Thomas Sankara and to Burkina Faso itself.

"It's Africa in all its diversity and beauty, [a continent] that sings and dances, but is politically-aware," Mauritanian filmmaker Abderrahmane Sissako, head of the jury, told RFI after the event. "Young politicians are speaking not with violence, but with force," he said.

And the opening was just that - a potent look at a country which has suffered from political instability and security threats, but is determined to show attendees what it does best.

One of the most colorful numbers came from Burkinabé singer Hawa Boussim who performed astride a white stallion wearing an elaborate orange gown and turban made from a traditional hand-made striped cloth known as Faso Danfani. The stallion is a Burkinabé emblem and the festival's top award is the Stallion of Yennenga prize.

Photos of pan-African former president and revolutionary leader Thomas Sankara loomed large in the background of the ceremony.

Assassinated 34 years ago, the charismatic and often-quoted leader remains in the hearts of many Burkinabés.

The powerful song "Thomas Sankara" - performed by Burkinabé rapper Smockey and Senegal's Awadi - brought cheers and fist-pumping from the crowds.

The different numbers were punctuated by speeches. Ouagadougou Mayor Armand Roland Pierre Beouindé told attendees from around the world they should "make this city feel like their home".

But he also urged people to "keep safe and comply with security orders," in reference both to the Covid measures in place and the fact Burkina Faso has been dealing with an armed jihadist insurgency for the past six years and the country remains on alert.

Burkina Faso President Roch Marc Kaboré gave the opening clap of the festival, telling the press that holding the festival in the face of health and security threats showed the "resilience of the Burkinabe people".

Over 200 films made by Africans and mainly produced in Africa have been selected for the week-long event.

Senegal, the country of honour this year, has 19 films on show, 14 in competition. The country was given a warm welcome at the opening ceremony when the national anthem was played, accompanied by the West African stringed kora.

FESPACO is also a business opportunity, a chance to connect international buyers and outlets with African content.

Chatting to local film enthusiasts, some think Burkina Faso is lagging behind its neighbours.

"FESPACO is a good thing for Ouagadougou, but I also think Burkinabé cinema has a way to go," Laurence Ali Ouedrago, a Ouaga resident told RFI. "You can't neglect the cinema industry, look at other countries, movies bring jobs, people pay taxes."

Yarro Boubakar, also Burkinabé, struck an upbeat note: "FESPACO is a force in Africa, it's a real mix of cultures," he said.

The FESPACO festival runs until 23 October.