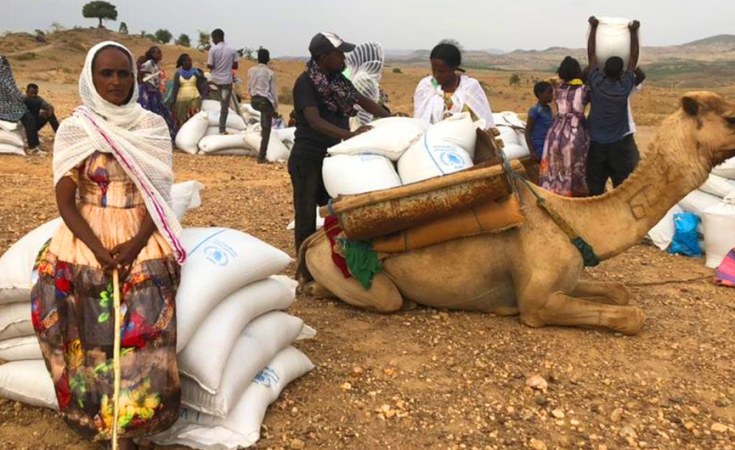 WFP/Rein Skullerud
The World Food Programme (WFP) at work in the Tigray region of Ethiopia.
The Nation (Nairobi)
By Tesfa-Alem Tekle

A rebel group from Ethiopia's northern Tigray region on Saturday claimed to have made major advances in a week of renewed heavy fighting that began on Sunday last week.

Getachew Reda, a senior member of the TPLF, claimed their forces had totally destroyed the whole of Eastern command of the National Defence Forces, including more divisions that were deployed as reinforcements.

Getachew, a former communications minister, vowed that the Tigrayan forces will end Abiy's "final and decisive" offensive in a matter of "days or couple of weeks".

"Abiy Ahmed's dream to capture Tigray and wipe out its people is all but over," he said.

"His forces are crumbling like a house of cards. It remains to be seen if he can lie his way out of what we believe is a total defeat and miraculously hold onto his seat," Getachew added.

TPLF on Monday last week said that the Ethiopian army, alongside allied Amhara special forces, had launched a ground and aerial offensive in a bid to re-invade Tigray and called on the international community to condemn the attack.

"On the morning of October 11, the Ethiopian military with the support of Amhara special forces launched coordinated offensives on all fronts," TPLF said, adding that the large-scale offensive is backed by heavy weapons, tanks, rockets, drones and fighter jets.

It said that a government offensive launched a few days earlier was in "full swing".

Addis Ababa has rejected TPLF's allegations after it remanded silent after about a week.

In a statement issued Thursday night, the Ethiopian Ministry of Defence blamed the Tigrayan rebel forces for the intensifying war.

The statement added that the TPLF has since Monday last week launched a large scale offensives on all fronts, declaring that "it would shorten the war and enter Addis Ababa in two weeks, thereby to change the political, military and diplomatic situation" of the country.

Conflict erupted in Tigray last November when PM Abiy ordered a military operation against Tigray in a bid to depose TPLF leaders who had been ruling the region and the country for nearly 30 years.

The nearly one-year long conflict between the Ethiopian rivals has claimed the lives of tens of thousands of people and left about 5.2 million people in need of emergency food assistance.

According to the United Nations, hundreds of thousands of people are currently in a famine-like condition.

Blockage on fuel, medical supplies and closure of banking services coupled with electricity and communication blackout has worsened the humanitarian crisis in the Tigray region.

US President Joe Biden in a meeting with his Kenyan counterpart Uhuru Kenyatta on Friday reiterated the need for a peaceful resolution to the bloody conflict in Ethiopia.

A few days ago, TPLF said it was ready to sit down on a table with Abiy's government to find a peaceful way out of the civil war.

But the group accused Addis Ababa of repeatedly rejecting calls for mediation.

Ethiopia has repeatedly ruled out negotiations with TPLF, a group it terms as terrorist