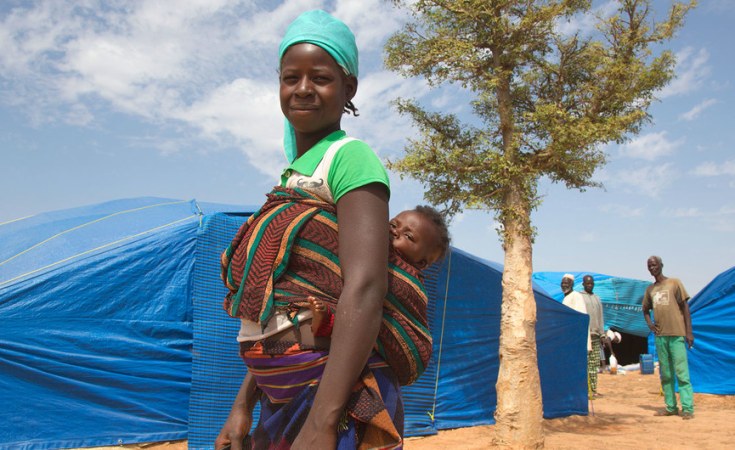 Marwa Awad/WFP
A mother and her baby at the IDP Pissila campsite in Burkina Faso.
The Conversation Africa (Johannesburg)
analysis By Olanike Adelakun

Internal displacement of people has been a recurring challenge in Nigeria. There are several factors that contribute to it, but violent conflicts caused by religious extremism and ethnic clashes remain the most important.

Violent attacks by Boko Haram since 2009 have displaced over two million people. Between 2005 and 2021, over 8,000 people lost their lives to clashes between farmers and herders across Nigeria, with hundreds of thousands also displaced.

Children account for about 60% of the internally displaced persons in Nigeria. Many of them live in camps and one in four are under the age of five. These children are vulnerable to abuse, violence and malnutrition. They also lack access to education, healthcare and a safe environment, among other basic amenities.

In my research, I examined the legal protection of children in five camps for internally displaced people. My study specifically focused on access to education, health and nutrition, protection from violence and child labour.

My data covered the number of children and the infrastructure available to enable access to education, healthcare and protection from violence and child labour. I found that most internally displaced children faced violation of all these rights on a regular basis.

As required by section 12 of the Nigerian constitution, Nigeria domesticated the Child's Rights Act.

Unfortunately, only one out of the six states of the north-east region, which has the highest number of internally displaced children, has domesticated the Child's Right Act.

Inadequate resources have made it challenging to realise the right to healthcare services too. Children have died of malnutrition and illnesses such as malaria and cholera due to lack of medication and quality food. I found that while there are medical structures in the camps I studied, the shortage of medicines and personnel at all times remains an impediment to providing quality healthcare services. Thus, many displaced persons rely on occasional interventions from humanitarian actors, which is not always a reliable source of healthcare.

Although camp officials and displaced persons have sometimes claimed not to be aware of any form of violence against children, my study and media reports show evidence of rape, gender-based violence, child or forced marriage and other forms of violence.

Due to the shortage of resources and meaningful sources of livelihoods, many households resort to child labour. Children have to beg and hawk and are used as farmhands so that they can support their families.

The legal framework for child protection is robust in Nigeria but the enforcement of the laws is challenging because of the plural nature of legislative domestication.

To effectively protect the displaced children in Nigeria, child welfare and protection should be placed in the exclusive list - that is, the list of issues that the Nigerian government makes uniform law on. This would make laws on child protection uniform and applicable throughout the nation. It is also important to make children's rights a constitutional matter under the fundamental human rights section of the Nigerian constitution.