Congo-Kinshasa: Child Miners - The Dark Side of the DRC's Coltan Wealth 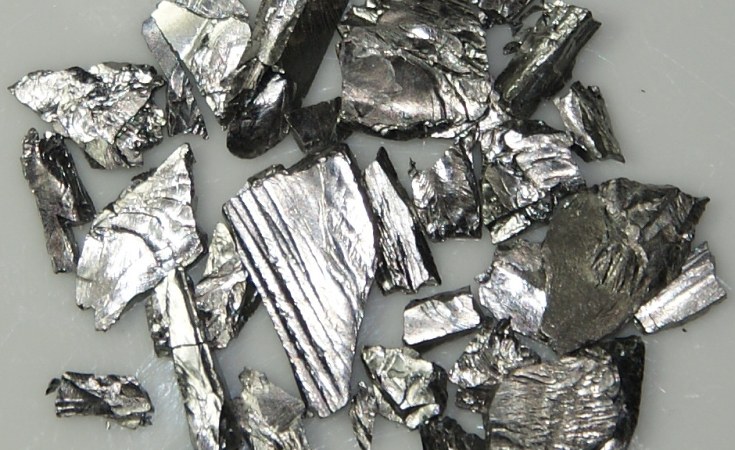 Hi-Res Images ofChemical Elements / Wikimedia Commons
Coltan is the colloquial name for the mineral columbite-tantalum ("col-tan"). Tantalum (pictured) is a hard, ductile heavy metal which easily forms a protective oxide layer, which makes it corrosion-resistant. Most tantalum is used for small capacitors with high capacity, like those in cellphones.
Institute for Security Studies (Tshwane/Pretoria)
analysis By Oluwole Ojewale

Laws and certification schemes aren't protecting the Democratic Republic of the Congo's most vulnerable - a fresh approach is needed.

Coltan is one of the world's most vital minerals, and 60% of reserves globally are found in the Democratic Republic of the Congo's (DRC) Kivu province. In 2019, 40% of the global coltan supply was produced in the DRC.

The mineral is used in cell phones, laptops and other devices because of its particular ability to store and release electrical energy. As 5G technology grows, the demand for Congolese coltan will increase. But this is not good news for everyone in the DRC.

Much of the country's coltan is extracted using the labour of over 40 000 child and teenage miners. Coming from remote villages and towns in Kivu, they either drop out of school or have never had the opportunity to attend. The informality of the extractive sector provides attractive job opportunities for vulnerable children, who serve as a pool of cheap labour.

Children work as washers and diggers in dangerous conditions. They also engage in petty smuggling, selling coltan for a pittance in towns along the borders with Burundi, Rwanda and Uganda. Doing adults' work in a hazardous environment, many child miners face harassment, abuse and ill health. Occupational hazards include daily exposure to Radon, a radioactive substance associated with coltan, which has been linked to lung cancer.

Child miners face daily exposure to Radon, a radioactive substance which has been linked to lung cancer

Faustin Kantanga, a civil society leader in Bukavu, told the ENACT organised crime project that coltan mines were rife with prostitution, sexually transmitted diseases and rape, and that child miners were exposed to these risks. Those travelling long distances to smuggle coltan are also vulnerable to child traffickers and recruitment by armed groups.

The quantity of coltan mined using child labour remains uncertified and untraceable. The illicitly extracted mineral is traded in the underground economy and funnelled into the global supply chain through smuggling, counterfeiting and collusion.

The DRC government has taken several steps to curtail the use of child labour in coltan mines. Laws have been passed, and the country has signed some of the certification standards in the extractive sector. The DRC's mining code was reformed in 2017 to penalise the use of child labour or the sale of ore mined by children. In line with national legislation and supply chain standards, traceability and certification schemes have also been adopted.

The Certification, Expertise and Evaluation Centre (CEEC) of precious and semi-precious mineral substances, established by the Congolese Ministry of Mines, is in charge of tracing and certifying coltan. The body is mandated to collaborate with international regulatory agencies, from mining sites to commodity markets in Asia, Europe and North America.

Notable international certification protocols signed by the DRC include the Regional Certification Mechanism of the International Conference of the Great Lakes Region, the Kimberley Process Certification Scheme, and the Dodd-Frank Act. The country is also a signatory to the Organisation for Economic Co-operation and Development Due Diligence Guidance for the responsible processing of minerals from areas in conflict, and the Conflict Minerals Regulation.

However, all these commitments have not prevented children from being exploited in the DRC's coltan mines. Mineral certification schemes are not properly implemented, nor is the law regarding child labour and associated hazardous working conditions. While the frameworks are complementary, their feasibility in the eastern DRC is questionable.

Administrative capacity to ensure compliance is lacking, and funding and staffing for the provincial departments tasked with monitoring child labour on mining sites are insufficient. Miners and extractive companies also circumvent the mineral certification protocols. Fieldwork by ENACT in the DRC revealed that the infrequent inspections were sabotaged by informants and even government officials whose warnings about upcoming site visits allowed miners to hide child labourers.

In sum, illicit coltan mining and trading in the DRC is enabled by the weak implementation of certification schemes, ongoing attempts to bypass regulations, and inadequate law enforcement. This casts doubt on the usefulness of all the certification schemes signed up to by the country.

A different approach is needed. The Congolese government should constitute and fund an independent task force with a mandate to prosecute private and corporate businesses culpable of recruiting child miners. The enrolment of vulnerable children in school should be incentivised through ring-fenced funding and awareness campaigns to limit their recruitment into mining work.

Given the problem of child labour in coltan mines, the approach to mineral certification needs a fresh look. International pressure groups can advocate for the various certification schemes to be harmonised so that they can be uniformly applied in the eastern DRC's mineral-rich regions.

Development partners should help train and equip civil society observatory groups at the local level to monitor and submit regular incident reports covering child labour in coltan mines. Such 'shadow reports' would assist in validating or invalidating the certification audits carried out by state officials.

Why DR Congo is a Magnet for Kenyan Firms