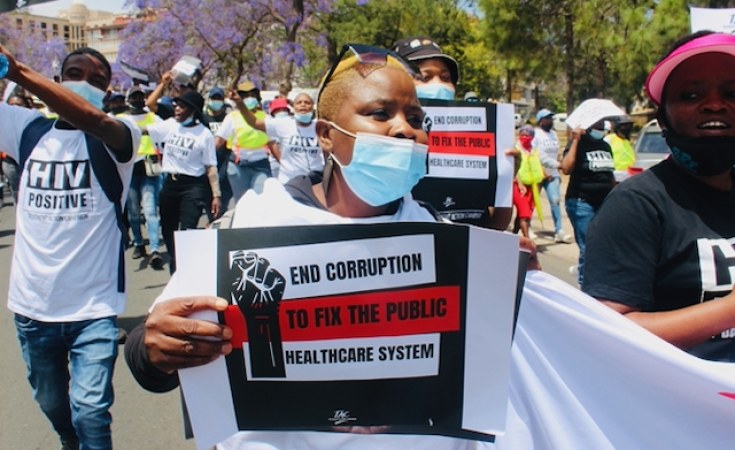 Mosima Rafapa/GroundUp
More than 200 people marched from Loftus stadium to the Union Buildings in Pretoria on Monday over the poor state of public health services.
GroundUp (Cape Town)
By Mosima Rafapa

The TAC convened a demonstration march to the Union Buildings on Monday against corruption in the health system and failing public health facilities.

The TAC says most facilities "are in shambles".

More than 200 people marched from Loftus stadium to the Union Buildings in Pretoria on Monday to protest against corruption in the health system, a root cause of failing public health facilities.

According to the Treatment Action Campaign (TAC), 90% of public health facilities in South Africa are in a poor state.

The protest called on President Cyril Ramaphosa "to act quickly to bring all perpetrators of corruption and financial mismanagement and maladministration to book".

TAC general secretary Anele Yawa handed a memorandum to Deputy Minister of Health Sibongiseni Dhlomo and to Mandla Feni from the presidency.

"Underpinning the collapse of the health system is pervasive corruption and a dire lack of accountability of public officials. Corruption and theft of public funds is rife in the Department of Health at all levels.

"We call on the Minister of Health to suspend all officials implicated in the Digital Vibes corruption scandal with immediate effect and to open criminal cases against them. We demand to know what systems will be put in place to recoup this money stolen from the health department," said Yawa.

Dhlomo said the department would start internal disciplinary processes and suspensions and would keep the public updated on this. It would also not oppose prosecutions brought against its officials.

TAC national chairperson Sibongile Tshabalala said that its community-led monitoring program in all provinces apart from the Northern Cape found that "facilities are in shambles" and instances where "people still wake up at 2am, only to be assisted late in the afternoon or sometimes turned away without assistance".

Tshabalala said a lack of choice in contraception methods was an ongoing problem, and women seeking abortions are still stigmatised.

Thozama Qomana, of the National Association of People Living with AIDS, said, "We still have clinics that run out of antiretrovirals. ... Clinics just close because someone tested positive for Covid and our members don't have referrals to go to other clinics."

Sikhumbuzo Nkosi spoke of ignorance and bigotry at a public clinic when it came to gender transition. "I was ridiculed by the security guards. I felt humiliated because they called other people and wanted to know why I was going to the family planning section," said Nkosi. "There was no privacy when I got inside the clinic. They all gathered around me. About five nurses didn't know anything about hormones or being transgender. I took out my clinic card and they still asked why I needed the contraceptives ... I couldn't educate them about our community, and then about hormones."

Nkosi said the clinic also did not offer pre-exposure prophylaxis pills for preventing HIV and that drug users are denied antiretrovirals "because they're told they will smoke the medication and that they should get cleaned up first".

"How's that their business?" asked Nkosi.

Other organisations that joined the TAC included the Positive Women's Network and the South African Network of Religious Leaders Living with or Personality Affected by HIV & AIDS.