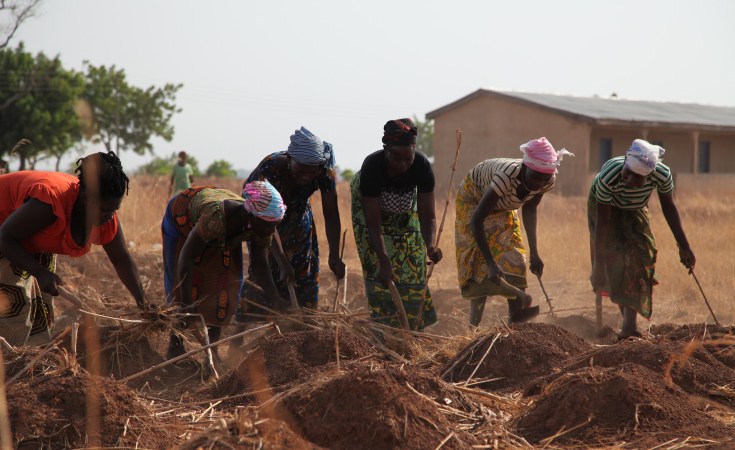 Wa — Network for Young Women Empowerment (NYWE), a non-governmental organisation in the Upper West Region, has appealed to traditional authorities and land owners to make fertile lands available to women in the region toundertake productive agricultural activities to enhance their livelihood.

The Chairperson for the NYWE, Madam Ida Nakaar,who made the appeal indicated that women farmers played key role in the development of the nation, and deserved to be supported to expand their farmlands to improve the living standards of their households.

MsNakaar was speaking at an eventto mark the International Day of Rural Women at Waover the weekend on the "Recognizing the critical rules and contribution of rural woman in agriculture."

The NYWE is an organisation that seeks to create a platform for young women and girls in the region to advocate issues affecting girls and their health, and also champion other gender related issues across the region.

She said the engagement was to afford women the opportunity to interact, discuss, deliberate and reflect on whether or not women farmersper their contributionto the food basket of the home and society at large,deserve fertile lands to cultivate.

"We are appealing to our chiefs and landowners to consider women who are into farming and really need fertile land to cultivate; they should not hand over just any available landwhen it is not fertile and cannot support agriculture," she said.

She enumerated low level of education, difficulty in acquiring land and access to credit facilities as some of the factors affecting women in the agricultural sector in the region.

Shecommendedthe government for the Planting for Food and Jobs (PFJ) initiative and said if women were givenfertilelands, they could take advantage of the programme to better their income.

An Agronomist,Madam Vivian Danuor,whoparticipated in the engagementmeeting also added thatwomen farmers in the region faced other challenges with regards to access to fertilizer, access to extension services and modern farm inputs.

She called on chiefs and landownersin the region to support smallholder women farmers toacquire fertile lands in order to increase their productivity and income and also bridge the productivity gap between men and women in the region.

Tagged:
Copyright © 2021 Ghanaian Times. All rights reserved. Distributed by AllAfrica Global Media (allAfrica.com). To contact the copyright holder directly for corrections — or for permission to republish or make other authorized use of this material, click here.