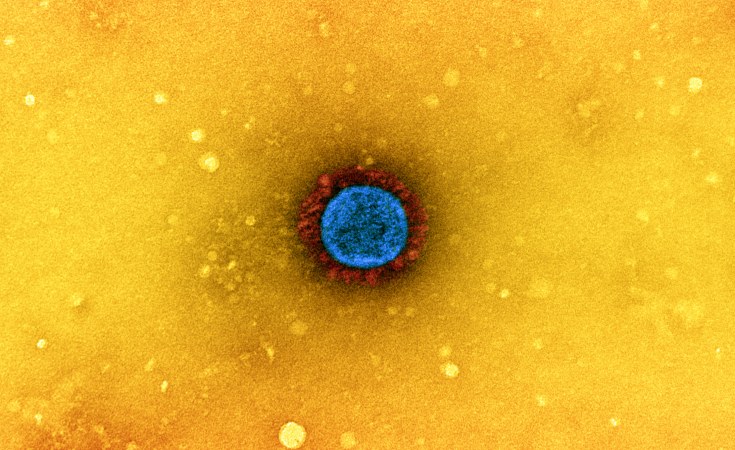 NIAID / Flickr
A transmission electron micrograph of a SARS-CoV-2 virus particle (UK B.1.1.7 variant), isolated from a patient sample and cultivated in cell culture. The prominent projections (red) seen on the outside of the virus particle (blue) are spike proteins. This fringe of proteins enables the virus to attach to and infect host cells and then replicate. Image captured at the NIAID Integrated Research Facility (IRF) in Fort Detrick, Maryland. Credit: NIAID
Voice of America (Washington, DC)
By Harun Maruf

Covid-19 deaths in Somalia were at least 32 times higher than the figures reported by the government during the early months of the pandemic, according to a new study.

The study, published by the International Journal of Infectious Diseases, estimates that between 3,200 to 11,800 people died from the effects of COVID-19 between March and September 2020 in the capital, Mogadishu.

In that period, the Somali government reported 99 deaths and 3,864 positive cases throughout the country.

Somalia reported its first case of COVID-19 on March 16, 2020. To date, the overall death toll given by the Somali government stands at 1,180, and the number of positive cases is at 21,269 in the country.

Researchers say there has been a considerable undercount in cases among the Somali population.

"It was not sufficient to assume, as many people had, that Somalia has just been a very lucky country," said Abdihamid Warsame, a research fellow at the London School of Hygiene and Tropical Medicine who was among the researchers.

Researchers used satellite images of graves from 2016 to September 2020, as well as interviews and other data collected on the ground to reach the conclusion.

Looking at information, there was a substantial increase after COVID-19 arrived in Somalia, Warsame told VOA Somali.

"Having looked at other potential sources of deaths, for example other outbreaks or any other event, we could not find anything else that could account for a large increase in deaths," he said.

But not everyone in Somalia fully supports the results of the research.

"I think this number is fine, it is a scientific way of doing things, but may not be truly representative of what deaths or what number of deaths that have actually occurred during this pandemic," he told VOA Somali.

He says the truth might be in between the low fatality number given by the government and the higher figures from the research.

Warsame says he is not arguing all new burials from March to September 2020 translate into deaths and a direct result of COVID-19, but says the pandemic had an impact on the population, which accounted for other deaths.

"During COVID-19 the usage of health services declined, the vaccination decreased, the use of maternal child services decreased, so these could all potentially lead to spike in deaths," he said. "Therefore, COVID-19 could have both direct and indirect impact on deaths."

Malik says the death toll figure given by the government is only based on people who have died of COVID-19 in health facilities. He said the registration system to capture deaths among the community does not exist in Somalia.

"The problem is that there is no definitive registration system for deaths in Somalia, and that is the biggest limitation that we are dealing with," he said.