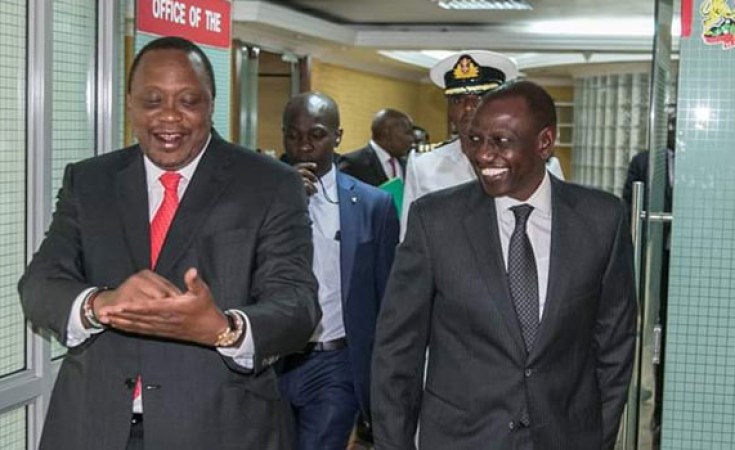 The duo who are perceived to be adversaries over the 2022 succession politics were filmed engaging in an animated conversation with President Kenyatta seen on almost three occasions inviting DP Ruto to his seat where they were seen conferring.

It was the first time in four months the two leaders appeared in public together. They last shared a platform on June 1, 2021 during the Madaraka Day celebrations which were held in Kisumu County.

The rift between the duo became apparent after the March 9, 2018 when President Kenyatta and former Prime Minister Raila Odinga joined forces through the famous handshake and resolved to work together to unite the country.

The partnership birthed the Building Bridges Initiative (BBI) constitutional review process which was heavily criticized by DP Ruto. Ruto constantly labelled the process as a pursuit by a few elite individuals to create positions for themselves.

Whereas President Kenyatta and the Orange Democratic Party (ODM) leader were resolute to have the process subjected to a referendum, the Court of Appeal invalidated BBI in August, sustaining an earlier decision by the Constitutional Court. Ruto welcomed the decsion saying: "there is God above who loves Kenya immeasurably. May God's name be praised forever".

President Kenyatta has previously accused his deputy of undermining his administration. In February 2021, he dared him to resign instead of criticizing the government from within.

"That is double speak, you can't be speaking of the failures of a government where you serve while at the same time outlining what you refer to as we have achieved as a government. You better resign," Kenyatta said

In the escalating tension that ensued thereafter, Ruto hit back and told his boss that he is a man "on a mission" with "no room for retreat or surrender."

"I'm a man on a mission. I have no space to retreat nor the luxury to surrender," Ruto said.

President Kenyatta is seen to favor be in support of Odinga's candidature in the August 9, 2022 polls and has been pushing other opposition leaders including One Kenya Alliance (OKA) principals Musalia Mudavadi, Moses Wetangula, Kalonzo Musyoka and Gideon Moi to back his ambition.

Ruto who has fashioned himself as a savior of the poor and committed to empower them through his bottom-up economic model once he forms the next government has on numerous occasions accused his opponents of ganging up against him in a bid to scuttle his presidential bid.

Ruto who has remained bullish in the face of a sustained onslaught by government functionaries has however stated that he is unbothered and expressed optimism that the millions of electorates who he frequently refers to as "hustlers" will install him as Kenya's fifth President.

In his speech during the Mashujaa Day celebrations, Ruto boldly stated that he was the right candidate to ascend to power in 2022 and vowed to protect President Kenyatta's legacy.

"I will ensure that the legacy you have set is protected," he stated citing the Big 4 agenda.

Ruto, Odinga and Mudavadi are all seeking to succeed President Uhuru Kenyatta who is serving his second and final term. Kenya will hold elections on August 9, 2022.