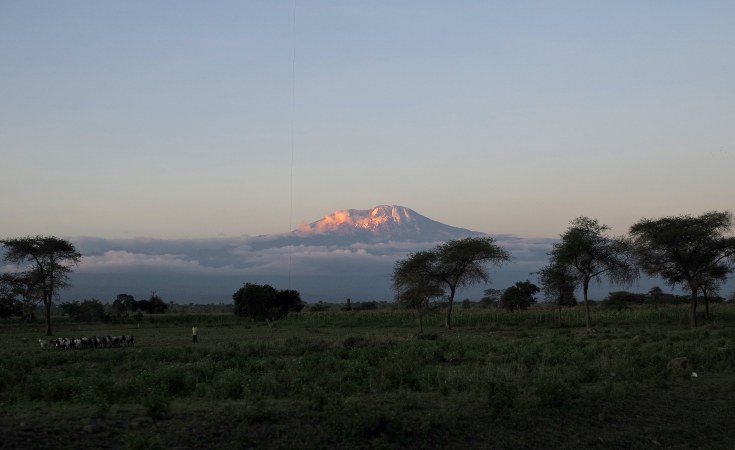 R Boed/Flickr
Mount Kilimanjaro at sunset, viewed from the Arusha-Moshi road in Tanzania.
The Monitor (Kampala)
By The East African

East African glaciers will disappear in the next two decades because of climate change, a new United Nations (UN) backed report warned Tuesday.

The report from the World Meteorological Organisation and other agencies, released ahead of the UN climate conference in Scotland that starts October 31, forecast that at current rates all glaciers on Mt Kenya, Tanzania's Kilimanjaro and Uganda's Rwenzoris - would be gone by the 2040s.

Only three mountains in Africa are covered by glaciers: the Mount Kenya massif, the Rwenzori Mountains in Uganda, and the continent's highest Mount Kilimanjaro in Tanzania.

Even though the glaciers are too small to act as significant water reservoirs, WMO underlined their touristic and scientific importance.

Mount Kenya, an extinct volcano that is a key attraction site for tourists because of its glaciers, is Africa's second-highest peak after Kilimanjaro.

It is expected to be deglaciated a decade sooner, the WMO said, which will make it one of the first entire mountain ranges to lose glacier cover due to human-induced climate change, according to the report.

"The rapid shrinking of the last remaining glaciers in eastern Africa, which are expected to melt entirely in the near future, signals the threat of ... irreversible change to the Earth system," WMO Secretary-General Petteri Taalas said in the report.

A report in 2017 said that the Lewis Glacier, the largest on Mt Kenya, has decreased by 90 percent in volume since 1934, with the highest rates of ice volume loss occurring around the turn of the century.

The State of the Climate in Africa 2020 report highlights Africa's disproportionate vulnerability but also reveals how investing in climate adaptation, early warning systems, and weather and climate services can pay off.

Apart from worsening drought which impacted agriculture, there was extensive flooding recorded in East and West Africa in 2020, the report noted, while a locust infestation of historic proportions, which began a year earlier, continued to wreak havoc.

In May this year, a separate report by British charity Christian Aid warned climate change is set to ravage tea production in Kenya, the biggest global supplier of black tea, threatening the livelihoods of millions of plantation workers and tea farmers.

The report looked at how shifting temperatures and rainfall patterns in tea-growing regions in Kenya, India, Sri Lanka and China could affect the quality and yield of the world's most popular beverage.

Kenya is highly vulnerable to climate change, with projections suggesting its average annual temperature will rise by up to 2.5 degrees Celsius between 2000 and 2050, said Christian Aid's report.

Ahead of crucial UN climate talks in Glasgow, campaigners are calling for countries to cut carbon emissions, cancel the debts of developing countries such as Kenya, and mobilise climate finance to help countries adapt.