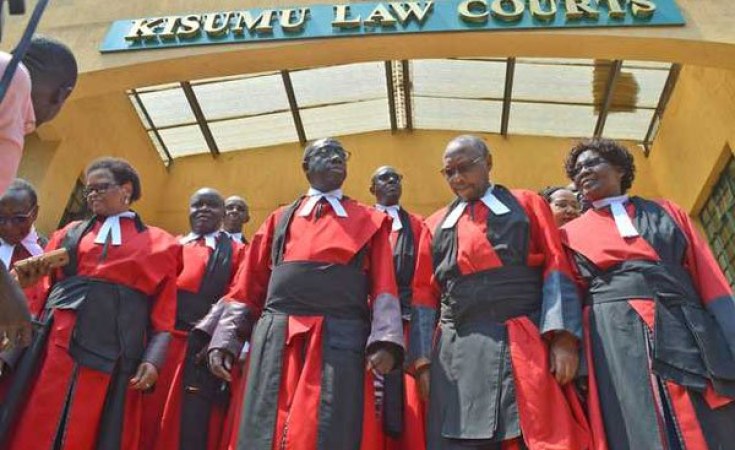 Three High Court judges are set to make a landmark precedent that will allow for the side-stepping of the President in the process of appointing judges.

Justices George Dulu, James Wakiaga and William Musyoka on Thursday ruled that six High Court judge nominees, who President Uhuru Kenyatta overlooked while gazetting names of new appointees, will stand appointed should the Head of State fail to submit their names within the next 14 days.

The judgment, if implemented, means the president will have no powers to reject High Court judge nominees in future, reducing the presidency to a ceremonial role in judicial appointments.

"Because the President has failed to perform his duty since July 2019 (when JSC nominated 41 judges for appointment to office), we are persuaded to find his power to appoint expired after 14 days. In advancement of the rule of law and to forestall further constitutional crisis and violation of the Constitution, we order that the nominees be deemed as appointed to their respective offices. This is the best way to unlock the constitutional crisis created by the President's failure to obey the court orders," said the High Court judges.

The judgment introduces a new twist to the stand-off between the Executive and the Judiciary over the delayed appointments.

The six appointees who were overlooked include George Odunga, Aggrey Muchelule, Joel Ngugi and Weldon Korir, who were promoted by the Judicial Service Commission (JSC) to the court of appeal in July 2019. Other nominees are chief magistrate Evans Makori and High Court deputy registrar Judith Omange, who were promoted as judges of the Environment and Lands Court.

President Kenyatta snubbed their promotions in June this year on grounds that they are tainted and have integrity issues. He appointed 34, leaving out the six, one having died during the impasse.

But in the judgment passed yesterday, President Kenyatta appears to have been the loser in the stand-off because the judges are now set to start their new duties without his nod.

Upon lapse of the 14 days, the six nominees will be deemed as duly appointed to their respective offices.

"Subsequently, the Chief Justice and the Judicial Service Commission (JSC) will be at liberty to take all necessary steps in having the nominees sworn in and assigned duties," said the bench while ruling on a petition filed by lobby group Katiba Institute.

Breach of the Constitution

The court said since the legal action was occasioned by President Kenyatta's breach of the Constitution and disobedience of court orders issued in February 2020, the office of the President will bear costs of the petition.

In making the decision to skirt the President should he again refuse to appoint the nominees, the court said the Constitution does not anticipate a scenario of how to enforce execution of an obligation that an officeholder has failed to perform.

The judges agreed with the petitioner to craft innovative ways of enforcement.

It was also held that there is no legislation that makes it mandatory for judges to be sworn in before the President; it is just a traditional practice that judges take oath of office in the presence of the President.

The court said the lacuna leaves it open for the head of the Judiciary to perform the function. Katiba Institute argued that the President had chosen to interfere with the JSC's extensive and constitutionally mandated appointment process.

In the long run, the court said judges are sworn in by the Chief Registrar of the Judiciary and not the President.

"The President has no discretion to tinker with the list of nominees as forwarded by the JSC. The list is forwarded to him by JSC to make appointments without any subtraction," said the bench.

However, the bench declined a request by the petitioner to declare Attorney-General Paul Kihara Kariuki unfit to hold office over his advise to the President in relation to the judges' appointment saga.

Katiba Institute, through lawyer Dudley Ochiel, wanted the declaration citing a statement the AG made in response to Chief Justice David Maraga (retired) in protest of the President's failure and delay to appoint the judges.

The court, however, said the petitioner did not provide evidence of how the AG voted in the selection of the 41 judges and the kind of advice he gave the President on the matter.

"Having taken part in the interviews, the AG was conflicted. If the Executive was of a contrary view, it should have been articulated by any other office not him," ruled the court.

You Have 14 Days to Appoint Judges, High Court Tells Kenyatta