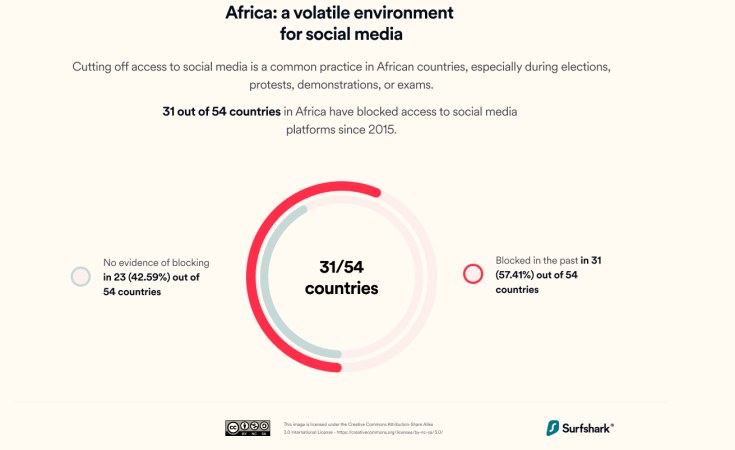 Surfshack
Since 2015, 31 out of 54 countries (57%) in Africa, including Sudan, have blocked access to social media platforms, according to the Amsterdam-based privacy protection firm Surfshark.
Surfshark (Amsterdam)
press release

A significant disruption to internet service in Sudan was recorded on Monday, affecting cellular and some fixed-line connectivity on multiple providers. According to cybersecurity company Surfshark, Sudan faces significant internet disruption for the first time in two years since July 2019, when the mobile internet shutdown left the country offline for 36 days. This time, internet disruption happened after military forces arrested at least four Cabinet ministers and a ruling council member.

"This morning, national connectivity in Sudan reached only 34% of ordinary levels. This is an alarming disruption that significantly limits free speech as it directly impacts the free flow of information online and news coverage of recent incidents with government officials," says Gabriele Racaityte-Racai, Communications manager at Surfshark.

Targeted internet disruptions, including shutdowns and social media restrictions, have gone together with political turmoil in Sudan since 2018 when protests transitioned to civilian rule.

The recent incident is still ongoing and might last for a long period of time as this is usual in the country. During the country's most prolonged recorded network disruption, Sudan restricted social media for 68 days to stop the protests and shut down Facebook, Twitter, Instagram, and WhatsApp. A more extensive mobile internet shutdown restricting more than just social media left Sudan offline for 36 days in July 2019.

Since 2015, 31 out of 54 countries (57%) in Africa, including Sudan, have blocked access to social media platforms. The research shows that 54% of affected countries in the region experienced blockings related to elections and 25.8% to political protests.

Surfshark, a Gold winner at 2021 Cybersecurity Excellence awards as a Most Innovative Security Service of the Year, is a privacy protection toolset developed to provide its users with the ability to control their online presence seamlessly. The core premise of Surfshark is to humanize online privacy protection and develop tools that protect users' privacy beyond the realm of a virtual private network. Surfshark is one of very few VPNs which have been audited by independent security experts.

Tagged:
Copyright © 2021 Surfshark. All rights reserved. Distributed by AllAfrica Global Media (allAfrica.com). To contact the copyright holder directly for corrections — or for permission to republish or make other authorized use of this material, click here.