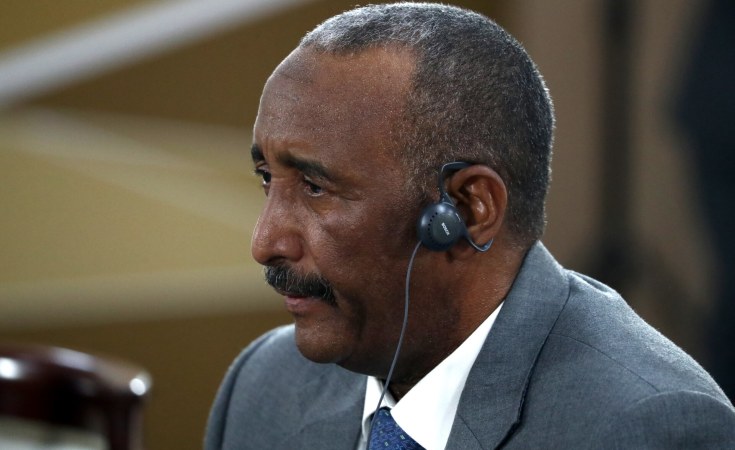 Khartoum, Sudan / Washington — Sudanese protesters demonstrated into the night Monday after the military seized power in an apparent coup.

Security forces opened fire on protesters earlier Monday, killing three demonstrators, according to the Sudan Doctors Committee. The group said at least 80 people have been injured.

Sudan's military chief, General Abdel-Fattah Burhan, declared a nationwide state of emergency Monday and announced the end of a joint civilian-military council that ran the country for the past two years.

The general made a televised address after military forces arrested Prime Minister Abdalla Hamdok and other officials of the Sovereign Council.

Burhan said he dissolved the council and the government due to "political quarrels that were threatening the security of the country" and announced that a "new government of technocrats will soon be appointed."

Journalist Michael Atit, who is in the Sudanese capital, told VOA's South Sudan in Focus that thousands of protesters flooded the streets of Khartoum following reports of Hamdok's arrest. Atit reported hearing gunfire and seeing tires burned in the streets.

Atit said most telecommunications in Khartoum have shut down, including the internet and radio stations. Only a state-owned television station was on the air, broadcasting patriotic music.

U.N. Special Representative for Sudan, Volker Perthes, said the military "took control of Khartoum, closing the entrances and the bridges, and closing down the airport and also taking control of state TV."

He briefed reporters in New York virtually from Khartoum, saying that as night fell in the city, he could see from his location barricades still burning and could hear occasional gunshots. He described the situation as "fluid."

The events were a sharp turnaround from what many had hoped would be a transition toward a civilian-led, democratic government in Sudan, where former President Omar al-Bashir ruled with an iron fist during 30 years of rule that ended with his ouster by the military in April 2019.

"Those in support of a military takeover will argue that this is a 'correcting' of the path of the revolution, but I think many who have had their hearts set on a transfer of power to a full civilian rule will see this definitely as a setback," said Isma'il Kushkush, an independent journalist and former East Africa reporter for The New York Times.

"I see this as a setback for the transition into a democracy," Kushkush told VOA.

Hamdok, an economist and diplomat who has worked for the U.N., was named the country's transitional prime minister in August 2019. The transition won strong support from Western countries, including the United States, which removed Sudan from its state sponsors of terrorism list.

But Hamdok faced stiff resistance from elements of Sudan's military. On September 21, forces still loyal to al-Bashir used tanks to block a key bridge and attempted to seize power. The coup was put down, and dozens of soldiers were arrested.

U.N. Secretary-General Antonio Guterres, the African Union, and the Arab League were among those expressing alarm and dismay Monday at the latest events in Sudan and called for the country to stay on a path toward civilian rule.

The White House said it was "alarmed" by the developments, while the U.S. State Department said it was suspending $700 million in financial assistance to the country.

"In light of these developments, the United States is pausing assistance from the $700 million in emergency assistance appropriations of economic support funds for Sudan," State Department spokesman Ned Price told reporters.

"We reject the actions by the military and call for the immediate release of the prime minister and others who have been placed under house arrest. The actions today are in stark opposition to the will of the Sudanese people and their aspirations for peace, liberty and justice," said principal deputy White House press secretary Karine Jean-Pierre.

The U.S. Embassy in Khartoum warned Americans in the city to shelter in place.

The U.N. Security Council is set to meet Tuesday to discuss the situation.

Last week, thousands of protesters took to the streets to voice concern about the prospect of a return to military rule.

"This country is ours, and our government is civilian," protesters chanted.

'Major blow' to democracy in Sudan

The Sudanese Professionals Association, an organization made up of trade unions instrumental in organizing the protests, called on the public Monday to go out and occupy the streets to protect the transitional government.

"It is a major blow to the democratic experiment in Sudan," said Cameron Hudson, a senior fellow at the Atlantic Council's Africa Center, an expert on Sudan and a former White House Africa director.

The apparent coup comes a day after U.S. Special Envoy for the Horn of Africa Jeffrey Feltman concluded two days of meetings in Sudan to underscore U.S. support for Sudanese democracy.

Hudson said Feltman received assurances from military leaders that they were committed to the work of the transitional government.

"The U.S. has invested more diplomatically in Sudan than almost anywhere else in the world in trying to prove that countries can move from autocracy to democracy," Hudson told VOA. "This is a setback to transitions in Chad, Mali and Guinea where the stakes are high, but which had not received nearly as much U.S. diplomatic attention as Sudan."

Kushkush said there had been other attempts at military intervention leading up to the coup Monday. However, despite earlier coup attempts and support for a military takeover, Kushkush said, there were also thousands of Sudanese in several cities and throughout the diaspora voicing support of the democratization process.