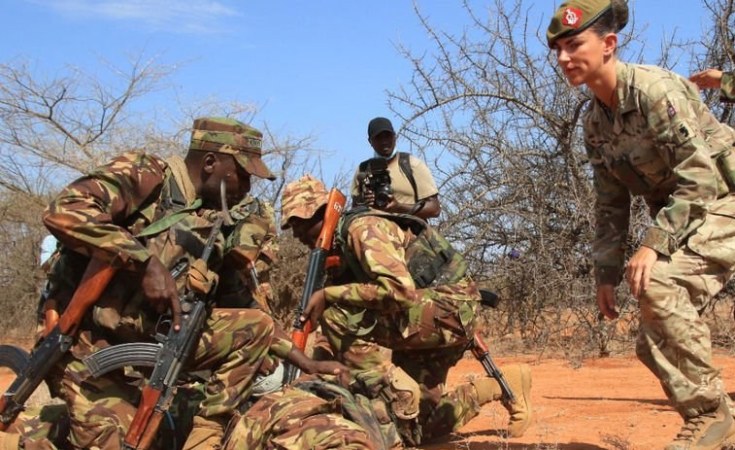 In the Majengo slums of Nanyuki town, the family of Agnes Wanjiru, whose body was found in a septic tank in 2012, is still seeking answers about her murder.

Wanjiru's body was found in the tank two months after she disappeared on March 31, 2012 while out with British soldiers at the Lions Court hotel.

But Ms Wanyua and her husband Mr John Muchiri later relented and opened up about what the family has gone through since Wanjiru died.

The couple says they helped raise Wanjiru since she was in Standard Three and lived with her until she joined Form Three. She dropped out of school after becoming pregnant.

On the day Wanjiru disappeared, Ms Wanyua said that upon enquiring, she was informed that she had gone out with a friend.

"I returned home but I did not find my sister. I was told that she had left with a friend called Florence. Days turned to months and efforts to find her were futile," Ms Wanyua said.

Wanjiru's daughter was nine months old when her 21-year-old mother was killed.

"The baby cried uncontrollably but she was too young to understand what had happened to her mother. We couldn't imagine that we had lost Wanjiru in such a heinous manner. However, there is a ray of hope," Ms Wanyua said.

Now, that child is 10 years old and in Grade Four at a school in Nanyuki.

Ms Wanyua said the girl's education was paid for by a charitable organisation, until recently when the sponsorship was withdrawn.

"We do not have money to pay for her schooling. We are appealing for assistance," she said.

Mr Muchiri, for his part, urged the government to speed up the investigations into the matter and unearth what transpired on March 31, 2012.

"We do not have money to hire a lawyer who can help us in seeking justice. We still don't know whether there has been progress in the case," Mr Muchiri said.

Wanjiru's badly mutilated body was discovered more than two months after she went missing, reportedly after an encounter with a British army soldier.

Ms Florence Nyaguthii and Ms Susan Nyambura told the media at the time that they met Wanjiru on that fateful night at the hotel, where she was accompanied by two white men that they thought were British soldiers.

"Wanjiru joined us at the bar at around 11pm and we started dancing. Moments later, I found her with a bottle of beer and I asked her to buy me some water and she told me that the beer was bought by a potential client who accompanied her," Ms Nyaguthii said then.

That was the last day the mother of one was spotted alive.