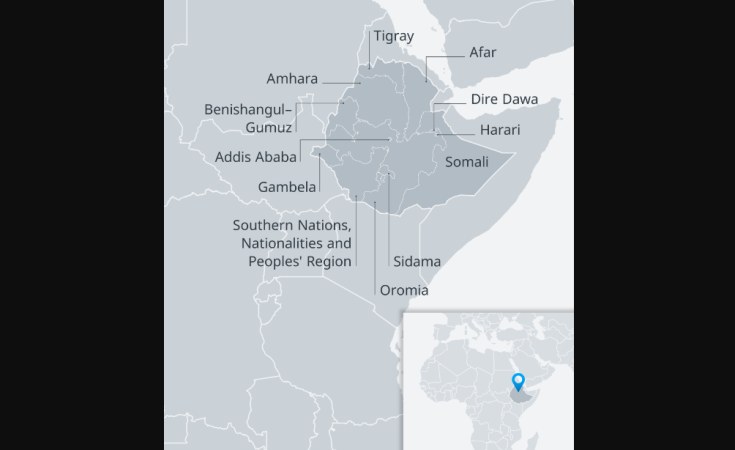 As Addis Ababa steps up its air offensive against the TPLF and Tigray forces advance on the ground, the situation for the civilian population is growing more desperate by the hour.

The Ethiopian Air Force launched a series of attacks against forces of the Tigray People's Liberation Front (TPLF) over the weekend. Two bombardments struck Mekele, the capital of Ethiopia's northern Tigray region, killing three children and wounding several people, according to the United Nations.

The increased use of airpower could be a sign that the federal government is worried about the Tigray forces' advance in the neighboring region of Amhara, according to William Davison, an Addis Ababa-based senior analyst at the International Crisis Group (ICG).

Davison told DW that the air raids must be seen in the context of the headway made on the ground by the Tigray forces, "which seem to be making steady advances through Afar and eastern Amhara and indeed are threatening to take control of the cities of Dessie and Kombolcha."

No winning an armed conflict

Much of northern Ethiopia is under a communications blackout, making battlefield claims difficult to independently verify. But residents in the Amhara city of Dessie on Thursday reported a heavy military presence, as displaced civilians from conflict-hit towns further north continued to arrive.

"There is no victory in a civil war," warned Bayisa Wak-Woya, a former Ethiopian UN official. "If it is a foreign enemy, you will liberate your territory and you will end [the war]. But there is no winning against your own people," he told DW.

Instead, suffering has increased among the civilian population. Over 5 million Ethiopians are now dependent on humanitarian aid for survival, and some 2 million have been displaced.

The UN said last week that the number of young children hospitalized due to severe malnutrition between February and August was double the number recorded during the same period last year.

During the week ending October 13, only 52,000 people in Tigray received food assistance, according to a report by the United Nations Office for the Coordination of Humanitarian Affairs (OCHA). That figure represents just 1% of the 5.2 million in need of help.

The recent airstrikes forced the cancellation of UN aid flights, after one plane had to turn back from a flight to Mekele to protect the lives of passengers and crew.

UN Emergency Relief Coordinator Martin Griffiths said in a statement that the "UN had not received any prior warning of the attacks on Mekele and had received the necessary clearances for the flight."

Griffiths reiterated the OCHA's "grave concern for civilians as airstrikes on Mekele continue and as humanitarian assistance into Tigray remains insufficient."

The Tigray forces have justified their advance with the need to break the blockade put in place by Addis Ababa, which has made aid delivery almost impossible. But the humanitarian situation is also rapidly deteriorating in the regions now under the TPLF's control, international aid agencies have warned.

More sanctions from the West?

The situation could prompt the European Union and the United States to go beyond verbal condemnation of warring parties.

"We have seen indications from senior EU officials recently that they will consider more punitive measures in the form of sanctions if this situation goes on," Davison said.

But some European actors want to avoid completely isolating the government of Prime Minister Abiy Ahmed. Ethiopia is seen as a linchpin in Western strategic and security policies in the Horn of Africa. There is also a perceived threat by Addis Ababa to let go of its Western allies and instead turn to Russia, China and Turkey.

Bayisa Wak-Woya is adamant that "there must be negotiations," and he has placed his hopes on his former employer, the UN, because ethnic strife has made an Ethiopian initiative impossible right now.

"If one side accepts, the other side will reject," he said.

Analyst Davison said he believes there is a chance that the warring factions will sit down for negotiations at some point in the near future.

"The Tigray leadership's plan is to increase the pressure on the federal government to try and force negotiations from a position of strength, but it would be incredibly destabilizing if that extended to an attempt to control Addis Ababa," said Davison.

Besides, the TPLF does not want to be blamed for the famine threatening its own people.

Nearly a year since the start of the conflict, Ethiopia's federal government -- which said in November 2020 that the fighting would be put down in a matter of days -- is increasingly under pressure.

Still, Davison remained cautious. "More fighting is almost certain, but perhaps new circumstances and the incredibly dangerous trajectory could lead all parties to look for ways to try and pause hostilities whilst humanitarian relief is prioritized, and some form of negotiations get underway," he said.

Mohammed Negash contributed to this article