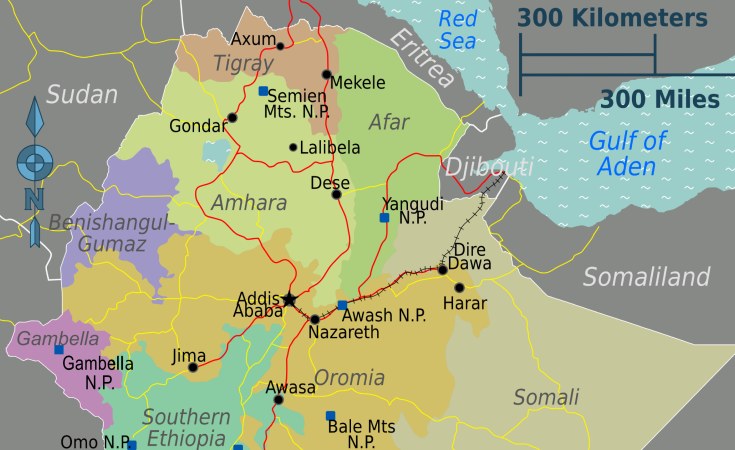 Peter Fitzgerald
Ethiopia's regions, with Tigray and Amhara in the north, and Oromia further south.
The Ethiopian Herald (Addis Ababa)
By Abdurezak Mohammed

Addis Ababa — The European Union (EU) should hold the terrorist TPLF accountable for obstructing humanitarian assistance in Tigray, so said Deputy Prime Minister and Foreign Affairs Minister of Ethiopia Demeke Mekonnen. Yesterday, Demeke held discussion with the Ambassadors of France, Germany, Hungary, Italy, the Netherlands, Portugal, Romania, Sweden, and Slovakia in Ethiopia regarding the current situation of the country, according to the report of the Ministry of Foreign Affairs of Ethiopia.

He restated the returning of only 242 trucks out of 1,111 that entered Tigray to supply aid and the aborted landing of a UN humanitarian flight in Mekelle by the terrorist TPLF.

He also reiterated that despite Ethiopia's effort to explain to the European Union Commission and member states about the current situation in Ethiopia, the EU and members states showed reluctance to accept the facts on the ground.

The refusal by the EU and the international community to openly acknowledge the unilateral humanitarian ceasefire declared by the federal government has also unnecessarily emboldened the terrorist TPLF clique, Demeke said.

Demeke also expressed Ethiopia's disappointment over the silence of the EU in the face of massive belligerence, murder, and destruction of civilians in Afar and Amhara states by the terrorist group.

He further highlighted Ethiopia's commitment to unfettered access for humanitarian assistance in Tigray with measures, such as reduced checkpoints and continued humanitarian flights to the state.

Demeke further said EU's recent resolution regarding alleged human rights violation in Ethiopia is unbalanced. He added that threatening to impose sanctions on the whole country instead of holding perpetrators of alleged violations accountable is unacceptable.

As to him, Ethiopia would conduct an all-inclusive national dialogue based on a roadmap that has been prepared by the new government.

Demeke further called on the EU and member states to extend their Humanitarian Air bridge support to the Amhara and Afar states besides supporting the sovereignty and integrity of Ethiopia, which is in the best interest of the European Union.

In a related issue, the United Nations (UN) said that authorities in the rebel-held Tigray forced UN humanitarian flights to be suspended.

The UN Humanitarian Air Services (UNHAS) flight from Addis Ababa had been cleared by federal authorities, UN spokesman Stephane Dujarric said, but "received instructions to abort landing by the Mekelle airport control tower," referring to personnel of the TPLF controlling the airport at the capital of Tigray.