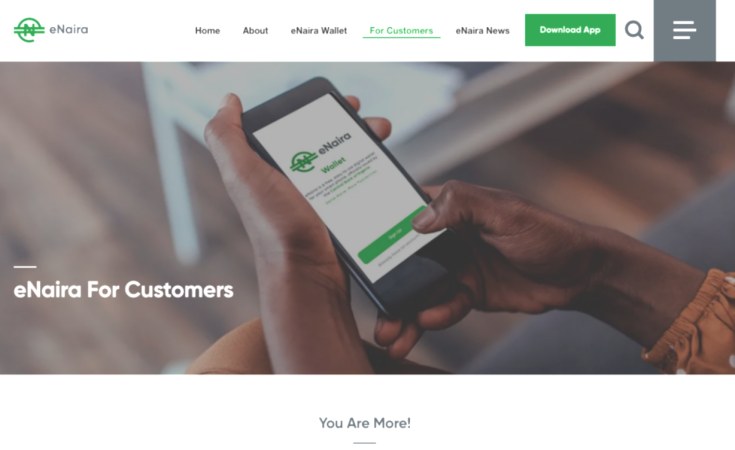 In the first 24 hours after it was unveiled, the Central Bank Digital Currency (CBDC), also known as the eNaira has continued to attract the interest of Nigerians with about 200,000 wallets downloaded in less than one day.

A breakdown of the figures obtained by THISDAY yesterday, showed that in less than one day after the digital currency was launched by President Muhammadu Buhari 156,700 consumer wallets have so far been set up, while 23,650 merchant wallets have been open, which was a reflection of the strong interest the innovation has continued to attract.

It is expected that in the coming days, the amount would rise as the Central Bank of Nigeria (CBN) intensify awareness on the eNaira.

Buhari had said with the eNaira, the country's Gross Domestic Product (GDP) was projected to rise by $29 billion in the next 10 years. He had stressed that Nigeria was the first country in Africa and one of the first in the world to introduce digital currency.

The president stated, "Indeed, some estimates indicate that the adoption of CBDC and its underlying technology, called blockchain, can increase Nigeria's GDP by US$29 billion over the next 10 years.

The president assured Nigerians of the safety and scalability of the CBDC. He disclosed that the journey to create a digital currency for Nigeria began in 2017.

On his part, Emefiele said with growing interest in CBDC around the world, the CBN had commenced extensive study, consultations, identification of use cases and the testing of the CBDC concept in a Sandbox environment as far back as 2017.

He had said the objective of the research was to establish a compelling case for the adoption of a digital currency in the country to enable a more prosperous and inclusive economy for all Nigerians.

He added that following the completion of the preliminary work, the researchers and experts at the CBN were able to establish that a digital currency will drive a more cashless, inclusive, and digital economy as well as complement the gains of previous policy measures and the fast growing payment platforms.

Emefiele added, "Therefore, the eNaira is Nigeria's CBDC and it is the digital equivalent of the physical naira. As the tagline simply encapsulates, the eNaira is the same naira with far more possibilities.

"The eNaira - like the physical naira - is a legal tender in Nigeria and a liability of the CBN. The eNaira and naira will have the same value and will always be exchanged at one naira to one eNaira."

Still Not Clear About eNaira? Here Are 10 Key Things to Know