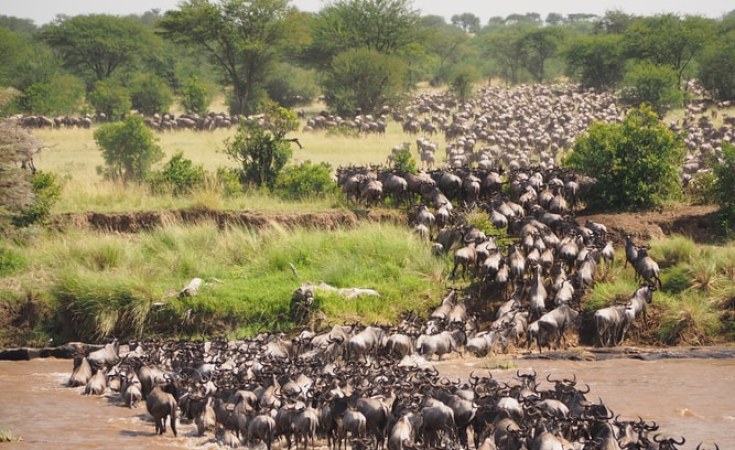 A Wildlife Species expert has warned of a possible disappearance of the Great Wildebeest Migration due to climate change effects.

Prof Noah Sitati from the World Wide Fund for Nature (WWF) said the spectacle was under serious threat as effects of climate change have seen lesser and lesser rains in the area, causing the ground to be drier and less likely to support growth of fresh grass.

He noted that just a small fraction of animals from Tanzania came to the Mara, in the south of Kenya.

"This time round the wildebeest migration to the Mara didn't spend the required time, they came very quickly, the major reason could be the drought experienced in the area as a result of climate change," observed the Wildlife expert.

According to Professor Sitati, grass and pasture on the Kenyan side was being depleted, noting that the Mara ecosystem was much smaller, compared to Serengeti in Tanzania.

"Being smaller, the adjacent disposal area where Wildebeests used to go is now being turned into fences, thus shrinking the vast areas meant for the wild animals," he explained.

The WWF's Wildlife Species expert now wants big industrialized countries such as the United States and China to take action(s), saying they were responsible for the most global emissions.

"While Tanzania and Kenya need to look into the issue and discuss workable ways of addressing the situation, there's also a need of putting serious pressure on the developed countries, and challenge them to put in resources to help countries that are mostly affected, otherwise, we are going to kill our biodiversity, such as Mt Kilimanjaro," he cautioned.

A recent United Nations (UN) backed report warned that East African glaciers were likely to disappear in the next two decades because of climate change.

The report from the World Meteorological Organisation and other agencies, released ahead of the UN climate conference in Scotland that starts October 31, forecast that at current rates all glaciers on Mt Kenya, Tanzania's Kilimanjaro and Uganda's Rwenzoris - would be gone by the 2040s.

According to research by Rhodium Group, China's greenhouse gas emissions in 2019 exceeded those of the US and other developed nations combined.

China is now responsible for more than 27 per cent of the total global emissions and the US, the world's second-highest emitter, accounts for 11 per cent of the global total.