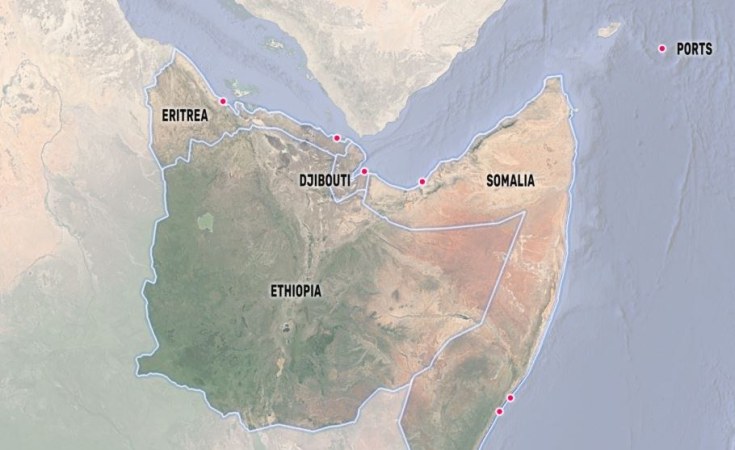 Salem Solomon/VOA
The Horn of Africa.
The Nation (Nairobi)
By Francis Mureithi

Communities in the Horn of Africa have been urged to address challenges occasioned by climate change, which threatens to exacerbate both the frequency and severity of extreme weather events and undercut significant development gains achieved over the last decade.

Climate change pressures are already interacting with conflict dynamics in the Horn of Africa. For example, the already-tense Nile water sharing negotiations between Ethiopia, Sudan and Egypt are being made more difficult by climate impacts that are likely to make the water supply more erratic, exacerbate water shortages, and possibly affect the Nile flow downstream.

Another example can be found in the Arabian Peninsula and Somalia, where unseasonably warm weather coupled with the civil war damage to Yemen's locust response system have worsened a locust outbreak that will threaten the food security of 25 million people in the region.

During the second USAID/Kenya and East Africa Horn of Africa virtual forum participants suggested various approaches to climate security risks in the Horn of Africa through a wide range of interventions and projects that are underway across the region.

It was noted that millions of people across communities in the Horn of Africa have suffered from the devastating impacts of drought, conflict, and other pressures.

This affects the ability of people, households, communities, countries, and systems to mitigate, adapt to, and recover from shocks and stresses in a manner that reduces chronic vulnerability and facilitates inclusive growth.

The forum promoted cross-country learnings through experience sharing on best practices, lessons learned, and practical implementation approaches on policy formulation and implementation, strengthening institutional capacities and investments across the conflict-affected zones in the Horn of Africa.

Ms Jennifer Karsner, USAID Ethiopia's Resilience Coordinator, urged participants to support national dialogues to build peace in the face of conflict that threatens the integrities of the local communities.

"There is a need for stakeholders to provide alternatives to violence with dialogues, job creation, and a sense of connection and hope for the youth through policymakers, trusted elders, and peacemakers to de-escalate conflicts," said Ms Karsner.

Ms Olga Petryniak, the Senior Director for Global Resilience, Mercy Corps, echoed similar sentiments in her keynote address that peace-building expertise and resources are included in the design of humanitarian and development investments.

"In Somalia for example, climate change has orchestrated unpredictable rainfall patterns, thus community groups who are dependent on rainfall like pastoralists face a higher risk," said Ms Perrine Piton, the Chief of Party of the Building Resilient Communities in Somalia Consortium of the Norwegian Refugee Council.

Ms Piton noted that engaging different groups at the community level is paramount, particularly, those along the different lines of marginalisation in Somalia.

According to Bridgit O' Connor, the Chief of Party of the USAID-Jonglei Food Security Program in South Sudan, development organisations have adopted a localised approach by involving communities in resilience and climate change adaptation,

She told the online gathering that they work with the community to use indigenous knowledge on the most suitable crops amid climate change.

Additionally, the programme builds the capacity of smallholder farmers to get improved varieties of crops that can be produced commercially for increased income generation.

She noted a significant challenge was the lack of empowerment for the local communities to overcome the severe effects of climate change, considering that they have been through tough times of war, coupled with trauma.

"No matter what we do in terms of providing people with improved economic opportunities, if those levels of trauma remain high, then any kind of stress will push people into conflict and distress," said Ms Connor.

Mr Victor Orindi, the National Coordinator of the Adoption Consortium in Kenya, stressed the need for good information services in making decisions about climate change.

He emphasised the need for agencies to work together, including government, research institutions, and Non- Governmental Organisations (NGOs) saying agencies bring their different resources, knowledge, and expertise to find sustainable solutions.

"Working together has ensured that some of the activities that had started are institutionalised so that they remain strong even after the end of development projects," said Mr Orindi.

Mr Sean Brooks, director at Tethered Up, emphasized on the significant role of localization and diversity in decision making when working in conflict contexts to accelerate recovery efforts.

He noted that organisations need to hire people from the conflict affected areas who know and have an understanding on what is going on and involve them in decision making.

Participants also heard of the three major approaches applied by the Uganda Government in addressing the recurrent conflict crisis in the Karamoja region.

Dr. Robert Limlim, the director of the third Northern Uganda Social Action Fund (NUSAF3) Project in the prime minister's office, noted that Uganda has an open-door policy for refugees.

The project is driven by community identification systems that include special consideration of the poor, deliberate intentions to tackle poverty and inclusion of social accountability systems, and continuous citizen engagement.

Mr Wilfred Opobo, the Uganda Country Manager for Saferworld, emphasised the need for asset-building during and after the conflict to promote resilience building saying assets can be converted into wealth to support the community's recovery process both economically and socially.

The learning forum brought together leaders and practitioners from humanitarian and development partners, government leaders, private sector investors in the countries embroiled in high-intensity civil wars, and communities facing persistent levels of insecurity or the risks of escalation in tensions and violence.