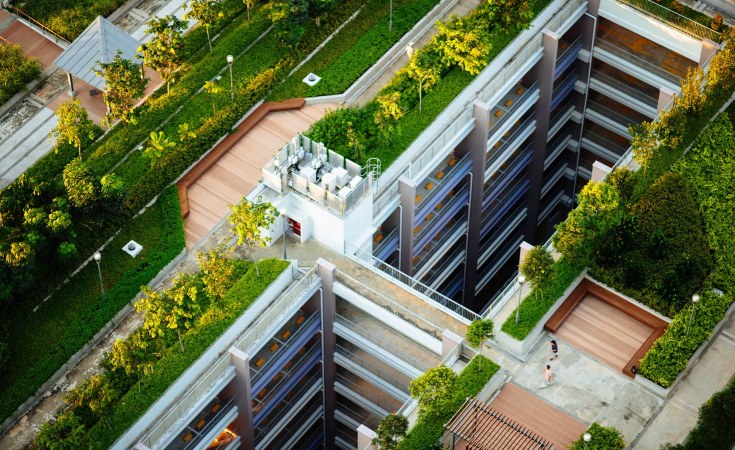 Overheated cities face disproportionate climate costs due to 'heat island effect'; average city could warm as much as 4°C by 2100

Beating the Heat: A Sustainable Cooling Handbook for Cities, prepared with RMI, states that by the end of this century, many cities could warm as much as 4 °C if GHG emissions continue at high levels. Even at 1.5°C of warming, 2.3 billion people could be vulnerable to severe heat waves.

"Science tells us that to keep global temperatures from rising by more than 1.5°C, we need to achieve net-zero emissions by mid-century. Sustainable and equitable urban cooling must be a part of cities' efforts to reach net-zero energy targets," said Inger Andersen, UNEP Executive Director.

In outlining the problem, the Sustainable Cooling Handbook for Cities describes how cities are warming quickly due to the "heat island effect", caused by a combination of diminished green cover, the thermal properties of the materials commonly used in urban surfaces, and waste heat from human activities.

The Handbook notes that:

Impacts of urban heat are not evenly distributed. Cooler cities, homes and streets are key to ensure climate justice. Lower-income districts and communities are usually the most vulnerable to heat, placing the negative impacts of excess warming disproportionately on those least likely to be able to afford or access thermal comfort. We need to transition to more equitable and sustainable ways of cooling our cities and make them liveable for all.

City officials working to make their cities cooler and more liveable are faced with a wide range of approaches - the challenge is where to start.

The guide's 80 supporting case studies and examples demonstrate the effectiveness of the strategies outlined and can help cities find an approach best suited to their unique contexts.

In collaboration with the Cool Coalition, the Extreme Heat Resilience Alliance, an initiative of the Adrienne Arsht-Rockefeller Resilience Center (Arsht-Rock) at the Atlantic Council, announced plans to disseminate the new Sustainable Cooling Handbook for Cities to their partner cities and counties- including Athens, Greece, Freetown, Sierra Leone, and Miami-Dade County, United States. The newly announced Athens, Freetown and Miami-Dade Chief Heat Officers will be the first to benefit from this comprehensive guide.

To meet the energy- and building-related emissions target of their Nationally Determined Contribution under the Paris Climate Agreement, Vietnam will also pilot the handbook in three cities, Can Tho, Tam Ky and Dong Hoi City.

Similarly, 10 Indian cities will collaborate with UNEP, India's National institute of Urban Affairs (NIUA), RMI and the Royal Danish Embassy of India to integrate cooling into their city masterplans.

United States: Heat reduction services from urban tree cover in the United States are estimated to be worth USD 5.3 billion to USD 12.1 billion annually. Globally, investing USD 100 million annually in street trees would give 77 million people a 1°C reduction in maximum temperatures on hot days.

Seoul, South Korea: An effort to restore the Cheonggyecheon stream that runs through the city replaced 5.8 kilometres of elevated expressway covering the stream with a mixed-use waterfront corridor. The waterfront corridor decreased temperature 3.3°C to 5.9°C compared to a parallel road a few blocks away.

Medellín, Colombia: Green corridors were created that follow and restore the geography of the area prior to recent development. From 2016 to 2019, the city created 36 corridors, 18 along major roads and 18 along waterways, covering over 36 hectares. The areas with green corridors have already seen temperature reductions of up to 4°C.

Paris, France: Paris is home of the first and largest district cooling system in Europe. When the water temperature in the Seine River that cuts through city is below 8°C, this water is used to provide "free cooling."

"The Global Covenant of Mayors is the world's largest alliance of cities taking action on climate, representing over 11,000 cities and one billion people. No matter how large or small a city, introducing sustainable urban cooling will both cut emissions and build resilience. We look forward to taking this handbook and sharing it across our worldwide network of cities so they can take immediate steps to make urban spaces cooler." Andy Deacon, Acting Managing Director, Global Covenant of Mayors.

"Cities are at the forefront of the climate crisis, so it's vital that local governments urgently adopt sustainable urban cooling solutions to protect their communities from rapidly rising temperatures while also limiting further global warming" said Noah Horowitz, Director of the Clean Cooling Collaborative." This guide is an invaluable tool for cities wanting to take meaningful action for both people and the planet."

"I am delighted to see how Mission Innovation has brought together the community to develop the Sustainable Cooling Handbook for Cities. This is a great example of what we mean by catalyzing clean energy solutions for all". We look forward to playing a role in its deployment in the next phase". Lee McDonough, Director General, Net Zero Strategy and International, UK Representative on MI Steering Committee".

About the UN Environment Programme (UNEP)

UNEP is the leading global voice on the environment. It provides leadership and encourages partnership in caring for the environment by inspiring, informing and enabling nations and peoples to improve their quality of life without compromising that of future generations.

RMI is an independent non-profit founded in 1982 that transforms global energy systems through market-driven solutions to align with a 1.5°C future and secure a clean, prosperous, zero-carbon future for all. We work in the world's most critical geographies and engage businesses, policymakers, communities, and NGOs to identify and scale energy system interventions that will cut greenhouse gas emissions at least 50 percent by 2030. RMI has offices in Basalt and Boulder, Colorado; New York City; Oakland, California; Washington, D.C.; and Beijing.

About the Clean Cooling Collaborative

Clean Cooling Collaborative is making climate-friendly cooling accessible to all. A philanthropic initiative of ClimateWorks Foundation launched in 2017 as the Kigali Cooling Efficiency Program (K-CEP), the Clean Cooling Collaborative focuses on super-efficient refrigeration and space cooling equipment, climate-friendly refrigerants, passive cooling, and integrated solutions that cool people and the planet.

About the Global Covenant of Mayors for Climate & Energy

GCoM is the largest global alliance for city climate leadership, uniting a global coalition of over 10,000 cities and local governments and 100+ supporting partners. The cities and partners of GCoM share a long-term vision of supporting voluntary action to combat climate change and towards a resilient and low-emission society. GCoM serves cities and local governments by mobilizing and supporting ambitious, measurable, planned climate and energy action in their communities by working with city/regional networks, national governments, and other partners to achieve our vision. Led today by Michael R. Bloomberg and European Commission Executive Vice President Frans Timmermans, the coalition comprises cities across 6 continents and 139 countries, representing over 900 million people or more than 10% of the global population.

Mission Innovation is a global initiative to catalyze action and investment in research, development and demonstration to make clean energy affordable, attractive and accessible to all this decade. This will accelerate progress towards the Paris Agreement goals and pathways to net zero.

Cooler Solutions for Urban Cities That are Feeling the Heat #AfricaClimateCrisis

Next Story
Tagged:
Copyright © 2021 United Nations Environment Program. All rights reserved. Distributed by AllAfrica Global Media (allAfrica.com). To contact the copyright holder directly for corrections — or for permission to republish or make other authorized use of this material, click here.