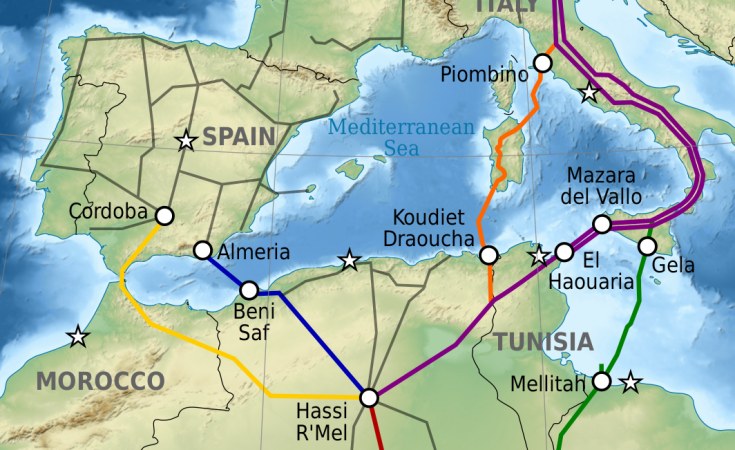 Sémhur / Wikimedia Commons (CC BY-SA 4.0)
A map of gas pipelines across the Mediterranean and Sahara desert. The Gaz-Maghreb-Europe pipeline is in yellow.
Voice of America (Washington, DC)
By Graham Keeley

Madrid — Spain faces a fresh energy crisis after Algeria shut off supplies of natural gas through one of the two pipelines linking Spain with the North African state.

Like many other European countries, Spain has been hit hard by soaring electricity prices in recent months.

A surge in demand as the world's economies began to recover from the COVID-19 pandemic has not been matched by supply, sending prices climbing.

Households have been hit by electricity prices which rose more than 40% in the past year, prompting the Spanish government to bring in emergency measures to reduce bills.

Now the fresh crisis over natural gas supplies from their North African neighbors has added to tensions in the energy market for Spain.

Algeria closed a land pipeline Sunday after a diplomatic dispute with its neighbor Morocco, through which the pipeline passes.

Algiers agreed to keep open a second pipeline which passes under the Mediterranean to Spain, but this does not supply as much natural gas as the land pipeline through Morocco.

Without any natural energy source except the burgeoning renewables market, Spain depends on Algeria for its natural gas supply.

Spain's geographic isolation in western Europe and lack of any domestic source of energy has left it especially vulnerable.

The Spanish media have reported that the country could face possible blackouts because of energy shortages.

El Pais, a Spanish-language daily newspaper, reported Tuesday that Spain would have to deliver liquified natural gas, or LNG, supplies by ship which could prove costly as other countries are competing for the same supplies because of a world shortage of the energy source.

She added that Algeria agreed to supply more gas to Spain if the latter needed it.

Enagas, a Spanish company which owns and operates the country's energy grid and is one of the biggest LNG transporters in western Europe, said in a statement, "There are no objective signs of a situation of lack of gas supplies in the coming months."

Algeria said it was planning to stop shipments through the Gaz-Maghreb-Europe pipeline which traverses Morocco and carries about 10 billion cubic meters (bcm) per year.

Algiers took this step after cutting diplomatic ties with Morocco in August and accusing its leadership of taking "hostile actions." Algeria further accused Morocco of aiding the Movement for the Autonomy of Kabylie, a regional nationalist movement in Algeria, of starting a series of fires which ravaged the country, an accusation which Morocco denied.

Algeria's decision to shut off a pipeline comes as natural gas prices have soared in recent months across Europe because of a shortage of supplies from Russia, pushing up electricity bills for consumers.

Spain hopes that it can weather the storm by using deliveries of natural gas from the Medgaz pipeline which passes under the Mediterranean directly from Algeria to Spain.

Analysts said that events in North Africa did not help a difficult situation in the world energy market as supplies to Europe were restricted by Russia, the continent's most important supplier of natural gas.

"The most important factor is Russia because it is restricting supply. Demand is going up because economies are recuperating but supply is not rising because the primary supplier for Europe is Russia," Massimo Maoret, associate professor of strategic management at IESE business school in Madrid, told VOA.

"On top of that you have the situation in Algeria which is creating more uncertainty. Algeria has promised that supply will be ensured. It is an additional strain on dynamics which are building on global tensions."

Political pressure has mounted on the Spanish government after electricity prices for consumers rose 44% over the past year, according to data from the National Institute for Statistics.

Jorge Sanz, an analyst at Nera Economic Consulting, said supply was not in doubt so government reassurances were well founded. He did say prices may rise and could possibly affect consumers.

"The Medgaz pipeline will be expanded by New Year to ensure it carries 10.5 bcm (billion cubic meters), the same as the line which passes through Morocco. It is a temporary shortfall which can be covered by reserves," he told VOA.

"However, what is in doubt is the price of natural gas which could go up -- or it could go down -- and this could be passed onto the electricity prices for consumers."

Some information for this report comes from Reuters.