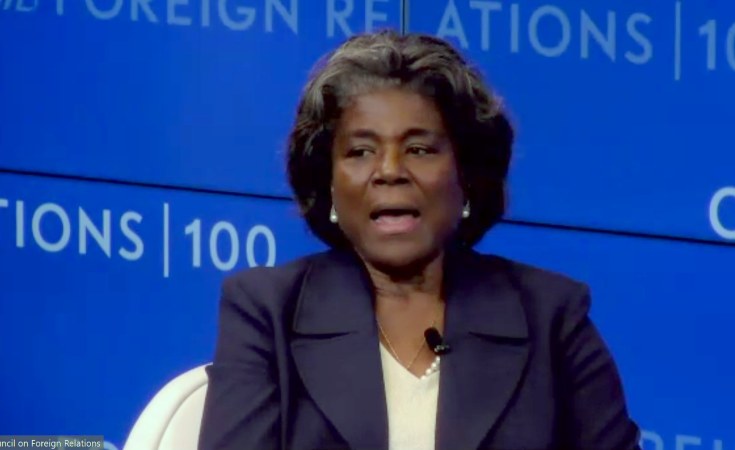 CFR
U.S. Ambassador to the United Nations Linda Thomas-Greenfield, addressing the Council on Foreign Relations in New York, issued an urgent appeal for a ceasefire in Ethiopia.(screen shot)
The Nation (Nairobi)
By Aggrey Mutambo

Regional leaders worry escalating violence in Ethiopia could make it difficult to end the crisis, signalling a dangerous path for the country.

The concerns have been raised from capitals across the world as the Tigray People's Liberation Front (TPLF) - once the ruling party - continues its advance to Addis Ababa, taking Dessie and Kombolcha cities just days ago.

Picking cue from the African Union, the UN Security Council raised "serious concerns" about the impact of the war "as well as stability of Ethiopia and the region in general".

The council, to which Kenya is a member, asked warring parties "to refrain from inflammatory speech and incitement to violence and create conditions for inclusive national dialogue".

However, the calls came as opponents of Prime Minister Abiy Ahmed formed an alliance aimed at bringing him down " by any means necessary".

According to Admassu Tsegaya, the spokesman for the alliance known as the United Front of Ethiopian Federalist and Confederalist Forces, they intend to reverse the "harmful effects of Abiy's autocratic rule".

He said the nine groups are working together to help create a transition that will exclude Abiy.

The alliance's announcement ran counter to the AU and UN, who recognise Abiy as the legitimate leader of government, though they have asked him to open dialogue with other groups.

The TPLF had previously joined forces with the Oromo Liberation Army (OLA).

Oromia leaders, who initially saw the Tigray crisis as a distant but short-lived clash, have now been jolted to act.

At the same time, Ugandan President Yoweri Museveni has called for a summit of the East African Community (EAC) to discuss the growing war.

Ethiopia is not an EAC member but borders Kenya and South Sudan, both fearing an increase in smuggling of weapons and a possible influx of hundreds of thousands of refugees if the conflict does not end.

Analysts say the expansion of the war is TPLF's way of seeking "a softer underbelly" of Abiy's government, even as it seeks out ways of sustaining the supply lines.

Leaders beseeching Abiy and the TPLF to talk have expressed frustrations.

"I have lent the full weight of my office in insisting that despite the pertaining circumstances surrounding the crisis, fighting must stop," Kenya's President Uhuru Kenyatta said on Wednesday.

President Kenyatta admitted no mediator or pressure may push Ethiopia to the table to negotiate, unless the warring parties see it as necessary.

According to Workneh Gebeyehu, the Ethiopian diplomat who heads the Intergovernmental Authority on Development (Igad), "an all-inclusive national dialogue and reconciliation is in the best interest of the country and the region".

William Davison, an analyst at the International Crisis Group, thinks the TPLF is motivated to expand territory in order to assure its supply lines, as well as try to make alliances and make up for its weaknesses.

"This potentially places the TPLF to strike east so as to control the Djibouti corridor, therefore maximising the pressure on Ethiopia. It also means the group will control the main trade route for Ethiopia, and potentially rerouting humanitarian supplies from Djibouti directly to Tigray," Davison said in a Podcast on Thursday, referring to the latest TPLF victories.

"The TPLF could also push south and take over the federal government."

Though the TPLF has profited from weaknesses in the Ethiopian National Defence Forces, Davison said it is not a guarantee any losses for Abiy amount to gains by TPLF as the group is still unpopular outside Tigray.

Many remember the atrocities committed by TPLF against other ethnic communities when it was in power.

The unpopularity may provide breaks on its campaign towards Addis Ababa, he said, given that it may face resistance from Abiy and other groups.

On Friday, the Ethiopian government suggested it has slammed the dialogue door on TPLF and the OLA, accusing them of violence.

"There is no equivalence between a democratically elected government and terrorists...that continue to cause violence and destruction," the Federal Democratic Republic of Ethiopia Government Communication Service said.

"It is the responsibility of the government to secure Ethiopia and keep our citizens safe. We will never waiver in that responsibility. International partners must stand with our democracy."

Abiy has since recalled army veterans to join the fight and asked residents to support the cause of "burying the terrorists".

Historians suggest Ethiopia's refusal to heed calls of dialogue and truce is rooted in the way war was used to solve past crises, only to create new problems.

"The preservation of Ethiopia's independence was through military prowess," said Ken Oluoch, a professor at Moi University.

Even after defeating Italians in the Battle of Adowa in 1896, ethnic rivalry remained.

"The current war is not the last since resistance to dominance characterises politics of communities. The other reason for these wars is the militarisation of politics. This was part of the revolution of the 1970s," he said.

The TPLF and allied rebels defeated the Marxist regime of Mengistu Hailemariam in the late 1980s but the win only led to more tense ethnic relations.

"Ethiopians should realise the problems of relying on the military to resolve conflicts and give dialogue a chance," he said.

Previous Story
Next Story
Ethiopia On the Brink

Ethiopia On the Brink