Nigeria Moves Against Malnutrition, Set to Launch Operation Feed Yourself 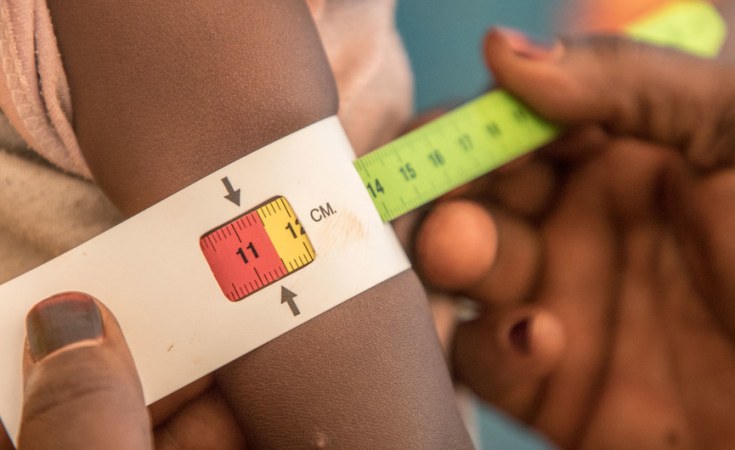 WFP/Simon Pierre Diouf
Many young children are suffering the effects of malnutrition.
This Day (Lagos)
By Deji Elumoye

Nigeria, in a bold move to fight malnutrition in the country, has finalised arrangements to launch 'Operation Feed Yourself' among the citizenry.

Already, the federal government in collaboration with states under the auspices of the National Economic Council and the National Council on Nutrition, will evolve an 'Operation Feed Yourself' initiative to encourage the establishment of urban farms and small home gardens.

Vice-President Yemi Osinbajo made this known in Abuja during a high-level meeting on nutrition attended by United Nations Deputy Secretary-General, Mrs Amina Mohammed, state governors, representatives of development partners including UNICEF, the Bill and Melinda Gates Foundation, the Aliko Dangote Foundation and convener of the UN Food System Dialogue, Mrs. Olusola Idowu, who is also the Permanent Secretary, Federal Ministry of Budget and National Planning.

The plan for 'Operation Feed Yourself' is one of the three major plans arising from the UN-backed Food Systems Dialogues, to advance the fight against malnutrition.

Others are providing support for farmers across the country, especially by providing useful weather and soil pattern information that will improve farming yields and also encourage state governments to ensure prompt release of budget for nutrition and related activities.

According to Osinbajo, there are practical steps that can be taken by the states and federal government in the next 12 months, adding that: "I think that some of the suggestions are important, especially those that have come from the UN Food System Dialogue."

He listed the different stages as: the establishment of Agribusiness Investment Hubs or farm settlements; the establishment of urban farms and homestead gardens by individuals and schools; the adoption of weather information to support farming; leveraging the support of the UN agencies and other partners for nutrition activities, and the call on MDAs and states to release funding for nutrition activities.

"States and the FGN will promote what the convener has described as 'Operation Feed Yourself'. This is more of the establishment of urban farms and homestead gardens. This is simply something that we think should be a mass appeal to citizens in the states, and the encouragement we can give them so that individuals and schools develop their own farms or homestead gardens," the VP noted.

"This obviously not only helps individuals and families but the excess can be sold to others and generally improve food security.

"The establishment of Agribusiness Investment Hubs or farm settlements or farm estates or any variety of those kinds of integrated farming arrangements will improve food and nutrition security. What we are recommending is the sort of model that Oyo State has or any of the variety that states have. That sort is obviously recommended because of the way that it is structured and the obviously good result that they have been getting," he added.

On funding of nutrition and related activities by MDAs and states, the vice-president noted that "this is something that we have made a point of importance even at the National Economic Council meetings.

Osinbajo urged state governments to adopt partnerships that can be effective in scaling up nutrition and related activities.

According to him, "It is also clear that we can leverage on the support of the UN agencies and other partners like the Foreign, Commonwealth & Development Office (FCDO), United States Agency for International Development (USAID) and the World Bank, as well as our development partners, the Bill and Melinda Gates Foundation and Aliko Dangote Foundation.

"The Aliko Dangote Foundation was able to show what they have been doing especially with de-risking facilities that could be used by farmers in the various localities all over the country."

Acknowledging the leadership of Nigeria to the UN agenda 2030 and the Africa Union agenda 2063, the UN Deputy Secretary-General, Mrs Mohammed, on her part, said the solution to many of the challenges associated with malnutrition "lie in Nigeria's recent commitment through the Food Systems Summit process".

She said: "I will like to pay tribute to the leadership of the Vice-President, Prof. Osinbajo, and to the efforts of Mrs Olusola Idowu, as the national convener of the virtual engagement by His Excellency at the pre-summit and clear, focused, ambitious national pathways that were published ahead of the Food Systems Summit in September."

Mohammed added that: "At the summit itself, His Excellency the president made decisive and inspiring commitments, and all these efforts of the emerging pathways, Nigeria has demonstrated a holistic approach to the food systems transformation which really underpins that transformation that it is about climate, it is about nutrition and about an inclusive economy."

Also speaking, the Chairman of the Nigerian Governors Forum, Dr Kayode Fayemi, said despite dwindling financial resources, the states will continue to "push on the frontier of improvement in nutritional issues".