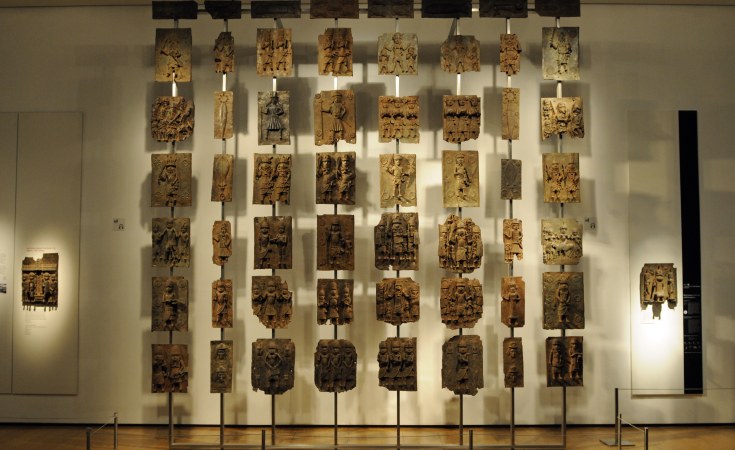 French forces stole the artifacts from the West African nation amid a bloody colonial takeover. After over a century, the items are finally heading home.

France on Tuesday transferred ownership of 26 treasures that were looted from Benin during colonial times.

The objects, including three totemic statues, jewelry, a scepter and a royal throne, are due to arrive in Bennin later this month — around 130 years after they were looted by French forces.

Talon said he felt "overwhelming emotion" at recovering the treasure.

Benin's president described the objects amounted to "our soul," rather than, "cultural goods" — the term used by France to describe them.

He made the comments while at the presidential palace in the French capital, where France signed over the artifacts to Benin.

France's President Emmanuel Macron, who was at the handover, hailed it as "a symbolic, moving and historic moment."

The items are being removed from the Quai Branly museum in Paris.

In Benin, the artifacts will be exhibited at various sites, including a former Portuguese fort in the city of Ouidah, once a slave-trading hub, while awaiting the completion of a museum in Abomey to house them.

Why is France handing over the items now?

Nigeria said last month it had agreed with Germany on the return of hundreds of so-called Benin Bronzes.

An advisory committee to the Netherlands' government in 2020 found that the country should return looted art to its former colonies.

Talon emphasized that Tuesday's handover was the first step in a large-scale restitution process.

He said he was reserving his enthusiasm until France had returned other key artifacts.

"Beyond this handover, we will continue the work," Macron promised.