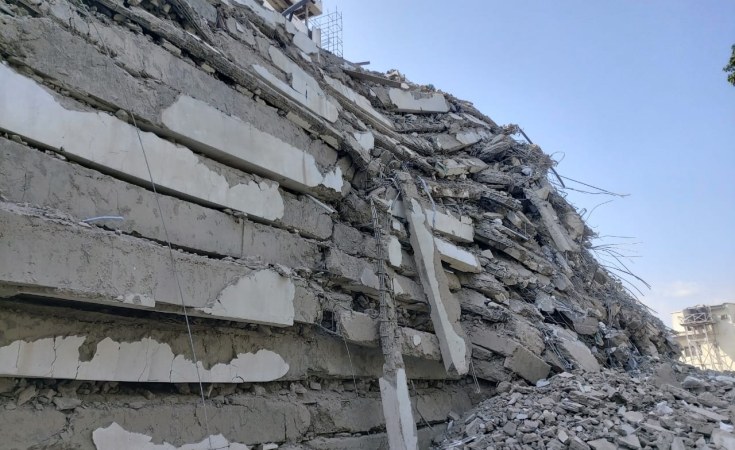 Premium Times
Aftermath of the building collapse in Lagos.
This Day (Lagos)
By Segun James

Two more bodies have been recovered from the site of the collapsed high-rise buildings in Ikoyi, bringing the number of the dead to 45.

The Lagos State government disclosed this in a statement yesterday.

The government, however, denied speculations that the two other buildings, sharing space with the collapsed one had been marked for demolition.

Commissioner for Information and Strategy, Mr. Gbenga Omotoso, in a statement, said the identification of bodies of the victims has continued at the Infectious Diseases Hospital (IDH), Yaba, Lagos.

He said 32 families had so far submitted DNA samples to identify bodies of their people, adding that in cases, where identification was clear without arguments, the bodies would be released to the families.

A committee to supervise the identification and release of the bodies has also begun work. The committee comprises senior officials of the Ministries of Health and Justice.

Omotoso explained that, contrary to speculations, "No directive has been given for the demolition of the two high-rise buildings standing at the site of the 21-storey collapsed building in Ikoyi, Lagos.

"The panel of inquiry instituted into the collapse of the building has continued to sit and an integrity test on the two buildings is yet to be conducted. It is, therefore, wrong to assert or speculate that the buildings will be demolished.

"The operation at the site of the collapsed building continues. Vehicular movement around the site has been smooth, following the reopening of the road."

Meanwhile, the six-man independent investigation team set up to determine the immediate and remote reasons for the collapse has continued to sit.

Governor Babajide Sanwo-Olu of the state, recently, named members of the panel at the scene of the incident, comprising professional builder, town planner, structural engineer and legal practitioners - all from the private sector.

President of Nigeria Institute of Town Planners (NITP), Mr. Toyin Ayinde, is the chairman of the panel, while Ekundayo Onajobi, a lawyer in a private law firm, is the secretary.

The panel's terms of reference also included ascertaining whether there was a compromise of the building codes by the developer, his contractor and statutory regulatory agencies.