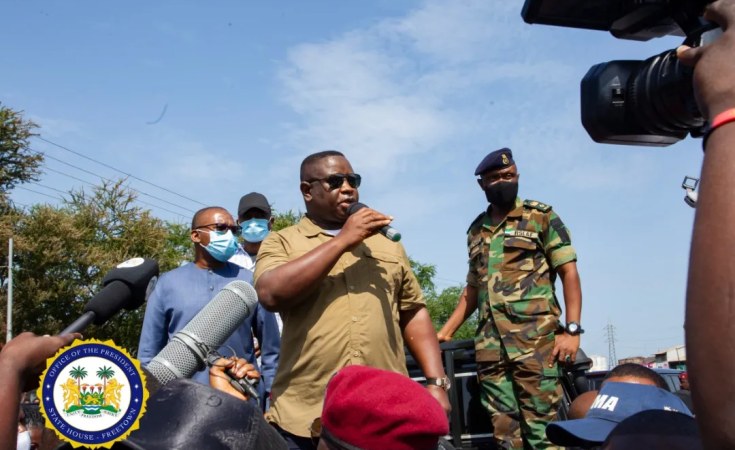 State House, Sierre Leone
President at the scene of a deadly oil tanker explosion in Freetown on November 7, 2021.
The East African (Nairobi)
By Kemo Cham

The group of 10 Senegalese medics airlifted by the World Health Organisation (WHO) is part of the international Emergency Medical Teams (EMT) requested by the West African country, which is struggling to attend to the cases of people with severe burns from the fire disaster.

The explosion occurred in an industrial estate in the eastern part of the capital Freetown, when a truck collided with a loaded fuel tanker. Over 90 people were declared dead a day after the incident, while 90 others sustained severe injuries.

Most of the victims are said to be residents of the area, who rushed to the scene of the accident to fetch fuel from the leaking tanker.

As of Wednesday, the death toll had risen to 115.

Over 80 people whose bodies couldn't be identified were buried on Tuesday at a mass funeral ceremony presided over by President Julius Maada Bio.

Family members who identified the bodies of their loved ones were handed their remains for private burial.

The Ministry of Health says the severity of some of the cases of those hospitalised required specialised care that the country could not afford, including the equipment and medicine.

Sierra Leone's health minister Dr Austin Demby said the country's healthcare system wasn't equipped well enough to handle the disaster due to both the magnitude and severity of the cases.

"Our hospitals are designed to manage one or two emergency incidents, maybe three, four or maybe ten. But to have a situation where we have over 90 people dead within a short period of time, and to have over 90 people hospitalised in various stages of illness is a very shocking situation for any country anywhere in the world," he said.

He added that "It's different when you see pictures in the media, but when you go to the hospitals and see our brothers and sisters, with 70 percent, 80 percent burns, it's very heartrending."

The Senegalese medics arrived two days after the WHO airlifted 6.6 tonnes of medical supplies to the country as part of the international efforts in responding to the calamity.

A WHO statement said the team included an orthopedic trauma surgeon, an anesthesiologist, a visceral surgeon, and several specialist nurses.

The UN health agency says in addition to supplementing the work of the local Sierra Leonean experts, the foreign specialists will also provide training to help strengthen the capacity of the local staff.