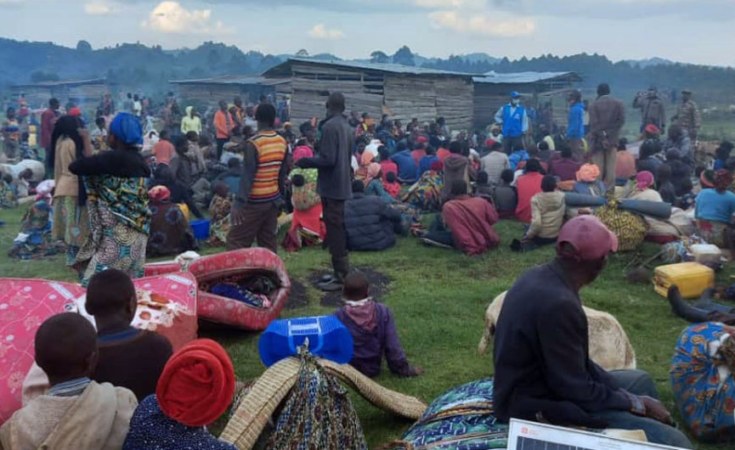 UNHCR
A group of Congolese asylum-seekers wait at the Bunagana border point after crossing into Uganda from the Democratic Republic of the Congo.
Deutsche Welle (Bonn)
By Antonio Cascais

There are reports of renewed fighting between various militia groups and the military in eastern Congo. This dampens hopes of an end to the long-simmering conflict in the region.

The Congolese army has reported that the March 23 Movement (M23) rebel group attacked villages in North Kivu province near its eastern border with Uganda.

The fighting at the beginning of the week cause some 11,000 people to flee across the border to Uganda, the UN said.

M23, which has been largely inactive since capturing swathes of territory during an insurrection in 2012 and 2013, denied it was involved in the fighting.

Since the M23's defeat in 2013, there have been regional efforts to demobilize the group, but its leaders have complained about the slow pace at which a peace accord has been implemented.

In a statement, M23 president Bertrand Bisimwa said they had nothing to gain by seizing the villages.

"It is ill-advised to believe that our movement can engage in hostilities with the [army] at this time, when the partnership with the government is improving and all hopes are still alive," he said.

The new reports of M23 fighting came less than a week after a major raid by a previously unknown armed group on the South Kivu city of Bukavu.

The CPCA-A64 militia (standing for the Coalition of Congolese Patriots for the Application of Article 64) first tried to attack a military base and then the city center, according a regional military commander.

Numerous armed groups have been active in South Kivu province for the past quarter of a century, but the provincial capital Bukavu has not seen such an attack in years.

The army said it had brought the fighting under control, killing six militiamen and capturing 36 others. Three soldiers were killed in the fighting.

"We all live with great fear in our stomachs," street vendor Amos Bisimwa said in Bukavu after the raid. "Nobody knows what the next night will be like, let alone whether they'll survive it."

The two attacks barely caused a blip on the radar of the international media. But they signal the slow flare up of tensions in east of DR Congo.

They also highlight the inability of the government of President Felix Tshisekedi to control the security situation from Kinshasa, some 2,000 km (1,200 miles) away from Bukavu by road.

Around 5.2 million people, including 3 million children, had already been displaced by the decades-long conflict.

The continuing impact of Rwanda's genocide

The provinces of North and South Kivu, which border Burundi, Rwanda and Uganda to the east, were directly affected by Rwanda's 1994 genocide, which saw ethnic Tutsis and moderate Hutus slaughtered by the Hutu ethnic majority.

Hundreds of thousands of Rwandans sought refuge in the Kivu provinces, including many of the genocide's main perpetrators.

From there, Hutu fighters carried out attacks on Rwanda's Tutsi-led government as well as on Tutsis living in DR Congo.

The threat posed by the Democratic Forces for the Liberation of Rwanda (FDLR), as the Hutu fighters called themselves, was unsustainable for Rwanda.

In 1996, Rwanda invaded DR Congo (then known as Zaire). The invasion quickly escalated with other foreign troops joining, including Uganda and Burundi.

Known as the First Congo War, the fighting ended in May 1997 with the ousting of Congo's long-time dictator Sese Seko Mobutu.

He was replaced by Laurent Kabila and the FDLR fighters -- albeit severely decimated -- went deeper into hiding and new rebel groups emerged.

The United Nations mission in the Democratic Republic of the Congo (MONUC) was set up in 1999 and is still present in the region with around 15,000 soldiers under the name MONUSCO.

But even UN peacekeeping forces haven't been able to stop the conflict that is still smoldering today.

Over the decades, new rebel organizations entered the conflict, including the National Congress for the Defense of the People (CNDP) lead by former Congolese general Laurent Nkunda, who succeeded in bringing a large part of the Kivu region under his control from 2004 until his arrest in 2009.

Nkunda, a Congolese Tutsi, said his CNDP fighters would defend the Tutsi against attacks by the Hutu-dominated FDLR. He also accused Congo's government of supporting the FDLR -- or at least doing nothing to stop them.

Even after Nkunda's arrest and the CNDP's dissolution, Congo's military backed by UN peacekeeping troops, have been unable to prevent the formation of new rebel groups wanting to "liberate" eastern Congo.

These new groups include the CPCA-A64, responsible for last week's attacks on Bukavu.

Government fails to control the situation

Many of these armed groups say they want to restore order and bring peace to eastern Congo but it is difficult to know the fighters' true motivations.

While some groups are formed along ethnic lines, there are often no identifiable ideological or political goals.

Then there is Rwanda, which often takes matters into its own hand.

"What is happening here is a severe humiliation for us Congolese," Josue Walayi, a resident of Nyiragongo district in north Kivu, told DW.

President Felix Tshisekedi, who has lead the Democratic Republic of the Congo since January 2019, has so far failed to live up to his promise to improve security in the Kivu provinces.

"We have lost millions of Congolese. When will it end?" Congolese opposition politician Martin Fayulu recently said in an interview with DW.

Jean Noel Ba-Mweze, Wendy Bashi and Mude Eldorado contributed to this article, which was translated from German by Abu-Bakarr Jalloh.