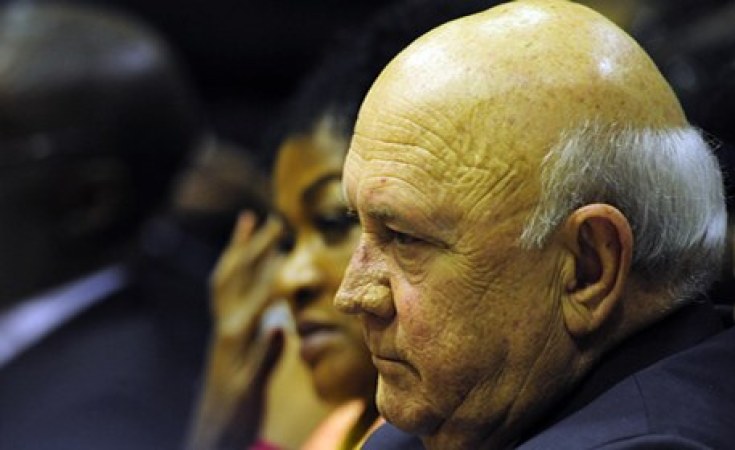 Many in South Africa believe FW de Klerk and others should have faced justice for the crimes committed during the apartheid era. The last white president died on Thursday at the age of 85 after a battle with cancer.

"There is ample evidence that till his dying day he was unwilling or incapable of acknowledging just how evil apartheid was and how much suffering it caused," is how Michael Lapsley remembered the former South African president, FW de Klerk, on Facebook.

Father Lapsley is an Anglican priest and former African National Congress (ANC) chaplain. His hands were blown off in a letter bomb attack by a South African hit squad in Zimbabwe in 1990.

"It is regrettable that he was never required to account for his role as chairperson of the State Security Council in the murders of the Craddock 4 and other death squad activity," Lapsy wrote.

The former South African President FW de Klerk died at his Cape Town home at the age of 85, his organization announced on Thursday.

"It is with the deepest sadness that the FW de Klerk Foundation must announce that former President FW de Klerk died peacefully at his home in Fresnaye earlier this morning following his struggle against mesothelioma cancer," the statement read.

"Mr De Klerk was 85 years old. He is survived by his wife Elita, his children Jan and Susan and his grandchildren."

De Klerk shared the 1993 Nobel Peace Prize with Nelson Mandela, with whom he worked to fully dismantle the apartheid regime.

Hours after he died, the foundation released a pre-recorded video message on its website, with de Klerk apologizing for the racist crimes of apartheid and calling for all South Africans to respect the constitution.

"I without qualification apologize for the pain and hurt and the indignity and the damage that apartheid has done to black, brown and Indians in South Africa," he said.

"Since the early '80s my views changed completely," de Klerk added. "It was as if I had a conversion and in my heart of hearts realized that apartheid was wrong. I realized we had arrived at a place that was morally unjustifiable."

De Klerk 'had no option'

"It was, for him, one last opportunity to come clean, to protect his legacy through manipulation," analyst Makhudu Sefara wrote in The Sunday Times newspaper.

"Even in the wake of his death, this must be rejected."

Political pundits in the country argue that even though de Klerk backed the transfer of power to the Black-majority ANC party, he cannot atone for the huge amount of harm he did as one of the leading proponents of apartheid for several decades.

Many say he was responsible for gross human rights abuses and the imposition of the oppressive apartheid system.

"He had no choice and he did what he had to do and it was obviously long overdue," said one Cape Town resident.

"You could compare South Africa at the time to living in a pressure cooker. There was nowhere else to go. We had student uprisings, we had the international community crying out for [Mandela's] release, there were various sanctions against the country."

By the end of the 1980s, de Klerk was facing determined opposition within South Africa and sanctions were starting to bite. The South African army had already retreated from Angola, and the Nationalist Party had finally agreed to Namibian independence.

"It was a practical decision rather than a moral one to end apartheid, and seek a political settlement with the African National Congress (ANC). I don't think there was any real remorse on his part," according to analyst Graham Hopwood.

"Much more than words, what FW de Klerk did was change what was wrong," Dave Steward, the chairman emeritus of the FW de Klerk Foundation, told DW. "It is easy to apologize."

Another Cape Town resident said "[de Klerk] used to be part of the [apartheid] government, but he brought South Africa back into normality, where everybody had a say in the country with Mandela."

The Nelson Mandela Foundation expressed sadness at de Klerk's passing and offered its condolences to his family.

"De Klerk will forever be linked to Nelson Mandela in the annals of South African history. As head of state, he oversaw the release of Madiba from prison on 11 February 1990 ... Over the years we worked productively with him and the De Klerk Foundation on a number of projects," the foundation said in a statement.

"De Klerk's legacy is a big one. It is also an uneven one, something South Africans are called to reckon with in this moment," the statement concluded.

FW de Klerk, the Last Apartheid President, Was Driven By Pragmatism, Not Idealism