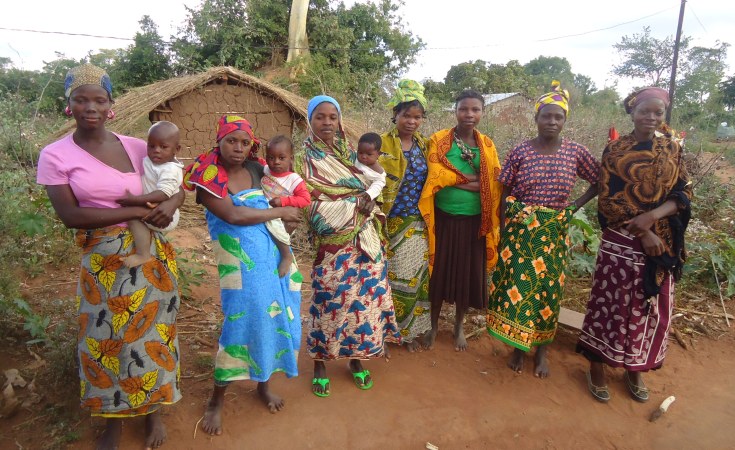 Diksha41/Wikimedia Commons
Women farmers near a cashew farm in Nambiza Village in the Nampula province of Mozambique.
African Arguments
analysis By Tavares Cebola

On 15 October, Alcinda Zimba, 50, gathered with fellow female farmers in the southern Mozambican village of Marracuene. The smallholders, all members of the country's largest farmers' union, União Nacional de Camponeses (UNAC), had come together to celebrate International Day of Rural Women. But they also had much else to discuss.

Over the past 18 months, the COVID-19 pandemic has severely disrupted their livelihoods. When lockdowns came into force last year, the shops, restaurants and schools that usually bought the farmers' produce closed down. Some have since re-opened, but many have not. Producers have had to adapt.

"We don't sell as much as we used to, but at least we can reach some people," says Zimba. "Last week I was contacted via WhatsApp and sent an order to Maputo."

Zimba says she now mostly sells to individuals. The challenges, however, have not been limited to selling produce but also buying items such as seeds, tools and fertiliser.

"When borders closed, especially the one with South Africa in the south, agriculture inputs' prices rose and it made things a lot more difficult for small farmers," says Edson Mussa, a project coordinator with Oxfam working in northern Mozambique. "That means farmers earn less money and that affects their household income."

According to a study by the UN's Food and Agriculture Organisation (FAO), 76% of the households in Mozambique experienced moderate to severe food insecurity at the height of the pandemic.

In the face of these difficulties, farmers like Zimba have had to lean on each other. Among other things, agricultural associations have swapped inputs or pooled money to support one another.

"We exchange seeds," says Rebeca Mabui, 56, a farmer from Manhiça. "We sell to our fellow farmers. We're finding ways to recover. You share what you have."

Even before COVID-19, small-scale farmers - who make up the majority of Mozambique's agricultural sector - were facing serious challenges.

In 2017, a militant group affiliated with the so-called Islamic State started conducting attacks in the northern region of Cabo Delgado. The ongoing conflict has uprooted hundreds of thousands of people.

At the same time, Mozambique is one of the country's most vulnerable to the climate crisis and has faced a series of extreme weather events. In 2019, Cyclone Idai hit central Mozambique and Cyclone Kenneth devastated the north. Thousands died and hundreds of thousands more were displaced. This January, Cyclone Eloise caused further damage. Floods and droughts have become more frequent.

"At some point last year, with floods and COVID-19, we were not able to feed ourselves and our children," says Rita Nhabanga, 54, a farmer in southern Mozambique. "Everything was destroyed in our farms and we relied on help from the church."

Farmers have also had to adapt to the challenge of climate change in innovative ways, including by shifting their sowing and harvesting patterns.

"We transplant strawberry plants in May rather than March or April as we used to do," explains Zimba. "I saw my fellow farmers who did transplant back in March not getting the same results as I did."

In Manhiça, farmers are turning to agroecological approaches that they say their ancestors used. Mabui says she now covers plants with grass to protect them, produces and stores her own seeds, and uses natural rather than synthetic fertilisers.

"We were doing it but didn't know the name agroecology," she says. "We have healthy food."

"Not as bad as feared"

It is largely thanks to farmers adapting and collaborating therefore that the damage caused by continued shocks has not been as extreme as many predicted.

"Agriculture has been resilient to the impacts of COVID-19 and had a dynamic contribution to economic growth," says Hernani Coelho da Silva, the FAO country representative. "This proves the reasoning we had that, in countries with the demographics and a structure like Mozambique, investments to address poverty should be directed to rural areas and the agricultural sector."

Back at the celebration of International Day of Rural Women, farmers exhibit their produce while others harvest food from the backyard garden of the union's branch. They face countless challenges, but say they will persevere in agriculture.

As Isidro Macaringue, an advocacy officer at UNAC, says: "Even though they had to work isolated from others or work in smaller groups because of COVID-19, farmers did not stop farming."

This article is part of On Food Security & COVID-19, a special series in partnership with OXFAM.

Tavares Cebola is a freelance writer based in Maputo, Mozambique.