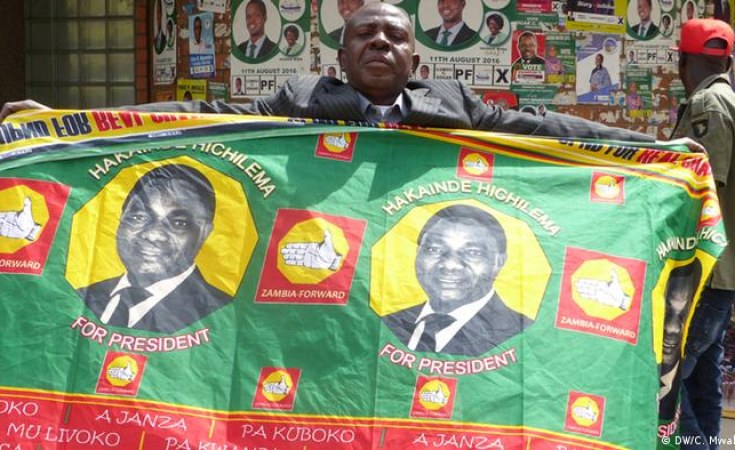 Nearly 100 days after Zambian President Hakainde Hichilema took power in August, he has been making advances in press freedom, curbing violence, and trying to unravel the complexities of the economic crisis that has touched every Zambian. Laura Miti, veteran civil society leader in Zambia and executive director for the Alliance for Community Action (ACA) in Lusaka spoke to RFI on the sidelines of the Africa-France summit in Montpellier last month.

Q: It's been nearly 100 days since President Hakainde Hichilema took the reins. What's the overall reaction in Zambia, now that he has the top job?

LM: A little heady. I think Zambians have discovered their new freedoms, so I think he's not going to have much of a honeymoon. What most people wanted was a return to law and order. For example, one of the reasons that made [former ruling party] Patriotic Front lose was the violent cadres--what we call young people on the street that terrorized and were harassing ordinary citizens. He has managed to sort that out. Soon after the win, young people from Hichilema's United Party for National Development (UPND) thought it was their turn to make a bit of money and harass people, and I think he's come down very strongly on that, which is very good.

There's the big question of corruption of the last regime that is hanging over our heads. Most citizens just want to see a wholesale arrest of people, but he has insisted that it has to be done in an orderly fashion after an investigation. That is causing a bit of unhappiness. People want to see answers because of the scale of the corruption. I'm hoping that he'll sort it out. But the big, big issue is the economy, the economy, the economy. Prices are high, there's extreme high poverty, youth unemployment as well. And as you know, it was the young people that turned out en masse to vote him into office, so they've got very high expectations, and we're hoping something can be done for them, both in terms of education as well as jobs.

Q: Civil society was quashed under Lungu. How do they see it? Are they cautiously optimistic or is this a really big change?

LM: It feels like a really big change, because already we can do work that we couldn't do before. You can go into the provinces, hold your meeting without worrying about the police, worrying about cadres. But what we want is for this democracy to be entrenched. We don't ever want to go back to depending on the goodwill of the president, we want laws changed. The public order act, the issues with the constitution, access to information. I think those three are huge for civil society.

And I'd like very early on to see movement on repealing bad laws and passing new ones. Zambia changes presidents quite regularly. Who says that we won't get another one who takes us backwards. What we need is not to depend on the fact that maybe President Hichilema comes across like a democrat, but that out laws and constitution must guarantee that we never go back to where we were with [former president Edgar] Lungu.

Q: Almost immediately after the election Hichilema re-instituted media houses and TV stations. Civil society sees this as a positive thing, but is this enough right now?

LM: It's a good start. Those media houses were closed for no reason other than they gave voice to the opposition and civil society. So we're hoping that this newly-opened space for media is entrenched. That's why we want access to information and legislation for example, so that we're not getting information from under the table like we were doing. The runaway corruption that was happening in Zambia was just because you can't ask simple questions. We need laws to be passed.

Q: In terms of corruption, Zambians are just thinking about buying staple foods. Is corruption a big issue for Zambians right now?

LM: Yes, it is a big issue. It's the grand scale corruption that is worrying civil society. Of course, there are two parts of Zambia, the more informed Zambia and the people who just want food on their table. That's understood. But in civil society, we want to know exactly how this corruption happened, what was the extent of it, what do we owe China, for example. Where did the debt that we borrowed actually go? It's a complex situation. I don't envy President Hichilema and his cabinet, because the expectations are really high, and the chances of disappointing people also are very high. But like everybody says, we hope he grabs those low-hanging fruit.

It is making sure that corruption stops going forward and is addressed historically. It's a system that's broken down. He's got to mend that system and ensure that doesn't happen. Already he seems to be showing the right signs--travel was one of the huge ways in which our resources were wasted in Zambia. So his last trip to the UN was a small delegation [2 people]. He flew commercially. Maybe the fact that he is a wealthy person shows that he doesn't get excited about these things. We hope that's how it's going to be.

Q: How does Zambian civil society see the recent meetings the president has had with the International Montetary Fund (IMF)?

LM:Civil society is divided on the IMF. Most people are fearful about the austerity measures that come with the IMF. On the other hand, much of our debt restructruring is going to depend on having an IMF deal of some sort. We're hoping that something will happen that doesn't hurt Zambians too much, because ordinary Zambians have already had it very, very difficult.

We need to have medecines in hospitals, we need to have books in schools. Unless something happens for the ordinary citizens, unless they can see that their vote improved their lives, I fear that the sense of Zambian disillusionment is going to hurt Zambian democracy. Very few people saw these votes coming, the massive turnout, the resolute decision--there has to be a result for that. It's what President Hichilema calls dividends of democracy. Because if it just ends up with people still poor, maybe even poorer, I feel going forward, especially the young people, will not believe in democracy.

A Peek Into Budgetary Allocations for Economic Affairs