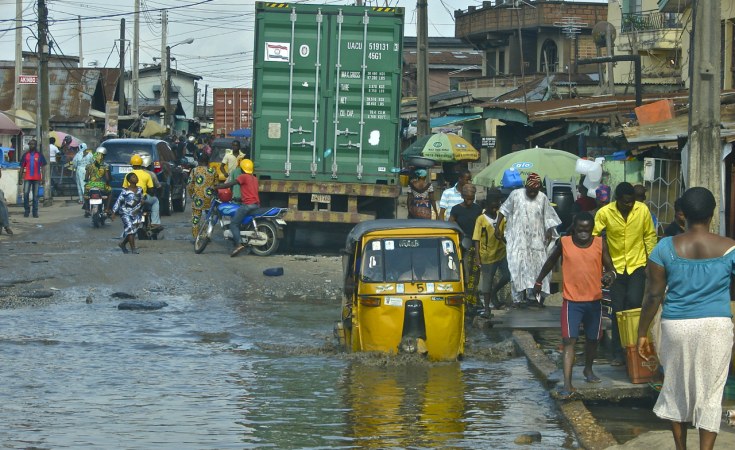 Bart Fouche/African Arguments
An estimated two hundred people have died and 600,000 have been displaced due to floods in Nigeria this year.
Thomson Reuters Foundation (London)
By Alister Doyle

Mobile "slamdam" flood barriers that look like huge blue snakes are among promising technologies to help African nations cope with flash floods linked to climate change, according to the African Development Bank.

Rich governments at the COP26 U.N. summit in Glasgow - meant to end on Friday but likely to run over time - are under pressure to step up climate finance after failing to honour a pledge to mobilise $100 billion a year from 2020 to help developing nations curb emissions and adapt to a warming planet.

More climate finance, after tens of billions of dollars in shortfalls, could unlock wider use of innovative technologies like the portable Dutch dams made of synthetic rubber tubes, or recycling plastic waste into blocks to build homes in Senegal.

With worsening climate change, "there will be a never-ending flow of projects, especially for adaptation," said Gareth Phillips, manager of climate and environmental finance at the African Development Bank (AfDB), who is working with Dutch firm SLAMdam to attract investors.

"The fact that we've fallen short of the $100-billion target means we have not financed as many projects as we'd like," Phillips said at COP26.

African nations at the Glasgow talks are seeking much bigger amounts of finance to bolster their economies against heatwaves, droughts, storms and rising seas.

The slamdams, already in use in the Netherlands, cost 1,350 euros ($1,546) for a 5-metre section weighing about 30 kg, which can be folded up into a box that two people can carry, said Omar Saleh, managing director of Zephyr Consulting which is promoting the portable dams at the COP26 summit.

A first batch of slamdams are now on the way to Nigeria for pilot tests, he said. Another project will follow in Burundi and the company is looking around the world for projects.

The tubes can be unrolled on the ground and pumped full of water to form a sausage-like dam about 1 metre (3.3 ft) tall.

The sections can be joined up and extended, like a snake, to cover kilometres when needed to protect homes, roads or farms from local floods.

SLAMdam says at least 20 people working for 10 hours would be needed to build a 100-metre-long emergency dam with sandbags - but just two people with high-capacity water pumps could put up a 100-metre slamdam in two hours.

After flooding subsides, the water in the dam's tubes can be kept for irrigation in the dry season, or it can be emptied, packed up and moved elsewhere.

Ever more precise satellite maps, weather forecasts and data about infrastructure and people living in a particular area will enable scientists to decide exactly where to deploy dams.

The AfDB is working with companies, including SLAMdam, to design an "Adaptation Benefits Mechanism" (ABM), which tries to quantify how adaptation projects can help local communities as a step to raising finance, Phillips said.

Other ABM projects include working out the economic benefits of planting mangroves to protect coasts or more efficient drip irrigation to help farmers cope with unreliable rainfall, the AfDB says.

Among the technologies under the ABM is a plan to collect plastic waste in the Senegalese town of Kaolack and then recycle it into building materials, with technology developed by Colombian company Conceptos Plasticos.

"You can shred the plastic, compact it and mould it into a block, like a Lego brick and use it to build houses," said Sergi Cuadrat, chief strategy and innovation officer at Allcot Group, which is developing the project with the Kaolack municipality.