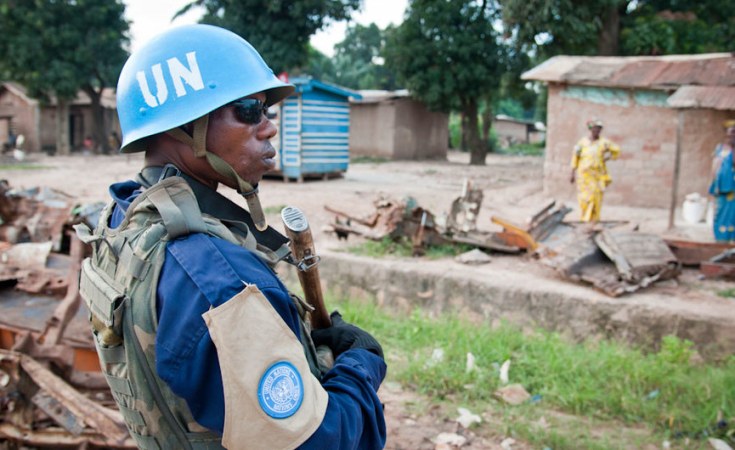 Children in the Central African Republic (CAR) have suffered a spike in grave violations since the end of 2020, according to a new UN report on the situation in the country, issued on Monday.

The report on children and armed conflict in CAR highlighted that between 1 July 2019 and 30 June 2021, 1,280 children suffered one or more grave violations, with girls accounting for more than 40 per cent of all victims.

While most were committed by armed groups, five per cent were attributed to the national armed forces, FACA.

"The security situation in the Central African Republic has rapidly worsened in recent months and children are paying a high price for these renewed hostilities", said Virginia Gamba, UN Special Representative for Children and Armed Conflict.

"I call on the signatories of the Political Agreement to uphold their commitments including those pertaining to children and urgently put in place concrete measures to protect children from harm and prevent further violations".

With some 845 children affected, their recruitment and use were the most prominent of violations.

Following was rape and other forms of sexual violence, where at least 249 girls fell victim, although the actual scope is likely much worse as the crime is vastly underreported, usually for fear of reprisal, stigma, lack of accountability and support for victims and survivors.

The denial of humanitarian access was the third most verified violation, with 226 incidents.

"The situation is becoming increasingly difficult for humanitarian actors, who are struggling and facing growing dangers to reach the most vulnerable ones, including children, in dire need of life-saving assistance", said Ms. Gamba.

As of 30 June 2021, 2.8 million people have needed humanitarian assistance and over 717,000 had been internally displaced in the country, based on figures from the UN humanitarian aid office, OCHA.

Violence in the country continues to take a heavy toll on children.

The report reveals that 155 boys and girls were verified killed or maimed, most by crossfire between parties to the conflict; and 116 were abducted, more than half of them girls.

Attacks on schools and hospitals are also concerning, as is the impact of conflict and COVID on education and health systems as well as the growing use of military control of schools.

"These incidents deprived children of attending classes or forced them to enrol in different schools", explained the Special Representative.

"I urge all parties to vacate all schools and hospitals that continue to be used, to respect the civilian character of these facilities and to put in place swift and effective measures to prevent this practice in line with the commitment made to the Safe School Declaration that the country has endorsed", she added.

Some progress has been made, including strengthened national legal framework through the promulgation of the 2020 Child Protection Code - with provisions that criminalize the six grave violations of killing and maiming of children; recruiting or using them in armed groups; denial of humanitarian access for children; their abduction; attacks on schools or hospitals; and rape or other grave sexual violence.

Also, UN advocacy with armed groups on the ground has led to the release of 653 children and an additional 130 who have been separated since last June.

Despite this, impunity remains high.

The Special Representative urged the authorities to bring perpetrators to justice and to make full use of the recently promulgated Child Protection Code.

"As countries around the world continue to focus on their response to the pandemic and rollout vaccination programmes, we need to stand ready to respond to the urgent needs of children, particularly in the regions where the situation is the most critical", said Ms. Gamba, calling on the Government and parties to the conflict to develop a national strategy to prevent grave violations against children.