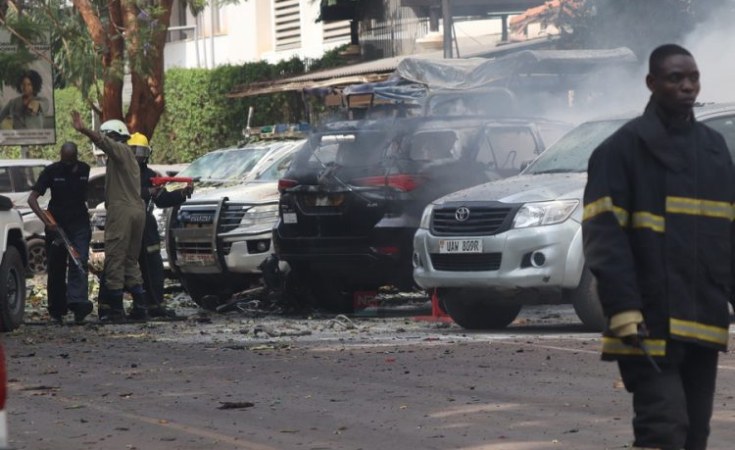 Charles Odongtho/Nile Post
Scene of the bomb blast at Jubilee building in Kampala.
The East African (Nairobi)
By Aggrey Mutambo

Regional leaders have condemned the terror attacks in Uganda's capital Kampala even as they vowed support to tame the vice.

African Union Commission Chairperson Moussa Faki Mahamat condemned the incident in which three people were killed and more than 30 injured, and offered the support of the continental body in securing the region.

Faki said the AU "stands in total solidarity with the people and the government of Uganda" as it seeks answers on the incidents.

Dr Workneh Gebeyehu, the Executive Secretary of the regional bloc, Intergovernmental Authority on Development (IGAD), said the group of seven member states will support Uganda "in its fight against terrorism within principles of rule of law and respect to human rights.

Two separate, but suspected to be related, incidents on Tuesday saw suicide bombers detonate bombs themselves in two streets in Kampala.

"The United States condemns in the strongest terms today's terrorist attack in central Kampala," said a statement from the US Mission in Uganda, which also condoled with families who had lost loved ones.

"The United States support for Uganda people is unwavering as we work toward our shared goal of a secure, democratic and prosperous Uganda."

By last evening, police had not identified the bombers by name but Spokesman Fred Enanga told the media they were suspected allies of the proscribed Allied Democratic Forces (ADF) whose leader Jamil Mukulu is in a Ugandan jail.

"It clearly shows that the ADF-linked radicalised groups still have a desire to carry out lethal attacks on soft targets, with suicide attackers and improvised explosive devices," Mr Enanga told a press briefing in Kampala.

Police said there could be more planned attacks.

One device was found near the Central Police Station, where the first bomb was detonated earlier in the morning, while other devices were found in the market. All the bombs were destroyed by responding police.

Another fourth suspected bomber was arrested in Bwaise, a township in Kampala.

Previous Story
Bombings - We're Coming For You, Museveni Says As Islamic State Claims Responsibility
Next Story
'Parliament Was the Target of the Terrorists,' Say Security Sources

'Parliament Was the Target of the Terrorists,' Say Security Sources