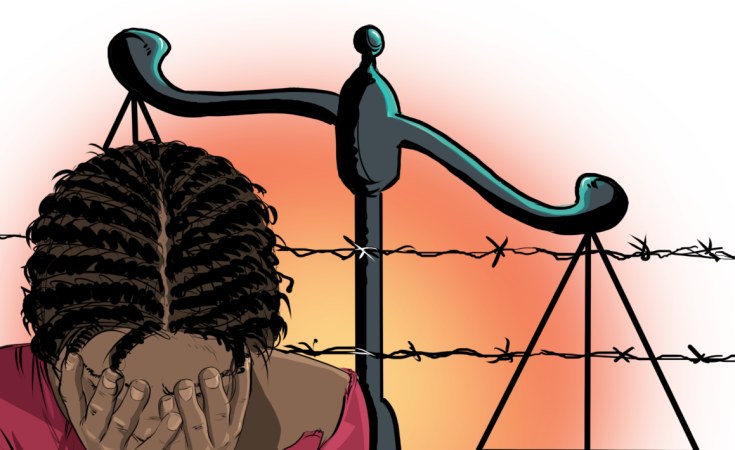 Despite the Nigerian authorities' declaration of a "state of emergency" on sexual and gender-based violence, rape persists at crisis levels with most survivors denied justice, rapists avoiding prosecution, and hundreds of cases of rape going unreported due to pervasive corruption, stigma, and victim-blaming, Amnesty International said in a report published today.

The report, Nigeria: A Harrowing Journey; Access To Justice for Women and Girls Survivors of Rape   covers harrowing cases of sexual violence against women and girls, including a six-year-old and an 11-year-old who were attacked so viciously they died. The report reveals how harmful cultural stereotypes, failures of law enforcement to investigate rape cases, toxic misogyny and insufficient support for survivors, have created a culture of silence and impunity which continues to fail hundreds of women and girls every year.

Concrete actions have not been taken to tackle the rape crisis in Nigeria with the seriousness it deserves. Women and girls continue to be failed by a system that makes it increasingly difficult for survivors to get justice, while allowing perpetrators to get away with gross human rights violations.

"The fear of not being believed, or even being blamed for being raped, is creating a dangerous culture of silence that prevents survivors from seeking justice. It is unacceptable that survivors of rape and other forms of gender-based violence face such a torturous ordeal to get justice, which only adds to their pain. The 'state of emergency' has proven to be an empty declaration, which has so far done nothing to protect women and girls in Nigeria."

The report is based on research carried out between March 2020 and August 2021, including interviews with 14 women and girl survivors of rape aged between 12 and 42. Amnesty International researchers also interviewed seven parents of child survivors. Interviews were conducted in Abuja, Lagos, Kano, Sokoto and Bauchi states.

Rape continues to be one of the most prevalent human rights violations in Nigeria.

Following the lockdown imposed to tackle the spread of Covid-19 in 2020, there was an upsurge in cases of rape. In June 2020, Nigerian police said they had recorded 717 incidents of rape between January and May last year. In April 2020, Nigeria's Minister of Women Affairs Pauline Tallen said at least 3,600 cases of rape were recorded during the lockdown, while the National Human Rights Commission (NHRC) received 11,200 reported cases of rape over the whole of 2020.

As reports of rape escalated across Nigeria, state governors declared a "state of emergency" on rape and gender-based violence in June 2020. They also promised to set up a sex offenders register. But over a year since their declaration, nothing has changed, as more cases of rape have been reported.

One victim, Vera Uwaila Omosuwa, a 22-year-old microbiology student, was raped and brutally assaulted in 2020 in a church near her home in Benin, Edo state, and died a couple of days later from her injuries. Hamira, a five-year-old, was drugged and raped by her neighbour in April 2020. Her injuries were so bad she could no longer control her bladder.

Barakat Bello, an 18-year-old student, was raped during a robbery in her home in Ibadan, Oyo state. She was butchered with machetes by her rapists and died on 1 June 2020. Favour Okechukwu, an 11-year-old girl, was gang-raped to death in Ejigbo, Lagos state. A 70-year-old woman was raped in Ogun state. In May 2021, a six-year-old girl was raped to death in Kaduna state.

"The Covid-19 pandemic only exposed what has been going on for so long. Not only are women and girls being raped in Nigeria, but when they are brave enough to come forward they are being dismissed by police officers as liars and attention-seekers – slurs which inflict further injury," said Osai Ojigho.

Despite Nigeria's international human rights obligation to enact, implement and monitor legislations addressing all forms of violence against women, women and girls continue to face discrimination in law and practice.

Survivors and NGOs interviewed for this research said stigma and victim-blaming are key factors hindering the reporting of rape. Survivors shared distressing experiences of both, and told Amnesty International that they did not report due to fear of being disbelieved and blamed. Children, who are increasingly becoming targets of sexual violence, face particular challenges in reporting these crimes because of a lack of reporting process that is child-friendly.

Some survivors said they were discouraged from seeking justice because of the toxic attitude of police officers towards gender-based violence, which manifested in humiliating lines of questioning and victim-blaming. In addition, decrepit police stations often lack the space for privacy that survivors need to make their statements.

Onyinye, a 14-year-old, was raped by her neighbour when she was sent by her mother to help fix his phone. When Onyineye and her mother went to the police station to report the crime, not only did a female police officer slap the girl and pull her ear, Onyinye's mother was also scolded for not giving her daughter a 'good upbringing'.

Activists and lawyers have decried the poor quality of police investigations into rape cases. In some cases, perpetrators bribe the police not to investigate their crimes. The police have also advised survivors and perpetrators to settle cases outside the scope of the criminal justice system, which only perpetuates violations of women's human rights and impunity for rape.

Time to act is now

Amnesty International is calling on Nigerian authorities to act now to protect women and girls from rampant sexual violence. All reported cases of rape must be thoroughly, promptly, and impartially investigated and perpetrators must be prosecuted, and if convicted, sentenced with appropriate penalties. Existing discriminatory laws must be repealed and followed up with a concrete implementation and enforcement framework.

Nigerian police must provide all necessary support to survivors and act in line with their code of conduct, by providing safe process of seeking justice for survivors to report rape and other gender-based violence and get justice.

Courts must ensure that cases of sexual violence are fairly and promptly prosecuted. Any backlog in rape cases that may create unacceptable barriers for rape survivors' access to justice must be addressed.

Nigeria must protect women and girls by ensuring that perpetrators of rape face justice and survivors get protection and psychosocial and medical support. The tide of sexual impunity against women and girls must be turned now.

Amnesty International's researchers interviewed 14 women and girls survivors of rape between the ages of 12 to 42 years. Researchers also interviewed 7 parents of survivors who are children. Interviews were conducted in person, as well as through phone and video calls.

The Ordeals of Rape Victims in a Nigerian University