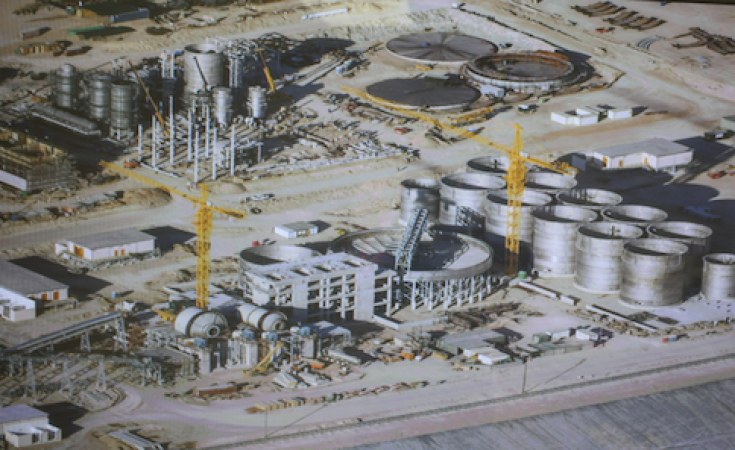 The Namibian
Uranium mining and processing in Namibia (file photo).
The Namibian (Windhoek)
By Matthew Dlamini

The Ministry of Agriculture and Land Reform has cancelled two prospecting permits once issued to, Headspring Investments that was seeking to find uranium in the Stampriet artesian basin.

The company was on a mission to drill 37 boreholes for uranium prospecting, a move that had angered southern farmers that depend on the basin for fresh water for their fresh produce.

In a letter dated 9 November 2021, agriculture executive director Percy Misika told the company that the government was cancelling the deal because it had identified gross negligence.

"Based on the gross violations and non-compliance of permit conditions, Permit No 11561 and Permit No 11562 are hereby withdrawn with immediate effect and no further drilling is permitted," wrote Misika.

The executive director further demanded that the two permits be returned to the ministry for cancellation.

Misika said the ministry carried out a site visit last month and was "extremely concerned about Headspring Investment (Pvt) Ltd's non-compliance with conditions of permits no. 11561 and no. 11562, among others".

He said specifically the boreholes for hydro-geological study purposes are actually being drilled in a pattern mimicking that of the in-situ leaching technique proposed in the background information prepared by the consultant hired to carry out the environmental impact assessment process for that.

"The exploration boreholes are not being drilled as per permit conditions where drilling activities require that the Kalahari aquifer be cased off and grouted before drilling into the Auob aquifer," Misika added.

"Some of the exploration boreholes were left open for long periods allowing the mixing to last even longer. Forming pathways for the contaminants to enter the subsurface and unsealed boreholes are potential lock falls for livestock or wildlife," he said.

The committee, made up of concerned farmers, and other stakeholders including lodge owners who depend on the aquifer, are opposed to uranium prospecting in the area because of the potentially disastrous impacts that in-situ leaching of uranium in the underground aquifers of the huge Stampriet artesian basin could have for this arid region of Namibia's south-eastern Kalahari Desert and neighbouring countries of Botswana and South Africa.

The chairperson of the committee, Divan Opperman, in a media statement on Monday, said while they appreciate the ministry of agriculture for retracting two drilling permits granted to Headspring Investments because of non-compliance with permit conditions, only drilling permits have been retracted, not the EPLs issued by the Ministry of Mines and Energy in their totality.

"We, however, wish to express continued concern over all the EPLs issued to Headspring Investments, its associate companies and, in fact, over all EPLs issued for uranium prospecting across the Stampriet artesian basin.

"Collectively, these cover a swath approximately 50km wide and 500km long along the northern and western margins of the basin where the recharge of the aquifers takes place, a total area of 2,7 million hectares," said Opperman.

He added that there are more than 30 EPLs across the Stampriet aquifer, registered under various names, for uranium prospecting.

Agriculture spokesperson Jona Musheko said it would be difficult for the prospecting company to rectify some of the damage they caused and unless they come and explain themselves to the ministry, they will not be allowed to do any more work.

"We will put new conditions for them to fulfil if they are to resume work there," Musheko said.

Efforts to get comment from Headspring Investments proved futile.