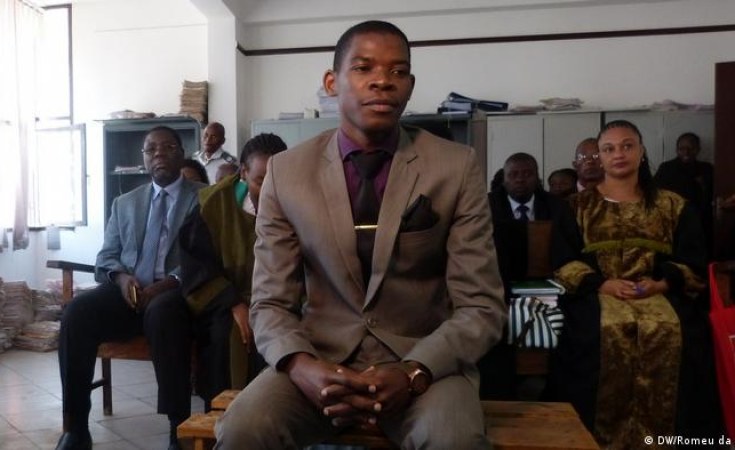 He shares the prestigious award given by the Committee to Protect Journalists with Belarusian correspondent Katsiaryna Barysevich, Anastasia Mejia from Guatemala, and Aye Chang Niang from Myanmar.

"It was a privilege for me as a Mozambican journalist. I couldn't believe it when I saw the announcement on the internet," Guente said, adding that the award will inspire others who are working in very dangerous and difficult environments.

"It is also a warning to the enemies of a free press that the world is watching those are doing their duty, which is reporting," Guente told DW in an exclusive interview.

"The press is the cornerstone of democracy. We believe that."

Guente's CanalMoz newspaper is credited with revealing corruption cases involving top government officials and prominent business people. But, unfortunately, his journalistic work made him a target, and in August 2020, the newspaper offices in Mozambique's capital Maputo were torched.

"It was the most terrible moment of our lives as journalists, and also as citizens who believe in a free country, democracy, and freedom," Guente said. "We couldn't believe it, so we ran to the office and saw it with our own eyes; it was real."

Everything, including furniture, equipment to produce content, and the newspaper's archives, was reduced to ash on that fateful day. "What came to our minds was that the enemy of democracy, the enemy of press freedom, had reached unimaginable limits. Even in our worst moments, we couldn't believe it could come to this," Guente recalled.

That arson attack, however, did not deter him. The following day, Guente and his colleagues defiantly set up an "open-air newsroom" right outside the ruins of their torched media house.

"We didn't bow to these guys because if we did so, we would be telling the people that they [the suspects] were right. But they weren't. We believe in freedom and democracy and a free country," Guente stressed.

"Of course, we fear for our lives, but there are some things that we believe go beyond perceptions. It is also our duty as humans and citizens of this country."

Guente told CPJ in an interview after the incident that he believed the primary motive of the attack was to "shut down the paper because they know how relevant we are to democracy."

That was not the only attack Guente has had to endure. In 2019, unidentified assailants beat Guente and attempted to kidnap him.

One month before that attack, local officials had summoned Guente. According to CPJ, citing a local press freedom group, the attack may have occurred due to articles published by Canal de Mocambique that investigated the abduction of businesspeople by a crime syndicate allegedly linked to police. It also exposed the security contracts of multinationals operating in the gas-rich but volatile Cabo Delgado province. There was also alleged manipulation of a fuel marketing process.

After that investigation, the mineral resources and energy ministry suspended a fuel marketing deal, but authorities accused him of violating state secrecy and conspiracy against the state. They later released him due to lack of evidence but warned him that the prosecution could revisit those charges in the future.

"The media situation in Mozambique is worsening," Guente said. "Besides these physical attacks, there are also formal institution attacks that can come as laws and intimidation to journalists. There is a formal institution spewing hate speech against journalists." He gave an example of institutions giving inflammatory speeches against the press and said nothing was happening to them. "We have never seen this kind of environment before."

The graft case alleges that ProIndicus, Ematum, and Mam, three Mozambican state-owned companies, secretly borrowed €1.76 billion ($2.08 billion) between 2013 and 2014 from Credit Suisse, the Russian bank VTB, among others.

The funds were supposedly intended to be used to fund maritime surveillance, fishing, and shipyard projects. However, the debts were hidden from the public and the international community.

"I feel that we need training for our journalists to get more skills on how they can investigate things that we normally think are not big stories," Guente said. He said their newspaper is trying to get staff trained on those skills, but there was a need for more resources to empower the journalists because the job is essential.