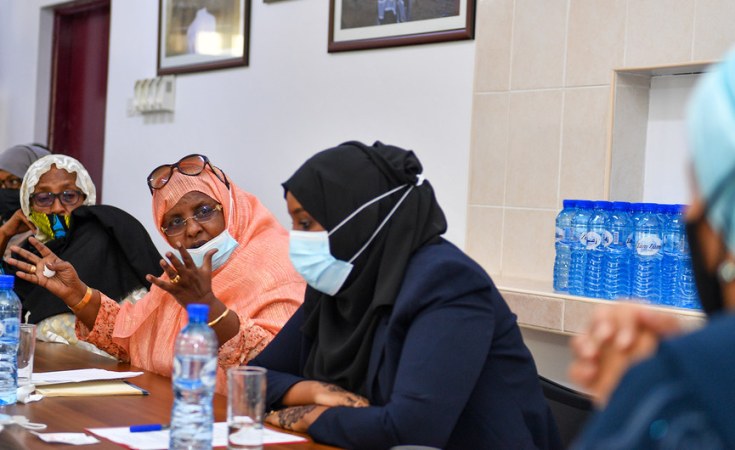 Somalia's federal electoral agency is urging all regional polls supervisors to ensure that at least 30 percent of seats in the Lower House go to women.

In a letter to state electoral teams, the federal agency also published a table showing the number of legislators each state will vote for, out of the total 275 MPs and the respective 30 percent women legislators to come out.

The country was due to launch indirect elections for the Lower House, also known as the House of the People, which is composed of 275 seats shared between the five federal states.

The tentative schedule showed voting should have begun by Tuesday this week. It didn't, but the programme also staggers the voting over several weeks until December 24.

The list showed that Puntland will vote for 37 legislative seats and expected to produce at least 11 women MPs, if the 30 percent quota is adhered to.

Next is Jubbaland, which will vote for 43 seats and produce 13 women parliamentarians, followed by South West, voting for 69 seats and expected to generate 21 women MPs.

Other electoral constituencies are Galmudug and Hirshabelle states, respectively voting for 37 and 38 seats with the expectation that each will choose 11 women MPs.

Delegates in Mogadishu representing Somaliland, the northwestern regions, will vote for 46 seats with a plan to produce 14 women legislators. And the Banadiri, a Mogadishu-based community that had been allocated five legislative seats, is to vote for at least one woman MP.

The general rule is that for each clan that votes for more than two MPs, one of them must be a woman to ensure female participation.

The Federal Electoral Implementation Team (FEIT) statement said, "All clans that are allocated with the election of MPs and the SEITs in each state or constituency are hereby urged to conduct the elections, bearing in mind the stated women quota to generate a minimum of 82 women legislators."

Somalia's Prime Minister Mohamed Hussein Roble on Monday travelled to Dusamareb town, the capital of Galmudug. Meeting with local State Electoral Implementation Teams (SEIT) and representatives of FEIT in the constituency, PM Roble reminded both about the task of generating a transparent and reliable electoral process.

"I hereby urge you to refrain from anything that contradicts the agreed electoral modalities," he told the teams in Galmudug, a message that will also apply to all other teams in the 11 constituencies.

It is notable that members of the National Consultative Forum, the top-most organ that oversees the clan-based indirect electoral process in Somalia and comprises PM Roble for the federal government, leaders of the five federal states and the mayor of Mogadishu, had agreed to the 11 constituencies, two towns in each of the states and the capital Mogadishu.

International Partners (IP), a grouping of organisations and countries that generally support Somalia's state rebuilding, has welcomed the conclusion of Somalia's Upper House elections as well as the NCF's virtual meeting on November 11, committing to conclude elections for the Lower House before the end of December.

Though appreciating the progress, IP, which includes multilateral bodies such as the United Nations, European Union, African Union, Intergovernmental Authority on Development (Igad), Organisation of Islamic Cooperation (OIC), and countries such as the US and the UK, expressed caution about delays in the Lower House elections.

"We remain deeply concerned about the extremely delayed election timeline and strongly urge the Somali leadership, at all levels of government, to swiftly re-commence and complete the electoral process for the House of the People seats," said a statement from IP indicated.

It added: "We also strongly urge Somali leaders and the State Election Implementation Teams, in line with the 17 September 2020 and 27 May 2021 agreements, to ensure that a minimum 30 per cent quota is reserved for women members of Parliament through a clear mechanism."

With the election of the last two senate seats by Galmudug parliament on November 13, Somalia has elected all 54 members of the Upper House, 15 of them women, a good achievement despite missing the targeted 18 seats.

All eyes are now on the election of 275 MPs to the Lower House, with 82 seats expected to go to women to ensure the 30 percent quota.

Ms Bilan Bile, a women's emancipation activist in Mogadishu, told the Nation that she had declared to her fellow clansmen and women her intention to run for a seat in a constituency in Beledweyne town in Hirshabelle state.

"We as women are struggling in a purely patriarchal society in which clan elders and a majority of the delegates who vote are men," she said.

"If I am lucky to be in the next parliament, I will push for legislation that favours women empowerment and political participation."