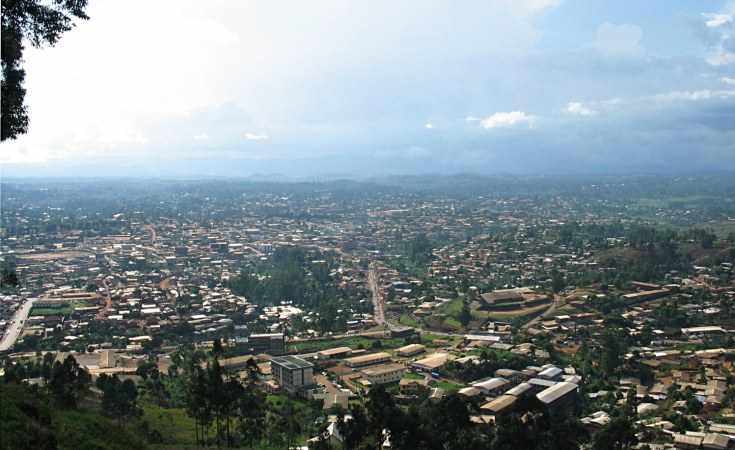 Cameroon's armed forces used excessive and lethal force against protesters in Bamenda, North-West region on November 12, 2021, Human Rights Watch said today. The protesters were calling for justice for the police killing that day of Brandy Tataw, an 8-year-old schoolgirl.

Soldiers, shooting live rounds from armored vehicles, injured at least seven men. The Cameroonian authorities should ensure that those responsible for the killing of Brandy Tataw and for excessive use of force against protesters are held accountable.

"The army's use of live ammunition on people protesting the death of a child raises a disturbing specter of a trigger-happy security force," said Ilaria Allegrozzi, senior Africa researcher at Human Rights Watch. "The authorities have an obligation to promptly investigate the use of force by soldiers during protests, and to send a strong message to their security forces that abuses will not go unpunished."

Martin Mbarga Nguele, the national security delegate general and Cameroonian police chief, said that Tataw was hit as she was walking down the street by a ricochet bullet a policeman had fired at a car that failed to stop at a police checkpoint. In a November 12 news release, Nguele announced that an investigation had been opened and that the policeman believed to have fired the shot had been arrested. The armed forces have yet to publicly address the use of live ammunition to disperse protesters or to acknowledge that protesters were injured.

Between November 12 and 16, Human Rights Watch interviewed by telephone 15 people, including three protesters, one man who was wounded by soldiers' fire, a relative of Tataw, two medical staff who treated six wounded protesters, and eight other Bamenda residents, including three who saw Tataw's dead body.

The killing of Tataw, who was on her way home from school, sparked protests on November 12 across Bamenda, Cameroon's North-West region, where there is a violent crisis between armed separatist groups and the national government. Hundreds of angry residents took to the streets, parading Tataw's body, and calling for justice. Two medical sources told Human Rights Watch that angry protesters had forcibly removed Tataw's body from the Prenatal, Maternal, and Infant (PMI) health center in Bamenda's Nkwen neighborhood and taken it to the Bamenda governor's office.

Protests continued in the afternoon in Bamenda's Mile 2 neighborhood. Witnesses said that soldiers came in at least two armored vehicles and dispersed protesters with live bullets. "They came with the intention to do harm," a human rights activist who was among the protesters said. "They fired indiscriminately at the crowd wounding several of us."

Media reported a police statement claiming that separatist fighters had infiltrated the protesting civilians. Human Rights Watch was unable to verify this assertion.

A nurse at PMI said that she treated six men with gunshot wounds: "The wounded started coming in at around 3:30 p.m., with various gunshot wounds, some in the arms, some in the legs, some in the back. They also had bruises and lacerations. We treated five and referred one, the most serious case with a gunshot in the neck, to the regional hospital."

A 28-year-old wounded protester told Human Rights Watch he did not go to the hospital out of fear that the military could arrest him there. "Soldiers started shooting and a bullet hit me in the right foot," he said. "I was too scared to go to the hospital so a traditional doctor in my neighborhood treated me. I am in hiding now. If the security forces find me, they'll arrest me. Other injured men are also in hiding."

Tataw's killing was the second time in less than a month that security forces' use of lethal force led to a child's death. On October 14, a gendarme killed 4-year-old Caro Louise Ndialle, who was in a vehicle on her way to school in Buea's Molyko neighborhood, South-West region. An angry mob responded to the killing by lynching the gendarme.

In a news release issued that day, Colonel Cyrille Serge Atonfack Guemo, the army spokesperson, said the driver of the vehicle Ndialle was traveling in had refused the gendarmes' order to stop at a checkpoint. "In an inappropriate reaction [... ] one of the gendarmes fired warning shots to immobilize the vehicle," the news release said, adding that "in the process" Caro Louise "was fatally shot in the head." Guemo also said that an investigation has been opened "to shed more light on and establish responsibilities" in this incident.

Residents of Bamenda and Buea repeatedly told Human Rights Watch that they have a pervasive fear of security forces' checkpoints, saying that gendarmes, policemen, and soldiers harass drivers and passengers asking for bribes, and often use force during routine road operations.

In a November 15 Twitter post, the American, Canadian, British, and Swiss ambassadors in Cameroon condemned attacks against civilians in the Anglophone regions, particularly on children and students.

"Cameroonian authorities should thoroughly investigate the killing of the schoolgirl in Bamenda, as well as the structural issues that made it more than a one off, especially at a time when education is under attack in the Anglophone regions," Allegrozzi said. "The incident a month ago highlights the extreme risk schoolchildren face not just from separatists, but from undisciplined and abusive security forces as well as the need for stronger and effective discipline and accountability within the security forces."