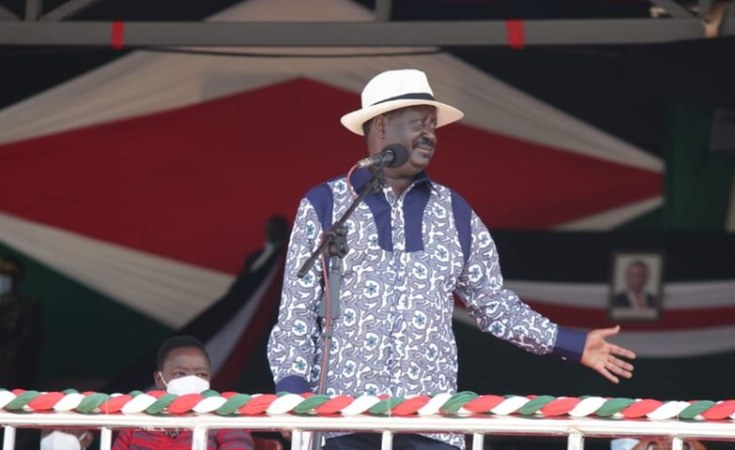 Poll ratings of ODM leader Raila Odinga are climbing ahead of the announcement of his candidature next month, a new opinion poll released by research firm Tifa shows.

However, Deputy President William Ruto is the candidate to beat in next year's election, according to the poll. It showed that Dr Ruto is the most popular presidential aspirant ahead of Mr Odinga, Amani National Congress leader Musalia Mudavadi, Wiper's Kalonzo Musyoka and Gideon Moi of Kanu, among others.

Dr Ruto, the poll shows, enjoys a national support of about 38 percent, while Mr Odinga stands at 23 per cent, with Mr Mudavadi coming in at number three with 2 per cent. Both Mr Musyoka and Mr Moi have 1 per cent support.

The DP, however, suffered a decline in his national support after his figures fell by about one percentage point, from 39 per cent in June - when Tifa conducted its earlier opinion poll - to 38 per cent in November.

This is despite the many campaigns that he has held across the country and the numerous defectors that UDA has received from other political parties in the past months.

Mr Odinga, on the other hand, gained more support in the months leading to the opinion poll, as his popularity rose from about eight per cent in June, to 23 per cent in November.

The jump saw Mr Odinga narrow his gap with Dr Ruto by two-thirds, a feat the pollster argues could be tied to the ODM leader's recent campaigns across the country, and his perceived candidature set to be unveiled next month in Nairobi.

"First, the DP's popularity as a likely (if not certain) presidential candidate, while clearly far greater than that of his closest potential rival, Mr Odinga, has not significantly increased over the last 16 months, notwithstanding his almost incessant campaign like activities as well as the more recent string of defections of various elected leaders from other parties," says Tifa.

"As for Mr Odinga, his initial standing of less than half that of Dr Ruto as recorded in Tifa's survey of June 2020 has more than recovered following the decline he experienced at the end of 2020 and then earlier this year in June, when it fell to just 8 per cent, now standing at about two thirds of the DP's candidate-popularity of 24 per cent vs 38 per cent." But Dr Ruto faces an even bigger challenge in his quest for the presidency, which Tifa says could be complicated by a possible alliance between Mr Odinga and the other aspirants.

Such an alliance, Tifa says, could redesign the campaigns that are currently dominated by Dr Ruto, as his opponents seek to find ways to challenge and counter him, thereby diminishing his chances of winning in popularity ahead of the elections.

"The question remains, what, if anything, can the DP do to further increase his electoral attractiveness, even as his various opponents seek to design a strategy that would both diminish his profile while avoiding any cantankerous fall-out among themselves, given that aside from Mr Odinga, a number of them have their own burning presidential ambitions? Subsequent Tifa surveys should be able to shed light on all these, among various other important issues," Tifa says.

The poll says that Dr Ruto's fortunes could be tied to his recently launched UDA party, which has been growing in popularity and support across the country, compared to its closest rival ODM and the ruling Jubilee party.

"UDA for instance, is the most popular political outfit across the country with a national support of about 30 per cent, followed by ODM with 16 per cent and the Jubilee party at about five per cent," says Tifa in the opinion poll conducted between November 7 and 13.

Prof Amukowa Anangwe of the University of Dodoma said that while it was still too early to predict the outcome of the elections, the poll could point to some of the likely scenarios moving forward.

"The poll shows that the 2022 presidential race will be a tight one between Dr Ruto and Mr Odinga but there are also other credible candidates, only time will tell when elections come. There are many Kenyans who are yet to make their minds. Let Kenyans view these polls as something taken with a pinch of salt," said Prof Anangwe

For Mr Dismus Mokua, a political risk analyst, the findings are an indication of the long held views that politics in Kenya are based around personalities and not political parties, adding that the results could also mean that both Dr Ruto and Mr Odinga still have much ground to cover.