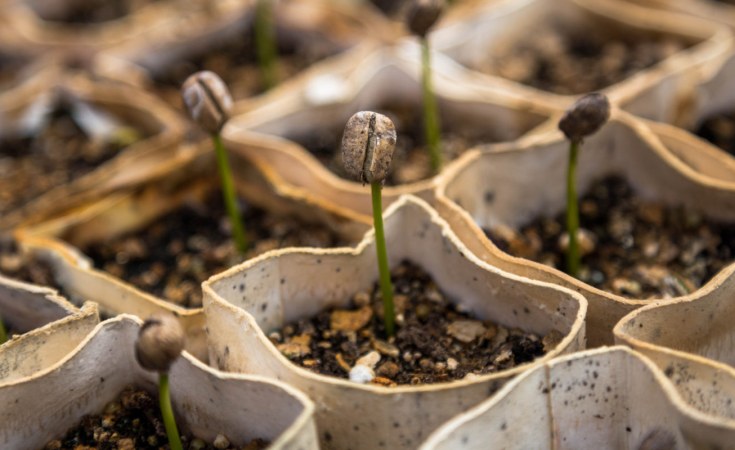 Large mineral deposits in Sierra Leone have often caused tensions between farming communities and miners, especially in the rural south. But a group of women have become ambassadors for peace.

The mid-mornings of Matagelema village in south Sierra Leone often find the local women ankle-deep inside large rice fields. If they are not planting, they are weeding their crop. Otherwise, they build or repair bunds and canals that the World Food Programme (WFP) and the Government are assisting them to set up to make simple irrigation schemes that will boost their yields.

Mamie Achion, the vibrant coordinator of the women says, "We were forced to abandon our initial farms because of conflict with miners. They were mining in the very place we cultivated, thereby reducing our farming space. About 150 of us women decided to form Manumuma Women's Farmers' Association in 2020 and establish ourselves here in Matagelema.

"There is no more commotion now," Mamie adds, "we come together and agree on how to distribute our tasks and how many days and hours in a week to work under WFP's [peacebuilding] programme. Most of the group members are widows or single mums, and almost all of us raise our own as well as relatives' children, so we are determined to succeed so that we can feed our families."

Matagelema is situated about 1km away from a rural trading centre called Moriba, built out of the mining industry. Staff buses belonging to a big mining company crisscross the area all day; at night, floodlights silhouette a processing plant.

Sierra Leone has the largest deposits of rutile in the world - the mineral is used in the manufacturing of ceramics, paint, plastics and even food products that require a bright white colour. Moyamba district, where Matagelema and Moriba are found, is a major source of the rutile in addition to bauxite.

Sierra Leone is also naturally endowed with inland valley swamps, a high-potential ecosystem that, used effectively, can provide agricultural yields that result in food self-sufficiency. But due to limited technical knowledge and the labour intensity required to develop irrigations systems, most swamps have been abandoned. Farmers typically rely on shifting, upland agriculture, characterized by low yields and environmental damage.

WFP is working with groups such as Mamie's in six districts and 113 communities. More than 4,000 mostly women farmers are benefiting from its cash-based peacebuilding programme, to create and maintain irrigation schemes on 890 hectares of inland valley swamps.

"When there is no food, people get agitated and conflicts emerge," explains Swalihu Jusu, who oversees the project on the Government's behalf.

Such tensions could escalate because of competition for land. Communities were also troubled by the large ponds often left behind and the land degradation associated with mining, especially in the Moyamba and Pujehun districts, which host large mining and oil palm concessions.

The success of Mamie 's association began when the 150 women responded in January 2020 to a call from the town chief inviting people to form a farmer' group. The chief announced that the Government was available to support groups of farmers, not individuals, in cultivating alternative areas away from the miners.

However, the women failed to realize a big rice harvest as they lacked improved, quick-yielding seeds.

"We are expecting a big harvest this time around because we learned how to plant effectively, we are using high-yielding seeds and the bunds and canals now make it possible to retain fertilizer and water for us to plant crops several times in a year," Mamie says.

Even before their first harvest, the project's benefits are being felt, not least in the home of another Mamie, 31-year-old Mamie Feika, who is raising five children. Each time she receives her share of the money, which WFP pays per activity completed, she buys delicacies for the children and can afford schoolbooks and uniforms for the older ones.

WFP's assistance empowers women and youth with the skills, resources and means to grow more nutritious food using climate-smart methods that nurture the environment and build long term resilience. Part of the programme is implemented jointly with the UN Development Programme, under the UN Peacebuilding Fund; the other component is funded by the Japanese government.

Tagged:
Copyright © 2021 United Nations World Food Programme. All rights reserved. Distributed by AllAfrica Global Media (allAfrica.com). To contact the copyright holder directly for corrections — or for permission to republish or make other authorized use of this material, click here.