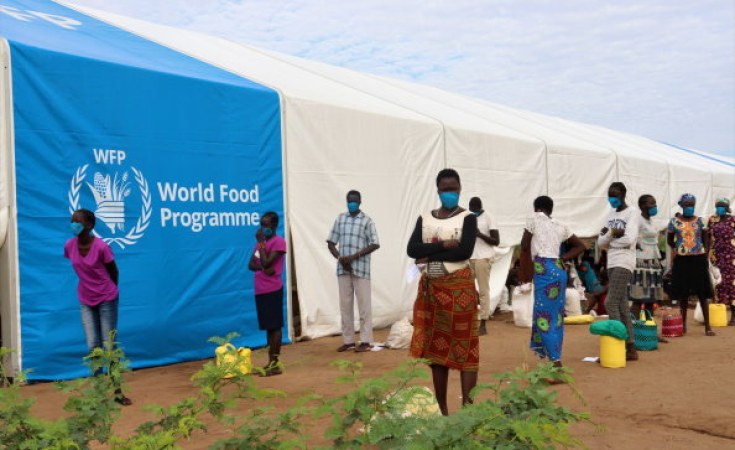 WFP
Refugees wait to collect food at a centre in Kakuma camp in Kenya.
Voice of America (Washington, DC)
By Mohammed Yusuf

Nairobi, Kenya — This week, Kenyan President Uhuru Kenyatta signed a new law that will give a half-million refugees in the country an opportunity to earn a living, instead of depending on the aid agencies that assisted them for three decades.

Victor Odero is a policy and advocacy adviser at the International Rescue Committee. He says the law will help aid agencies to focus more on creating opportunities that can improve the lives of the refugees.

"What stands out for me, and I suppose for humanitarian and also development and private sector actors, is that for the first time we see in legislation provisions that allow refugees to become self-reliant, which is very important because over the last couple of decades refugees have been wholly reliant on humanitarian assistance. I think this bill presents an opportunity for us to shift from this and to focus, to enable and empower refugees to become self-reliant," he expressed.

The refugee bill allows refugees to get education, jobs and integrate into Kenyan society.

Siad Tawane came to the Dadaab refugee camp as a toddler. He is a university graduate. The 34-year-old tells VOA the law can help him and other professionals in the camp to work in other parts of the country to sustain their lives.

"We are very much hopeful that refugees will get access to several opportunities such as work permits because that has been one of the things that we have been asking ourselves; Why the government of Kenya is not giving us the work permit for refugees to work elsewhere, not only in the camps? Some of us are educated, some of us have some skills and if they get the opportunity to move to form the camps and to move to other parts of Kenya. We are very hopeful we can deliver very many things, and we can earn a living."

The Kenyan government has said it will close the camps next year.

The United Nations World Food Program (WFP) says it has not been able to provide a full food ration to refugees since 2018, and last month it was forced to cut rations another 20 percent.

Twenty-seven-year-old Aza Nsabimana lives in the Kakuma refugee camp. She says getting employment and other opportunities can help her overcome the food shortage experienced in the camps.

"Here in the camp, our needs are too much. There are those who are jobless, and the food we are given in the camp is not enough for two months. And if you are jobless, life becomes hard for you. If they can get those opportunities to work for themselves, it can help so much."

In September, the WFP said it needs $40 million to feed refugees in Dadaab and Kakuma camps for six months.

The aid agencies in Kenya have argued refugees can contribute a lot to Kenya's economy and social fabric if given opportunities instead of remaining in the camps.